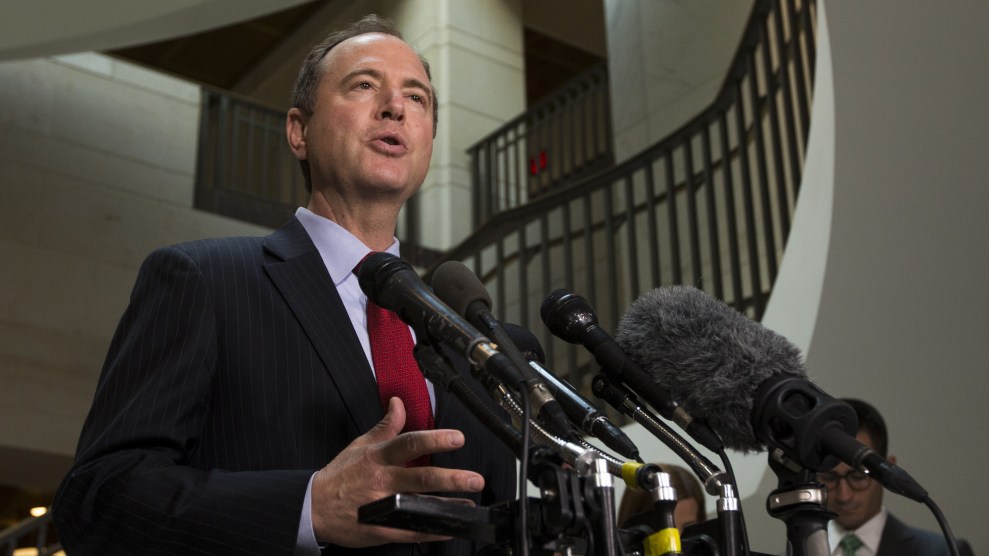 The House Intelligence Committee voted unanimously Monday to release a 10-page memo prepared by Democrats to rebut what they say are inaccuracies in an infamous memo written by aides to committee Chairman Devin Nunes (R-Calif.), which alleges FBI misconduct at the heart of the Trump-Russia investigation. Still, the memo’s contents may never see the light of day. President Trump and his allies could very likely feign a dedication to transparency but maneuver behind the scenes to block as much of the Democratic response as they can.

Trump now has five days to object to the release of Democratic memo. If he does, the full House could vote to override his decision. But there is little chance the Republican-dominated chamber will defy Trump, which means the decision will come down to whether the president, who has left little question he’d personally like to suppress the Democratic document, believes he can get away with blocking it after rushing to release the so-called Nunes memo.

For their part, Republicans on the committee seemingly didn’t think they could get away with blocking it. California Rep. Adam Schiff (Calif.), the top Democrat on the intelligence panel, told reporters after the vote Monday that Republicans had been effectively shamed into voting to release the document after they justified the release of the Nunes memo by arguing for transparency.

“It is going to be very hard for the White House, like it was hard for Republicans on the committee, to block release of this,” Schiff told reporters.

Schiff said he fears that the White House will officially release the memo but attempt to use redactions to block significant parts of it, and argue that blacked out sections are too sensitive to release. “We want to make sure that the White House does not redact our memo for political purposes, and obviously that’s a deep concern,” Schiff said.

He said he had already shared the memo with the FBI and Justice Department, something Nunes refused to do, before granting the FBI limited access to the document just before the committee released it.

Even without the public release of Schiff’s document, the Nunes memo, since its release last week, has already been largely rebutted. It claims the FBI and the Justice Department inappropriately used research by former British intelligence agent Christopher Steele to obtain a secret FISA surveillance warrant on Carter Page, a foreign policy adviser to the Trump campaign. The memo argues that FBI agents did not fully inform a FISA judge that Steele was paid to research Trump by a firm hired by Hillary Clinton’s presidential campaign and the Democratic National Committee. But, according to Schiff and intelligence officials cited in several reports, the FBI did in fact inform a FISA judge that Steele was backed by Democratic funding. Critics of the Nunes memo also say there is little chance that the alleged omission would be considered material by a FISA court.

And while Trump backers had hoped the Nunes memo would support their claims that the FBI’s investigation into Trump’s Russia ties began with the Page warrant, the memo itself concedes the investigation was launched after George Papadopoulos, another Trump campaign foreign policy aide, told an Australian diplomat in May 2016 that he learned from Russian contacts that the Kremlin had hacked Democratic emails. The Nunes memo also notes that the Page warrant was repeatedly renewed, a step that suggests the FBI continued to gather new evidence that Page might be acting as a Russian agent after the bureau ceased contact with Steele in November 2016.

Schiff’s memo is likely to hammer these points and raise other problems with Nunes’ memo.

Trump on Monday said Nunes might one day be considered “a great American hero” and also claims the memo vindicates his argument that investigations into his Russian ties have partisan motivations. Meanwhile, the president tweeted, “Little Adam Schiff … must be stopped!”

Schiff on Monday chalked up the president’s rhetoric to desperation resulting from the indictment and guilty pleas by four former Trump aides and the continuing stream of revelations about the campaign’s suspected coordination with Russia.

“There is a rising sense of panic clearly within the White House as well as on the Hill, and as a result we see what we often see in the criminal cases, which is that when the facts are increasingly incriminating of a defendant, there is an effort to put the government on trial,” Schiff said. “Committee Republicans have endeavored to put the FBI put the of DOJ on trial.”