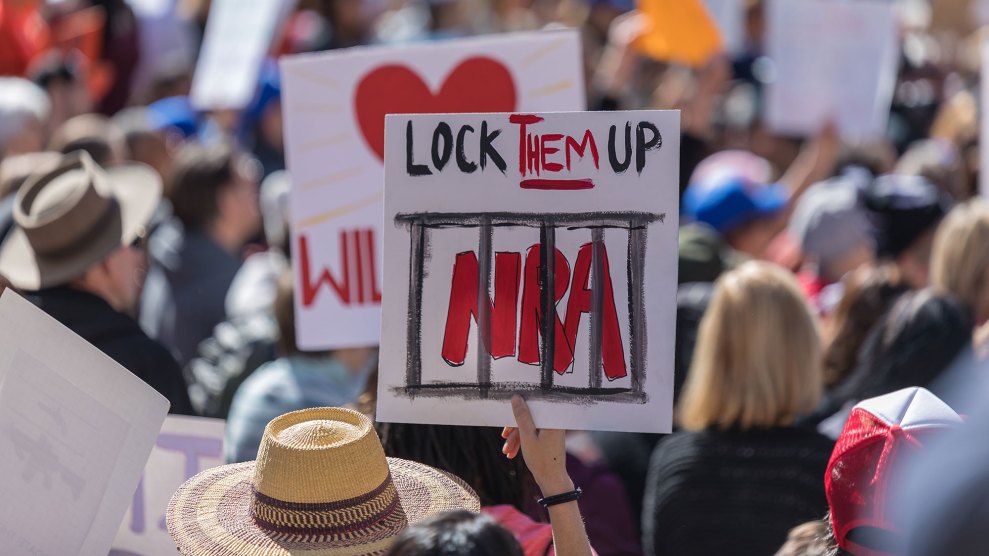 Being a member of the National Rifle Association has its perks, many of which are altogether unrelated to guns: Members enjoy discounts on rental cars, hotel rooms, wine, and even health and life insurance.

Or that was the case until Thursday. Just more than one week after the mass shooting at a high school in Parkland, Florida, First National Bank of Omaha, the nation’s largest privately-held bank, said it would no longer offer an NRA-branded Visa card to members following “customer feedback.” Scores of other companies have since followed its lead, severing their ties with the powerhouse gun-rights organization. Twitter users have showed their support of the movement—and anger toward the organization—with the hashtag #BoycottNRA.

Customer feedback has caused us to review our relationship with the NRA. As a result, First National Bank of Omaha will not renew its contract with the National Rifle Association to issue the NRA Visa Card.

Here are the corporations that have ditched the NRA (so far):

Just hours after First National Bank’s announcement on Thursday, Enterprise Holdings, a car rental conglomerate that owns major brands Enterprise, Alamo, and National, announced it would be ending its discount program for NRA members on March 26.

Thanks for contacting us. We ended the program – effective March 26. https://t.co/tRdHdoevfT

Thanks for contacting us. We ended the program – effective March 26. https://t.co/gwYeQR3xAh

Thanks for contacting us. We ended the program – effective March 26. https://t.co/BMqcoac4s2

The announcements continued Friday, with the security software corporation saying on Twitter it would cease to offer deals for NRA members. Symantec, the parent company of Norton and LifeLock, had previously given members $37 off a standard subscription to Norton software, according to ThinkProgress. The webpage advertising the discount has since been made unavailable.

Symantec has stopped its discount program with the National Rifle Association.

The insurance company, which offered perks to members including group discounts on auto insurance, told Bloomberg on Friday it had ended the program.

A home security company SimpliSafe, which gave NRA members two free months of home monitoring with the purchase of a home security system, said it had discontinued the program in a statement to ThinkProgress.

The two moving companies, which are owned by the same parent company, told ThinkProgress on Friday it was ending its relationship with the gun rights organization: “We have asked them to remove our listing from their benefits site,” a spokesperson for parent company SIRVA said. On Tuesday, before it ended its relationship with the NRA, a representative of North American called it a “great program” in an interview with ThinkProgress.

Hertz, another major car rental company, announced Friday that it would no longer offer a discount to NRA members, which had been up to 25 percent off base rental rates, according to ThinkProgress.

We have notified the NRA that we are ending the NRA’s rental car discount program with Hertz.

The telemedicine company told ThinkProgress in an email Friday it would no longer give NRA members a discount on the monthly rate for its telemedicine services.

An insurance company, Chubb told Reuters on Friday it will end its participation in an insurance policy for NRA members, called “NRA Carry Guard.” Though a spokesperson said the company had notified the NRA three months ago of its plans to end its involvement.

Yet two more car rental companies ended their relationships with the NRA on Friday, ThinkProgress reported. The companies, which are owned by the same parent company, previously gave up to a 25 percent discount to members on base rental rates, like Hertz.

According to ThinkProgress, companies including Vinesse Wines, which operates the “official wine club of the NRA,” and HotelPlanner.com, which gives members access to an exclusive hotel booking website, have yet to end their relationships with the NRA.

On Saturday morning, Delta airlines announced it would no longer provide discounted rates to the National Rifle Association, becoming the 16th company to cut its ties with the organization since the February 14th shooting.

Delta is reaching out to the NRA to let them know we will be ending their contract for discounted rates through our group travel program. We will be requesting that the NRA remove our information from their website.

United is notifying the NRA that we will no longer offer a discounted rate to their annual meeting and we are asking that the NRA remove our information from their website.