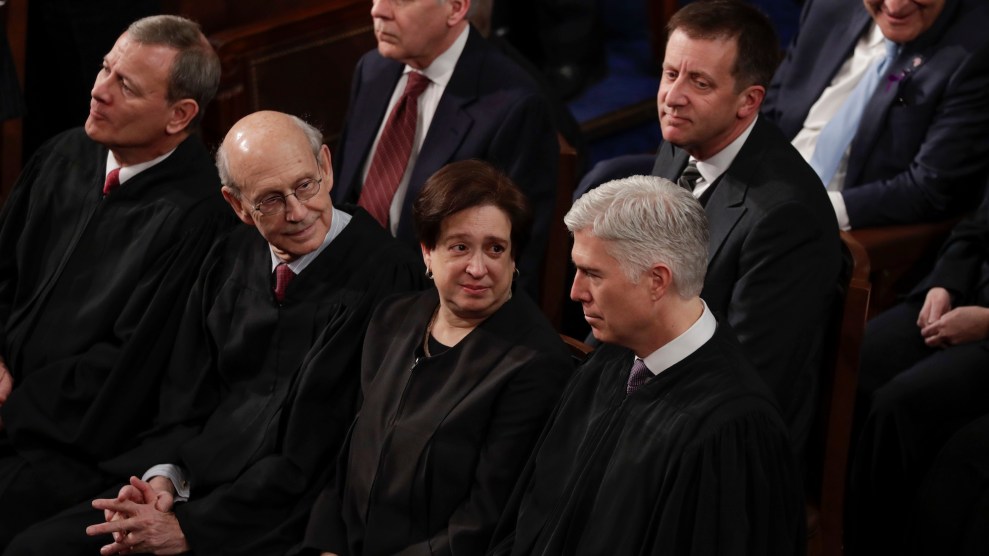 Next Monday, the United States Supreme Court will hear oral arguments in Janus v. AFSCME, a case that boils down to the question of whether public-sector unions have a right to collect dues from workers they bargain on behalf of, even if they are not union members. If the court’s conservative majority rules in the plaintff’s favor, it could choke off a critical source of union funding.

Forced union membership is illegal, but many unions collect “fair-share” or agency fees from employees in unionized workplaces who do not join the union but enjoy the advantages of being represented by it nonetheless. The fee, so named for the idea that everyone should chip in to help cover costs the union racks up bargaining for things like better pay and safer working conditions, is an important union revenue stream, especially as the labor movement struggles to bounce back from a decades-long decline.

Mark Janus, the case’s plaintiff, is a child support specialist at the Illinois Department of Healthcare and Family Services. He pays an agency fee to the American Federation of State, County and Municipal Employees (AFSCME), but he’d rather not. His legal team’s argument is straightforward: As a matter of free speech, no one should be forced to pay fees to a union they disagree with politically. Anti-union crusaders, however, have been far less restrained in explaining their motives for championing Janus. The State Policy Network, a web of 66 free-market think tanks, has described the case as a way to “defund and defang” its adversaries. The Liberty Justice Center, one of the entities representing Janus, is a partner in the SPN network.

Unions argue that the free speech question surrounding union dues has been settled for more than 40 years. In the 1977 case Abood v. Detroit Board of Education, which Janus seeks to reverse, the Supreme Court ruled unanimously that fair-share fees posed no significant threat to public employees’ right to free speech. As the court itself explained at the time, public employees who disagree with the union representing them “is largely free to express his views” and “is free to participate in the full range of political and ideological activities open to other citizens.” The high court considered a similar case in 2016, but deadlocked following the death of Justice Antonin Scalia. Justice Neil Gorsuch, whom President Donald Trump appointed last year, will likely cast the deciding vote in Janus.

The court also ruled in Abood that to protect employees’ free speech rights, unions needed to erect a wall between their bargaining and political operations. Janus’ lawyers and other anti-union groups argue that this wall is a mirage. Because public-sector union negotiations involve the allocation of public resources, the process will always be inherently political. Therefore, they argue, employees become unwitting participants in a political agenda they may not agree with.

But as one AFSCME union official explains, the core of public-sector union work revolves around “strategies and proposals to directly improve public services. People expect trash to get picked up on time every week, roads to get plowed when it snows, clean water to come out of the sink everyday.” In other words, good-government stuff that the average person doesn’t consider a partisan matter.

The free speech argument is the same one put forward by the backers of so-called “right-to-work” laws, which are in effect in 28 states and allow employees to skip out on paying fees to the unions that represent their workplaces. A ruling against the union in Janus would essentially make right-to-work the default across the entire public sector, affecting five million employees.

Since federal law requires unions to represent every employee in a bargaining unit, unions have long argued that right-to-work laws open the floodgates to “free riding.” According to the Economic Policy Institute, a liberal think tank, 20 percent of public employees in right-to-work states are free-riders, compared to around 7 percent in non-right-to-work states. “We expect to lose some members” if the court rules against fair-share fees, the AFSCME official says. “Our members are working in middle-class, working-class professions. Some are living paycheck to paycheck” and may conclude that, in the short term, union dues take a backseat to a mortgage payment or water bill.

Even as anti-union outfits paint the Janus case as a can’t-miss opportunity to choke off funding to the labor movement, the AFSCME official cast it in less extreme terms. “Overwhelmingly, we expect that vast majority of our members are going to stick together in their unions and fight back against these attacks,” the official says.