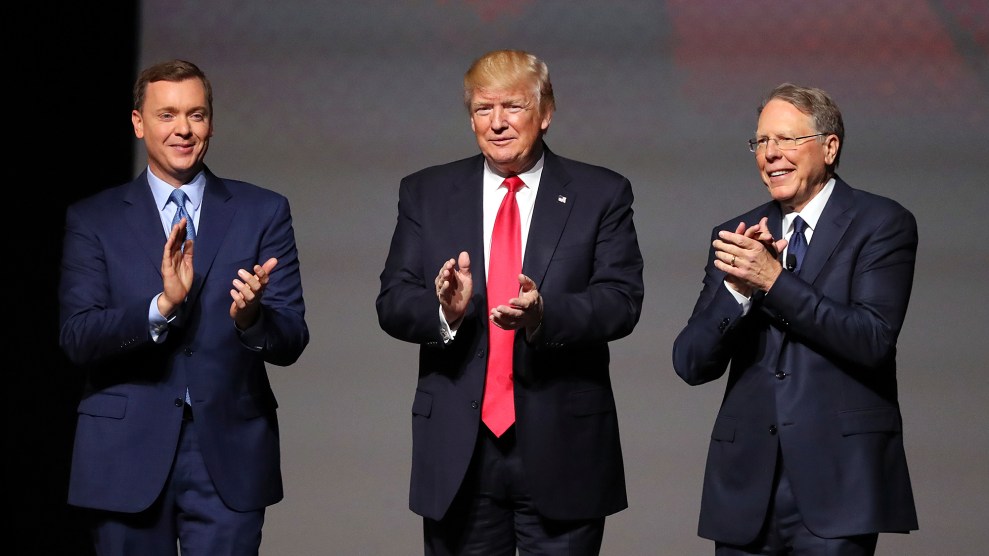 A week after the Parkland school shooting left 17 people dead, President Donald Trump took to Twitter to praise National Rifle Association CEO Wayne LaPierre. “What many people don’t understand, or don’t want to understand, is that Wayne, [NRA official] Chris [Cox] and the folks who work so hard at the @NRA are Great People and Great American Patriots,” Trump wrote Thursday, shortly before LaPierre gave a speech at the Conservative Political Action Conference in which he rejected calls for tough gun legislation.

What many people don’t understand, or don’t want to understand, is that Wayne, Chris and the folks who work so hard at the @NRA are Great People and Great American Patriots. They love our Country and will do the right thing. MAKE AMERICA GREAT AGAIN!

Over the decades, LaPierre has amassed a record of inflammatory and paranoid rhetoric, often warning that Americans are on the verge of having their guns confiscated as the country moves toward socialism. Here is a rundown some of the most incendiary comments LaPierre has made since joining the NRA in 1977.

1987: The New York subway shooter is a “political prisoner”

In 1984, Bernhard Goetz shot four black teenagers on the New York subway after they asked him for $5. He stopped shooting after running out of bullets. One victim was left paralyzed. “My intention was to murder them, to hurt them, to make them suffer as much as possible,” Goetz told police. “If I had more bullets, I would have shot them all again and again. My problem was I ran out of bullets, and I was gonna gouge one of the guys’ eyes out with my keys afterwards.” Goetz was eventually convicted on a weapons charge but acquitted of attempted murder.

In a 1987 letter detailed by The Wire, LaPierre told New York Gov. Mario Cuomo that Goetz had “suffered three long years as a political prisoner, exonerated of real crime by a jury, yet ultimately condemned to jail by a New York judge inflicting his own outrageous, personal biases against this victim.” LaPierre’s claim was misleading; Goetz had been released on bail before eventually serving 250 days in jail for the gun conviction. Regardless, LaPierre urged the governor to pardon Goetz.

1994: The media’s propaganda machine is more effective than Hitler’s

At the NRA’s 1994 convention, LaPiere said, “Our media has become the master over the very Constitution that created it.” He added, “Forget Stalin’s Russia. Forget Hitler’s Germany. The mightiest propaganda machine the world has ever known is right here in 1994 America.”

After the Parkland shooting, Rush Limbaugh dug up LaPierre’s claim to argue that nothing has changed. “[Democrats] don’t want a solution,” Limbaugh said. “That is what Wayne LaPierre was saying 18 years ago on ABC.”

2017: The “left-wing socialist brigade” is preparing a violent assault on democracy

At last year’s CPAC, LaPierre said, “I think we all agree we live in a more angry, dangerous world than we’ve seen in a long time.” Violent crime in the United States is actually down dramatically since the 1990s. Nevertheless, LaPierre pointed to three culprits: The late community organizer Saul Alinsky, Chicago Mayor Rahm Emanuel, and ISIS:

It’s in the Saul Alinksy strategy of sowing grievance and indignation to raise holy hell. It’s in the leftist radical plan to tax capitalism to collapse. And it’s in the Rahm Emanuel doctrine of ‘Never let a crisis go to waste.’ And it’s in the ISIS dream of a worldwide caliphate.

From there, LaPierre pivoted from the San Bernardino and Pulse nightclub shootings to the “left’s violence against America,” which he said included efforts to use the courts to try to block Trump’s travel ban. He was encouraged by Trump’s electoral victory, but he said America’s “long nightmare” could be just beginning. He warned that the “left-wing socialist brigade” and its bands of anarchists and Marxists was gathering and “willing to use violence against us.” He added, “And they’ve got money—billions—from Michael Bloomberg, George Soros, and a vast network of leftist organizations.”