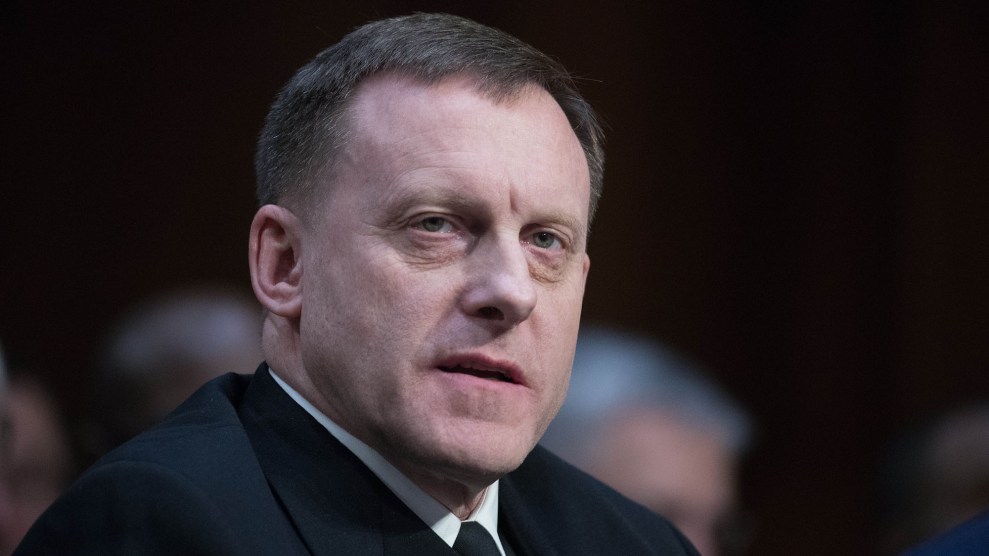 Admiral Mike Rogers, the head of the National Security Administration and the US Cyber Command, warned the Senate Armed Service Committee on Tuesday that the muted US government response to Russia’s interference in the 2016 elections would fail to deter Russian President Vladimir Putin from launching a simliar, future campaign.

In a response to questioning by Sen. Elizabeth Warren (D-Mass.), Rogers said “I believe that President Putin has clearly come to the conclusion that there’s little price to pay here…and that therefore I can continue this activity.”

The hearing also focused on the NSA and Cyber Command’s operating authorities. Sen. Jack Reed (D-R.I.) asked Rogers whether he had received orders to go after the Russian meddling operation where it originated: “Have you been directed to do so given the strategic threat that faces the United States and the significant consequences you recognize already?”

“President Putin has clearly come to the conclusion that there’s little price to pay here.”

“No I have not,” Rogers responded, adding that based on authority he already has, he has “directed … to begin some specific work,” but wouldn’t elaborate in a public setting. Certain overt actions by Cyber Command, a branch of the US military, could be considered an a act of cyber warfare.

“But essentially, we have not taken on the Russians yet,” Reed pressed. “We’re watching them intrude in our elections, spread misinformation, become more sophisticated, try to achieve strategic objectives that you have recognized, and we’re just, essentially, sitting back and waiting.”

Rogers didn’t totally agree with Reed’s characterization, but, he said, “It’s probably fair to say that we have not opted to engage in some of the same behaviors that we are seeing.”

Under further pointed questioning—Sen. Bill Nelson (D-Fla.) asked “What’s the hold up?”—Rogers defended the agency’s inaction pending further instruction. “The challenge for us is that we have this thing called ‘the law’ and legal framework that right now shapes what [the Department of Defense] can and cannot do,” Rogers explained, adding that he’d need a specific policy directive with specific authority to “punish” the Russians, as Nelson put it.

According to Ryan Duff, a cybersecurity expert who used to work at Cyber Command, the agency may not be properly situated to do the work Nelson and Reed seemed to be asking about:

It is important to note that such an action from CYBERCOM would be legally considered a military attack against Russia which has massive implications. I would expect any response ordered would come from the CIA under covert action instead of military action by CYBERCOM. https://t.co/Olr6U5uAxK

Rogers’ answers to the questions follow similar statements the he and the leaders of other US intelligence agencies made during another Senate inquiry earlier this month. From Mother Jones‘ previous reporting:

“I can’t say I’ve been specifically directed to blunt or actually stop” Russian influence efforts, NSA Director Mike Rogers replied. Rogers added that he considers it his agency’s job to gather intelligence for policymakers rather than act on it.

CIA Director Mike Pompeo, appearing eager to defend Trump, said the president has generally asked the intelligence community to address threats, adding that the CIA takes “all kinds of steps to disrupt what the Russians are trying to do.” But he did not say that Trump has specifically directed the agency to prevent Russian interference.

FBI Director Christopher Wray said he has not been “specifically directed by the president” to combat Russian meddling. Dan Coats, the director of national intelligence, similarly said Trump has not urged him to address Russian meddling. Nor has Trump pressed for any interagency effort to combat Russian interference, Coats conceded. “We essentially are relying on the investigations that are underway,” he said.

WATCH: NSA Director Rogers on Russian cyberattacks: “I believe that President Putin has clearly come to the conclusion there’s little price to pay here, and that therefore I can continue this activity.” pic.twitter.com/3c5gGLvrAS