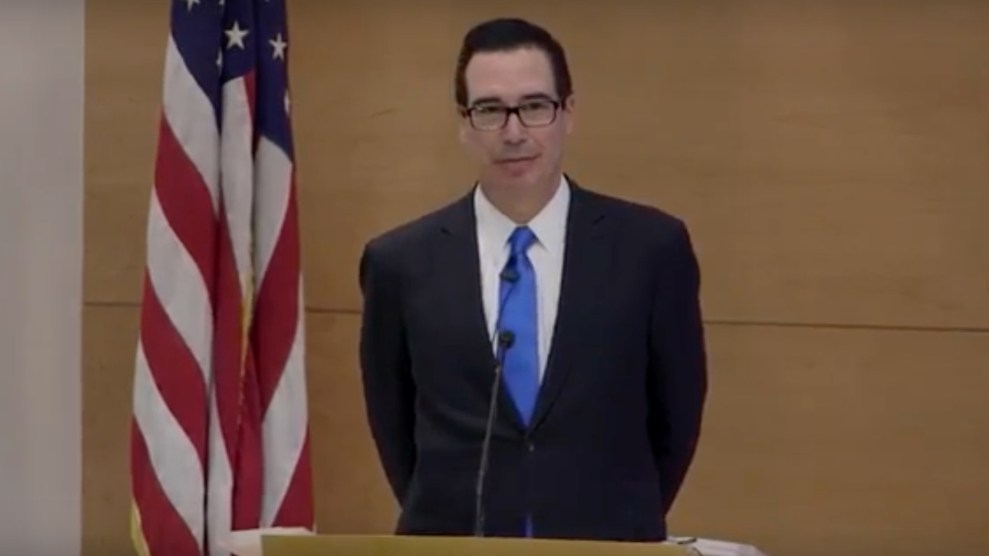 Treasury Secretary Steven Mnuchin probably didn’t expect to get a hard time when he visited the the University of California Los Angeles for a public conversation with Marketplace host Kai Ryssdal in late February. But things went so badly that, when the dust had cleared, Mnuchin “retracted his permission” to release a video of the event.

But thanks to the California Public Records Act, the video Mnuchin didn’t want you to see is now public. In an email sent after 5 pm on Friday, UCLA announced that it had just “received consent” from the Treasury Department to post the full video online. You can watch it here.

In it, an uncomfortable Mnuchin tries to defend Trump administration policies to an unfriendly audience. After dealing with Ryssdal, who effectively cross-examined the finer points of his economic policy for 30 minutes, the former investment banker and Hollywood executive producer had to endure members of the audience expressing their disapproval for the rest of the one-hour program.

Audience members hissed several times, visibly discomfiting Mnuchin. For a few minutes the treasury secretary was forced to stop speaking while campus police removed three protesters who had heckled him.

Some more highlights: At 9 minutes in, Mnuchin starts speaking and the audience begins hissing. He acknowledges that it’s the first time he’s ever spoken at a university: “Let’s see how this goes. I’m gonna do this a little bit different. This isn’t like a traditional thing. I normally go to speak to people who want to listen to me speak.” Seven minutes later, the three protesters are removed from the auditorium by campus police.

Afterward, Ryssdal and Mnuchin sit down to begin their conversation. At the 30 minute mark, Mnuchin asks Ryssdal to go to audience questions. Ryssdal responds, “I’ve got you down for half an hour, so maybe we’ll go a little while longer?” After Ryssdal asks whether the Republican tax plan’s supposed three percent GDP boost will mean the tax cut will “pay for itself,” Mnuchin accuses Ryssdal of being biased. Ryssdal responds: “No, sir, these are facts.”

Ryssdal and Mnuchin quit sparring at about the 43 minute mark, when the forum opens to audience questions. Students and faculty ask Mnuchin to clarify some of his policy points, and to talk broadly about his perspective on economic policy. At the 53 minute mark, a sixth grader asks Mnuchin about how the GOP tax cut is “just.” He finishes, “How can you live with this?” to applause. Ryssdal asks Mnuchin if he thinks the GOP “blow it on the sales pitch on the tax bill.” Mnuchin responds cryptically, “the results will be clear, or they won’t be clear.”

“How are you personally benefiting from the tax bill?” a woman asks him shortly before the event ends. “To come into government, I had to kind of get rid of all my investments and everything else, and I can assure you, I don’t believe I’m personally benefiting from the tax bill,” says Mnuchin, who may be worth as much as $500 million. “What I am benefiting from is, hopefully, the American economy will do better, and that’s hopefully something that’s good for everybody in this room.” Now everyone outside that room can see what Mnuchin had hoped to keep under wraps.