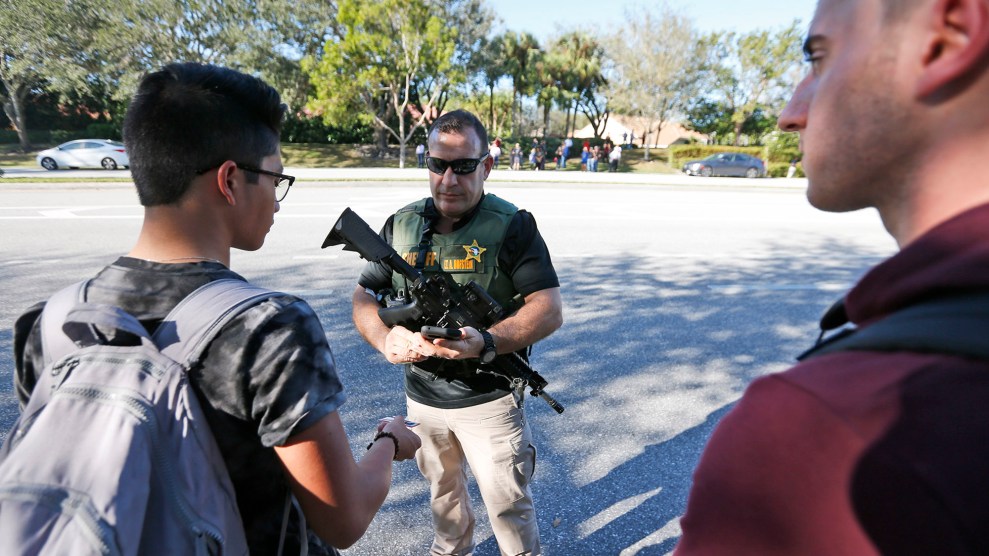 A law enforcement officer talks with students, Wednesday, Feb. 14, 2018, in Parkland, Fla. A shooting at Marjory Stoneman Douglas High School sent students rushing into the streets as SWAT team members swarmed in and locked down the building. Wilfredo Lee/AP

The Florida Senate is holding a rare Saturday session to debate a bill that includes a set of modest gun control measures—and, controversially, a program that would arm teachers in state schools. The move comes several weeks after a Valentine’s Day shooting at Stoneman Douglas High School in Parkland, Florida, left 17 people dead and reignited a debate over whether teachers should have guns in the classroom. Members will take up a wide range of questions before moving the bill for a final vote on Monday.

The bill in question takes up a number of issues at the heart of the debate over gun safety, including raising the minimum age to buy a rifle from 18 to 21, creating a waiting period for rifle sales (currently, one only exists for handgun purchases), and creating new mental-health programs for schools. But the most contentious part of the bill would allow teachers to carry concealed weapons on school grounds if they complete a law enforcement training program.

Specifically, versions of the bill that are currently floating around Florida’s Legislature would direct $67 million of state funds to a so-called “school marshal” program that would arm 10 teachers in every school, leading to roughly 37,000 gun-toting educators across the state. Each teacher would have to complete 132 hours of training through a law enforcement program that includes background checks, psychological exams, and drug testing. And teachers who sign up could earn a one-time $500 bonus for agreeing to participate. Republican Rep. José Oliva, who sponsored the bill, said that it’s up to school superintendents to decide whether the teachers would have to buy their own firearms of if they’d be provided by their school districts.

Would arming teachers actually stop school shootings? Probably not, according to study after study.

Would arming teachers actually stop school shootings? Probably not, according to study after study that’s found that making guns more easily available doesn’t stop gun violence, but increases it. Still, some districts in Texas and Ohio have already quietly started allowing teachers to carry concealed weapons to class, like this one profiled by the New York Times in February, which spends more than a quarter of a million dollars annually on safes, cameras, radios, and ammunition as part of the effort.

There’s also the not-so-small issue of adding yet another task to cash- and time-strapped public school teachers’s job descriptions. One educator told the Boston Globe, “The day they ask me to carry a gun in the classroom is the last day I teach.” Jessica Tang, president of the Boston Teachers Union, elaborated: “Our expertise, our job, our skill set is around teaching and instruction and supporting students and motivating them and inspiring them. It should not be part of our job description to learn how to shoot a gun. That’s what you do in the military, and that’s what you do as a police officer.”

Other teachers have voiced similar outrage. In the aftermath of the Parkland shooting, some even took to Twitter with the hashtag #ArmMeWith to describe the long list of things that would make their classrooms better instead of guns:

#ArmMeWith enough school psychologists, social workers, & teaching assistants to ensure my students are getting all of the help they need before it becomes too much for them #SpecialEducation #teacher

I’m trained to teach, not to shoot. Instead of arming teachers with more gun, supply us with materials & resources we desperately need. From 1:1 devices to #2 pencils. From mental health care to healthy nutrition. #ArmMeWith #DeafEd pic.twitter.com/evR6ufuBw6

I am a teacher educator. Arm my students with culturally relevant pedagogy, restorative practices and commitment to community #ArmMeWith

The Florida Senate’s website says that the session will last “until completion.” Which means that lawmakers, and the rest of the state, are in for a very long day.