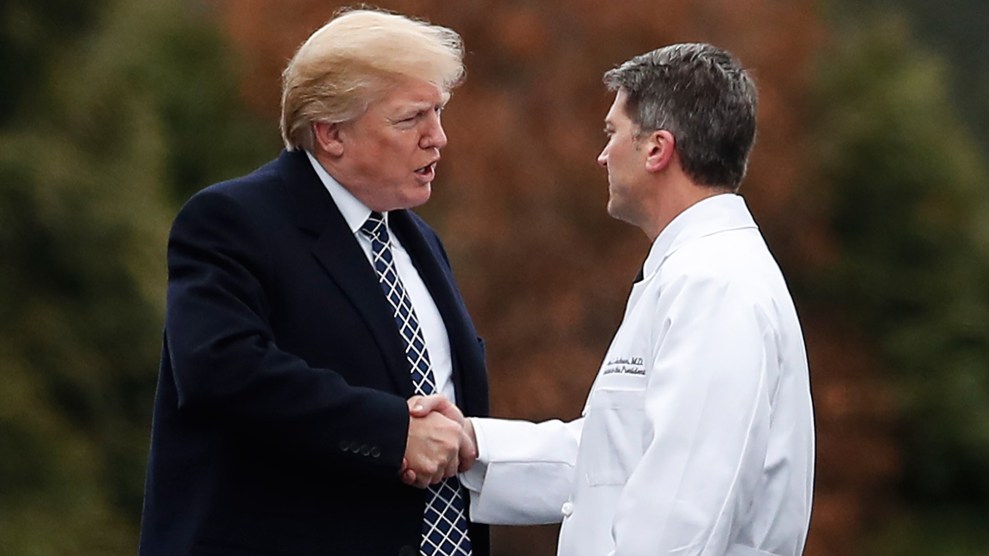 On Wednesday, President Donald Trump announced that he would replace embattled Veteran Affairs Secretary David Shulkin with his personal physician, Rear Admiral Dr. Ronny Jackson. His ouster has been rumored for weeks, with chatter getting even louder in the wake of an inspector general report that slammed Shulkin for going sightseeing and paying for his wife’s airfare during a $122,000 business trip in Europe. But in an op-ed for the New York Times on Thursday morning, Shulkin seemed to imply that was not the real reason he was fired; he warned that in-fighting among administration officials who sought more privatized health care had actually led to his ousting, calling privatization at the expense of the agency’s current health care system a “terrible idea.”

“They saw me as an obstacle to privatization who had to be removed,” Shulkin wrote. “That is because I am convinced that privatization is a political issue aimed at rewarding select people and companies with profits, even if it undermines care for veterans.”

Shulkin, a former hospital executive who was the sole holdover from the Obama administration, has been under scrutiny in recent months for abusing travel on the taxpayers’ dime—behavior not unlike several of his fellow cabinet secretaries in this administration.

Despite the missteps, Shulkin served as a moderating force holding the line as the White House and others pushed for privatizing more health care services for veterans paid for by the taxpayer. He wrote in the Times that officials pushing for privatizing health care at the agency, which many veterans’ groups oppose, “unfortunately fail to engage in realistic plans regarding who will care for the more than 9 million veterans who rely on the department for life-sustaining care.” He added that the private sector was “ill-prepared to handle the number and complexity of patients that would come from closing or downsizing V.A. hospitals and clinics.” During his tenure, Shulkin also helped push for legislative measures aimed at improving services for veterans, including expanding the GI Bill, which received the president’s signature, and ensuring accountability inside the sprawling agency.

Veterans groups don’t seem to be thrilled about the prospect of Jackson, Shulkin’s replacement, who has spent his career as a Navy officer and has been the top White House physician for Trump and President Barack Obama. He lacks the management and government experience typical of traditional cabinet secretaries, and he’s taking over the second-largest federal agency—one that’s been chronically mismanaged and would pose a challenge even for an experienced manager. “Looking at his background we don’t see anything that indicates he’s capable of running a $200 billion agency,” Joe Chenelly, executive director of AmVets, told the Wall Street Journal. “The VA is a lot more than just a medical system.”

Jackson hasn’t yet made clear his views toward privatization. But lawmakers have made clear that will be a big point of contention during his confirmation process. Sen. Bernie Sanders, who sits on the Senate Veterans Committee, for instance, urged his peers to not “approve any nominee for secretary who supports the privatization of the VA.”

The next Secretary of Veterans Affairs must be laser-focused on doing right by our nation’s heroes – and that includes fighting dangerous calls to privatize this vital department. https://t.co/2fK3reB7sG

If Jackson proves unable or unwilling to oppose VA privatization, Pres. Trump should withdraw his nomination. We need a fighter for veterans, not a figurehead focused on corporate profits.

“I came to government with an understanding that Washington can be ugly, but I assumed that I could avoid all of the ugliness by staying true to my values,” Shulkin concluded in his Times op-ed, adding: “As I prepare to leave government, I am struck by a recurring thought: It should not be this hard to serve your country,”