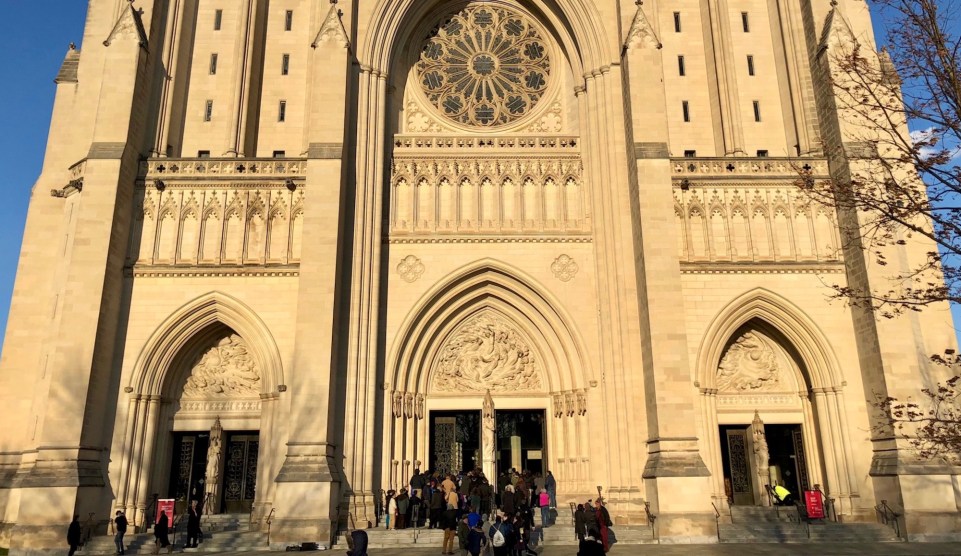 Attendees begin to file into the National Cathedral in Washington, D.C., for the evening's "March for Our Lives" interfaith vigil and service on Friday, March 23, 2018Kara Voght/Mother Jones

On Friday evening, Philip Schentrup of Parkland, Florida, stood behind the lectern in Washington’s National Cathedral to share a story about his daughter, Carmen, who had been among the 17 killed at Marjory Stoneman Douglas High School on February 14. Through tears, with his arm wrapped tightly around April, his wife, Schentrup said that Carmen, who died a week before her seventeenth birthday, had been a National Merit Scholarship semifinalist.

But she never found out, he said. The letter arrived on February 15.

Schentrup’s was one of the the many heartbreaking stories that were recounted during an interfaith prayer vigil on the eve of March for Our Lives, Saturday’s rally demanding gun control reform from federal lawmakers. Students and families from Parkland, Florida, with hundreds of supporters, were led in prayers, sermons, and songs by faith leaders. They honored victims of gun violence, offered solace to the grieving, and welcomed calls to action for gun violence to stop.

“God is about to make a new covenant, with a new generation, who understands what it means to have the law written on your hearts.”

“God is about to make a new covenant, with a new generation, who understands what it means to have the law written on your hearts,” said Reverend Canon Mark Sims, an Episcopal minister at the Schentrup family church in Florida, “instead of wrapped up in a distorted understanding of a Second Amendment.”

In some ways, a faith-based service would seem out of place on the eve of an event almost wholly defined by teenage activism. Recent studies from the Pew Research Center have shown that the youngest Americans have the lowest levels of religious commitment and increasingly identify with “spiritual” interests but not religious denominations. But Reverend Rob Schenck, an evangelical minister and founder of The Dietrich Bonhoeffer Institute―one of the vigil’s sponsor organizations―says he’s seen those spiritual tendencies activate and align with faith leadership in moments of tragedy.

“Some of the Parkland students were asking ‘Are there churches in Washington? Are there pastors we can connect with?’” he says. “Pastoral support is very important in times like these.” Some of the largest groups gathered at the Cathedral were high students who had traveled together from Scranton, Pennsylvania, and South Bend, Indiana.

The evening brought together over 20 faith leaders representing about a dozen religious denominations, who presented a unified front on an issue that is divisive not only politically and socially, but also among religious organizations. A 2013 survey conducted by the Public Religion Research Institute found that 67 percent of Catholics supported gun control measures, compared with only 38 percent of white evangelical Protestants. But the only fissures mentioned over the course of the evening were those between gun violence activists and the lawmakers who have failed to take action.

“Tomorrow our children will march for their lives. They will march for a world that frees them from the bondage and tragedies of unnecessary violence. And I will be right there with them…loving them every step of the way.”

Several faith leaders took a moment to laud that new generation and thank them for holding older generations accountable for their failure to do more to address gun violence. “Students, this nation’s adults, we have failed you,” said Rabbi Jonah Dov Pesner of the Religious Action Center of Reform Judaism.

Other speakers also honored the activists who had come before, especially those who have long fought on behalf of communities where senseless shooting deaths are common and often ignored. Lucy McBath, whose only son, Jordan, had been shot and killed while listening to music in his car with his friends, said the varied circumstances under which lives are lost to gun violence―whether community shootings like Jordan’s, or the school massacre that brought tragedy to Parkland―still does not distract from the universality of the suffering and the universal need for reform.

“Tomorrow our children will march for their lives,” said the self-described “surrogate mother” of student marchers. “They will march for a world that frees them from the bondage and tragedies of unnecessary violence. And I will be right there with them…loving them every step of the way.”

As the reflections drew to a close, attendees lit long, white candles in remembrance of those lost to gun violence. Diego Pffeifer, a Stoneman Douglas student who helped organize Saturday’s march, concluded the evening with a call to action. He described life before the shooting, how his biggest worry had been auditions for a musical theater production, and how he’s haunted by the empty seat next to him in his AP Literature class, where his friend, Carmen Schentrup, used to sit.

He recalled the time he and Carmen were supposed to do a musical performance together, but circumstances prevented him from showing up on time, and she had to go it alone. “I failed Carmen when she was alive,” he said. “I’m not going to fail her now that she’s dead.”

Echoing the night’s theme of unity, he urged attendees to “come together as a family,” no matter “if you’re red, or blue, or whatever your faith is.” And he asked those gathered to remember that Saturday’s march was just the beginning of political action, not the end, encouraging everyone to register to vote, so “our actions become our words.”

At the end of his speech, he clasped his candle in a fist of victory and thrust it into the air. Across the cathedral, attendees joined him, lifting their candles in a wave of tiny flames.