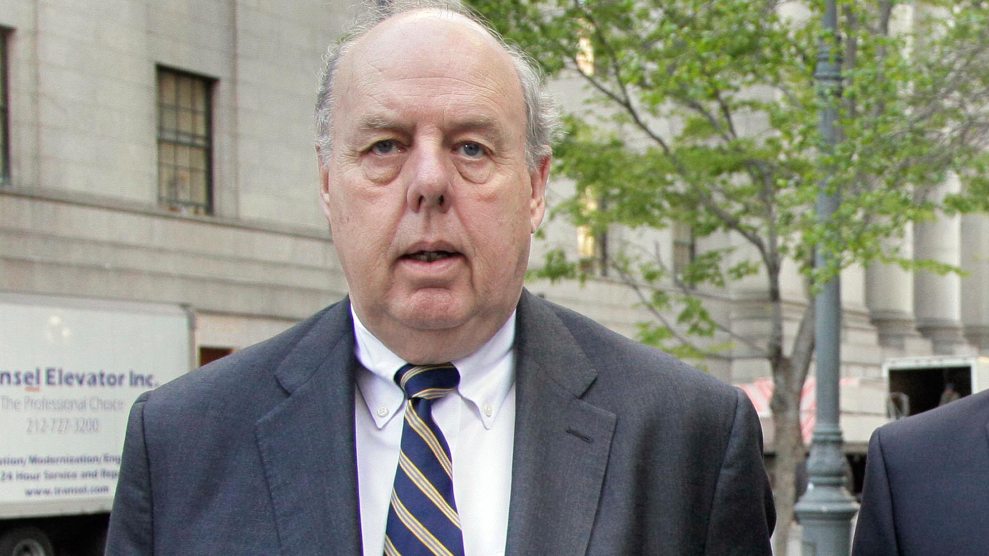 The head of a team of White House lawyers advising President Donald Trump on Robert Mueller’s investigation into Russian meddling in the 2016 election has resigned, according multiple reports. According to two sources who spoke to the New York Times, John Dowd resigned on Thursday because the president “was increasingly ignoring his advice” on how to respond to the special counsel’s probe into Russia and possible collusion with members of Trump’s team. More from the New York Times:

Under Mr. Dowd’s leadership, Mr. Trump’s lawyers had advised him to cooperate with the special counsel, Robert S. Mueller III…The president has instead in recent days begun publicly assailing Mr. Mueller, a shift in tone that appears to be born of the president’s concern that the investigation is bearing down on him more directly. He has also privately insisted he should sit for an interview with the special counsel’s office, even though Mr. Dowd believed it was a bad idea.

On Twitter last week, the president attacked the New York Times over reporting that he was unhappy with his legal team. “Wrong,” he wrote. “I am VERY happy with my lawyers, John Dowd, Ty Cobb and Jay Sekulow.”

The Failing New York Times purposely wrote a false story stating that I am unhappy with my legal team on the Russia case and am going to add another lawyer to help out. Wrong. I am VERY happy with my lawyers, John Dowd, Ty Cobb and Jay Sekulow. They are doing a great job and…..

In September, Dowd and Cobb were overheard by a Times reporter discussing details of conflict among members of Trump’s legal team. Cobb referred during the lunch to a fellow member of Trump’s defense team as “a McGahn spy,” suggesting distrust of White House counsel Donald McGahn. The attorneys conducted their sensitive conversation at an outdoor table at BLT Steakhouse, a popular DC restaurant a few doors down from the Times’ Washington bureau and close to the offices of a slew of media organizations closely covering Trump’s legal maneuvers.

In December, Trump seemed to make news when he tweeted that he had fired National Security Adviser Michael Flynn because Flynn had “lied to the FBI.” The tweet appeared to reveal that Trump knew Flynn had misled federal agents when Trump pressed then-FBI director James Comey to drop an investigation of Flynn—arguably an admission of obstruction of justice. Dowd then announced that he had in fact written the tweet and said the claim that Trump had fired Flynn for lying to agents was his own “sloppy” mistake. Dowd said after that incident that he was “out of the tweeting business” and “did not mean to break news.”

But this month, Dowd made news when he seemed to suggest in an email to the Daily Beast that Mueller should be fired. “I pray that Acting Attorney General Rosenstein will follow the brilliant and courageous example of the F.B.I. Office of Professional Responsibility and Attorney General Jeff Sessions and bring an end to alleged Russia collusion investigation manufactured by McCabe’s boss James Comey based upon a fraudulent and corrupt dossier,” Dowd wrote.

Dowd originally said he was speaking for Trump, then said he was expressing his personal views. That amended claim was quickly called into question by Trump, who began tweeting out attacks on Mueller’s inquiry—this time without Dowd claiming authorship of the tweets. If nothing else, Dowd’s exit will ensure an end to confusion over whether he is speaking for the president.