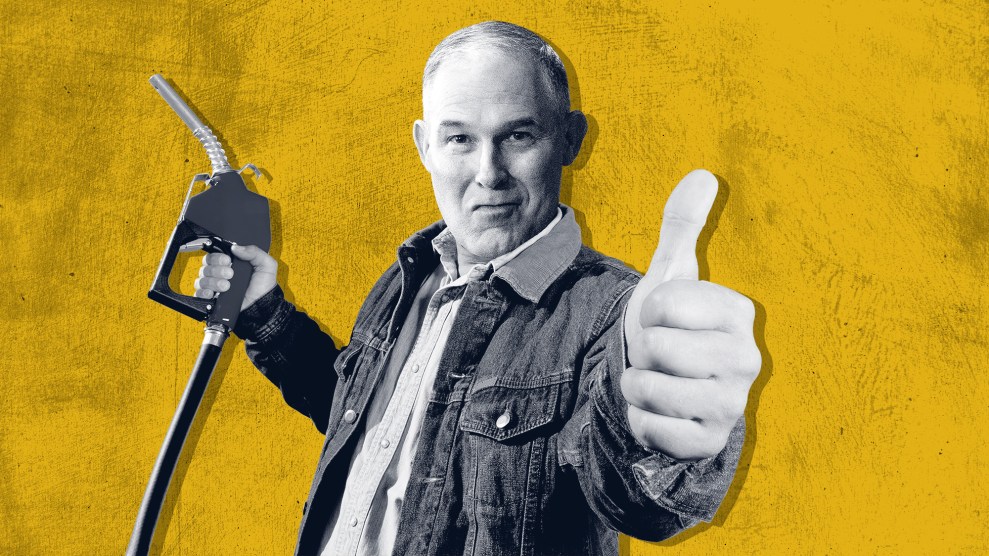 With her team at the US Environmental Protection Agency, other government officials and engineers from 15 automakers, she pored over proprietary data and hashed out which fuel-economy standards would be achievable. Trade associations and companies’ Washington lobbyists were not invited. When firms argued something wasn’t possible, the EPA pushed back, demanding evidence.

The final deal, reached in 2012, would have spurred automakers to nearly double the average fuel efficiency of new cars and light trucks by 2025. Advocates said the move would save consumers money and contribute significantly to combating climate change.

Now it’s being taken apart. EPA Administrator Scott Pruitt announced this week that the agency would revise the requirements for model years 2022 to 2025 to something the agency determines is more appropriate, arguing that the Obama administration “set the standards too high.” That would weaken one of the central efforts by former President Barack Obama to reduce the catastrophic impact from a warming planet. Another key rule, aimed at the electricity sector, was one of the Trump administration’s first targets.

The EPA’s latest decision gives the auto industry what it pressed hard to get. Within three weeks of Donald Trump’s inauguration, executives from 18 automakers—many of which had agreed to the standards in 2012— urged him to reopen the matter.

The Alliance of Automobile Manufacturers even submitted a regulatory filing that questions the science behind global warming, its consequences, and the long-established connection between air pollution and health.

Even as companies such as Toyota, Ford and General Motors repeatedly profess their commitment to fighting climate change, their trade associations have aggressively lobbied to weaken the fuel-economy standards set in 2012. The largest of those groups, the Alliance of Automobile Manufacturers, even submitted a regulatory filing that questions the science behind global warming, its consequences, and the long-established connection between air pollution and health.

Pruitt said the Obama-era EPA made unrealistic assumptions. But Oge, who headed the agency’s Office of Transportation and Air Quality for 18 years, said the process relied on information the automakers themselves provided. Pruitt’s statement Monday about his decision, which heavily cites industry groups, is based “not on facts and data but on rhetoric and politics,” she said.

“Today companies are hiding behind trade associations,” Oge said, noting that such groups were explicitly excluded from the original discussion to make it more constructive. The trade associations, she said, “represent the lowest common denominator”—the members with the weakest environmental standards.

Asked for comment, Toyota and Fiat Chrysler referred the Center for Public Integrity to their respective trade groups.

GM spokeswoman Laura Toole said by email, “Regardless of the standards, we remain committed to improving fuel economy, reducing emissions and an all-electric future.”

The automobile industry has a long history of opposition to stricter environmental and safety standards. When Joan Claybrook issued the first fuel-economy rules in 1977 as the head of the National Highway Traffic Safety Administration, or NHTSA, she said she faced strong resistance from the auto industry. Like Pruitt, she, too, received industry requests for revision, but she declined. Since then, fuel economy standards have improved in fits and starts because of industry lobbying, she said.

“It took 20 years to get airbags,” said Claybrook, who after her agency stint rejoined Ralph Nader’s Public Citizen, a consumer advocacy group, and is now retired. “They have repeatedly opposed all safety standards issued by NHTSA.”

“It took 20 years to get airbags. They have repeatedly opposed all safety standards issued by NHTSA.”

The transportation industry contributes 27 percent of climate-warming emissions in the U.S., just shy of the top-emitting sector, electric power. With better fuel efficiency, vehicles use less gasoline per mile and produce lower emissions. The EPA had projected that the rules, paired with earlier fuel-economy improvements during the Obama administration, would reduce greenhouse-gas emissions by about 6 billion metric tons over the lifetimes of all the vehicles affected by the regulations.

Shortly before Trump took office, the EPA finished a lengthy midterm review of the fuel-economy standards and concluded that auto manufacturers could still meet them in a cost-effective way. Carmakers disagreed. Four days after his inauguration, Trump met with chief executives of Ford, GM and Fiat Chrysler at the White House, promising to roll back regulations. In March 2017, he told the EPA to reconsider the matter.

The agency received more than 290,000 comments when it asked for public input in August of last year. The Alliance of Automobile Manufacturers, which spent $8.1 million on total lobbying efforts last year, argued that the assumptions on which the standards were based, including gas prices, technology advances and cost, had drastically shifted since 2012. That would make “compliance with the more aggressive later year standards very challenging,” the group said in its comment. Its members include Ford, GM and most of the manufacturers in the U.S. market.

The Association of Global Automakers, which represents foreign companies and spent $3.5 million on its total U.S. lobbying last year, echoed those concerns. It said that there is “a misalignment between the increasing stringency of the standards and the decreasing consumer demand for fuel efficiency” and that “revised findings would support the conclusion that adjustments to the regulations are needed.” Both groups insisted the standards would cost consumers money they were unwilling to pay.

Part of the reason the groups say the rule’s requirements are unrealistic is that Americans are buying bigger, gas-guzzling vehicles. Sport-utility vehicles and light trucks rose from 47 percent of total U.S. sales in 2011 to about 60 percent last year, according to an International Energy Agency report in March. It’s a shift that automakers have helped influence, analysts say, because big vehicles are more profitable.

Despite that trend, the California Air Resources Board, a state regulatory agency, said its own analysis showed that the standards are in fact more achievable and cost-effective than the EPA projected in 2012. The Consumer Federation of America, an advocacy group, said that even accounting for higher upfront costs, Americans would save $4,500 over the life of each vehicle if those standards remained in place. Last year, the federation said that 79 percent of Americans it surveyed supported major fuel-economy improvements.

Dave Cooke, a senior vehicles analyst with the Union of Concerned Scientists, said auto manufacturers are being hypocritical. He offered Ford as an example.

“Publicly, Ford is telling its shareholders they are investing heavily in electrification because it is the future of the industry,” Cooke wrote in an email. “Behind closed doors, they are trying to weaken efficiency standards in part by saying no one wants these same vehicles.”

Ford insisted it had not asked the EPA for a rollback.

“We will continue to work with EPA, NHTSA and California on one national standard with additional flexibility to help us provide more affordable options for our customers,” spokesman John Cangany wrote in an email.

For Oge, a chief architect of the 2012 rules, the revision was particularly upsetting. She counts the fuel-economy rule as one of the most important policies she worked on in her 32 years at the EPA.

“There is an urgency with climate change,” said Oge, now a fellow with ClimateWorks Foundation. “We cannot wait another day.”