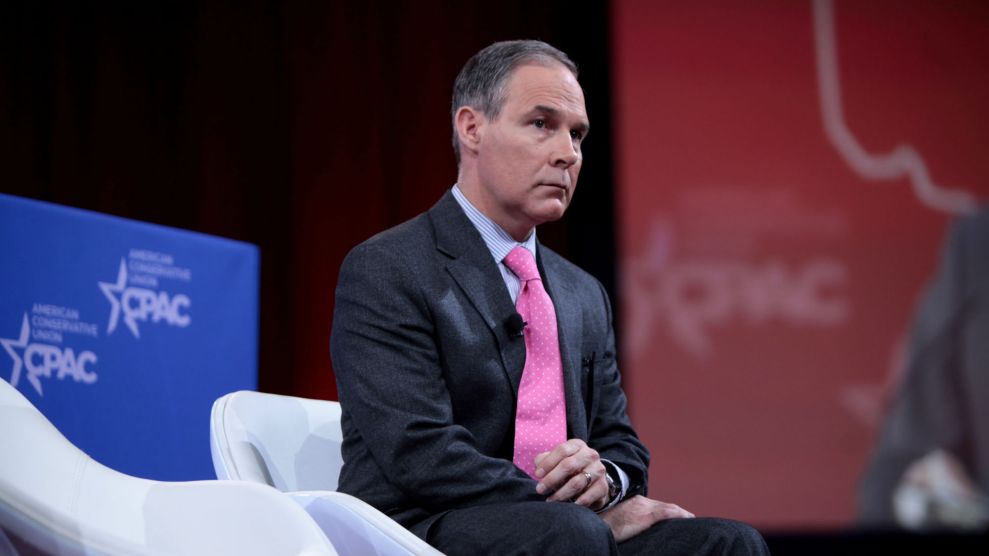 EPA chief Scott Pruitt’s ethics problems keep piling up. In a legal opinion released Monday, the Government Accountability Office concluded that Pruitt’s decision to spend $43,238 on a soundproof privacy booth for phone calls in his office violated federal law. The booth’s cost far exceeded the $5,000 legal limit for how much a presidential appointee can spend “to furnish, redecorate, purchase furniture for, or make improvements” to his or her office. Pruitt’s office did not notify Congress about the excessive spending, the GAO contends, in violation of the Financial Services and General Government Appropriations Act.

The GAO—which is the federal government’s independent watchdog—also found that the EPA allocated the funds in a way that violated a second federal law, the Antideficiency Act.

Pruitt had the booth built, according to the GAO, at the request of his security team so that he had a place to make and take “classified” phone calls and other calls to “discuss sensitive information.” Previous EPA chiefs did not use a secured phone booth in their office to run the agency.

Pruitt’s EPA has argued that the booth should not be considered an office redecoration or renovation and thus should not be subject to the $5,000 limit. The GAO’s report rejects that contention. The author of the opinion, GAO General Counsel Thomas Armstrong, does not say whether the $43,000 booth was the best way to provide a secure phone line for Pruitt. “EPA’s failure to make the necessary notification is the only subject of this opinion,” he writes. The GAO does not have enforcement power, which means Congress or another federal agency must take action if there are to be any legal consequences for the EPA’s violations.

Pruitt has faced growing criticism and angry questioning from Democratic and Republican lawmakers over his spending habits. Last week, a group of House and Senate Democrats published a detailed list of allegations suggesting mismanagement and lavish spending by Pruitt and his office. According to Kevin Chmielewski, a senior EPA official who served as Pruitt’s deputy chief of staff until he was put on unpaid administrative leave earlier this year, Pruitt apparently used his director of scheduling as his personal real estate agent, considered spending $100,000 a month on a private jet rental service, and told his staff to “find me something to do” in particular cities and countries that he wanted to visit for reasons apparently unrelated to his work at EPA.

Republicans also criticized Pruitt after the latest round of ethical violations. On Sunday, Rep. Trey Gowdy (R-S.C.) ripped into Pruitt for citing security concerns as a reason he needed to fly first class. “I’d be shocked if that many people knew who Scott Pruitt was,” Gowdy said on Fox News Sunday. “The notion that I’ve got to fly first class because I don’t want people to be mean to me—you need to go into another line of work if you don’t want people to be mean to you. Like maybe a monk.”