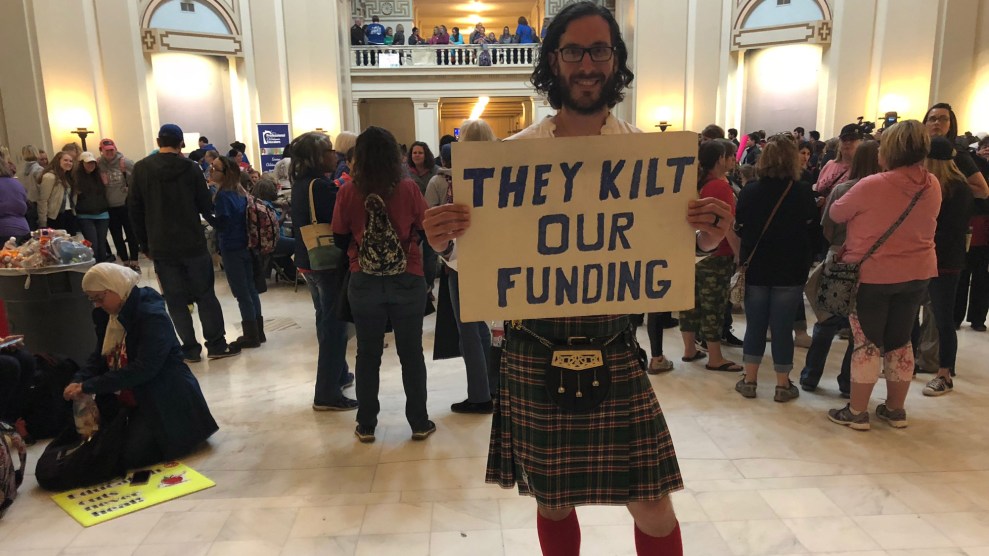 In 1990, when he was nine years old, Heath Miller protested alongside his parents at the Oklahoma Capitol building. His mother was a special education teacher in the state, and his father worked for the Oklahoma Education Association, the statewide teachers union. Thousands of teachers like the Millers were asking for smaller class sizes, more money for classrooms, and better salaries.

“When you’re a kid, you don’t really realize what you’re doing,” Miller tells Mother Jones. “I remember thinking, ‘Here are all these teachers and they are doing this because it’s important to them that schools have money.'”

Now it’s coming full circle for Miller. As the 36-year-old band director at Memorial High School in Tulsa, Miller and his peers are now pushing that same message from when he was a kid, the last time Oklahoma teachers shut down schools to demand for better pay and more funding. In many ways, little has changed.

In 1990, it took four days of pressure from Oklahoma teachers to force the state legislature to approve $230 million in school funding. This time around, the fourth consecutive day of the shutdown—Thursday—came and went with no resolution, as hundreds of schools in at least 65 school districts across the state remain closed. As the state Senate and House adjourned yesterday without passing funding measures to possibly end the stalemate, it became clear that this month’s walkout would mark one of the longest periods in state history that teachers have shuttered schools in protest.

Heath Miller, Tulsa music teacher: “My classroom is not even the worst.” #oklahomateacherwalkout pic.twitter.com/Vs0dDsmO2f

A music teacher for the past eight years, Miller stood out among the swarms Thursday—donning a kilt that extended below his knees and an unbuttoned white shirt with a black fanny pack resting on his belt, holding a sign: “They kilt our funding.”

The school spending cuts in recent years, he says, have been felt inside his own classroom and throughout Memorial High School. Foreign language courses have been eliminated at times, and one of his classes is left without enough textbooks to keep up with the large class size. “You try keeping 47 teenagers focused on a music history class. It’s impossible,” Miller says, adding: “I barely have enough chairs for 47 kids. I have ceiling tiles falling off. Half my lights in my classroom don’t even work anymore, and we don’t have enough custodial staff to pay to get them on a ladder to replace those lightbulbs.”

Heath Miller, a music teacher in Tulsa, reflects on what funding cuts have meant for his school #OklahomaTeachersWalkout pic.twitter.com/QfS17IqYQh

When Gov. Mary Fallin approved a raise for teachers last week, Miller appreciated the sentiment but questioned how much his salary would actually rise as a result. The raise would provide an average boost of $6,100 for teachers per year, depending on the teacher’s experience. “I would rather have had every penny of that sent into the classroom,” Miller says. “Don’t get me wrong, I want a raise just as much as everyone does.” But he preferred funding to help the students: “I’m not asking for a brand new high school. I’m just asking for lights.”

Adequate funding for a school like Memorial High is all the more important as more than 90 percent of its students qualify for free and reduced lunch. Many of Miller’s students, he says, “can’t afford instruments so they are using school instruments, which we don’t have nearly enough of.”

Even still, he refuses to leave Oklahoma, as many other teachers have decamped to neighboring states. “I could make 20 grand more moving to Arkansas. But Oklahoma’s home,” he says. “You don’t leave your home just because it needs work. You do what you’ve got to do to fix the place.”

“I knew with no doubt in my mind I was going to come to this walkout if it happened,” he says.