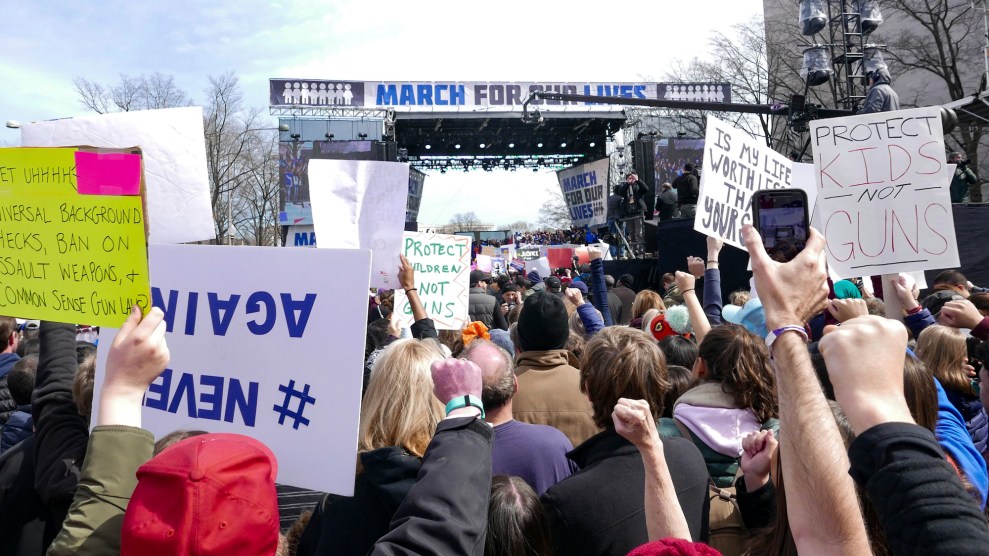 The March for Our Lives Rally in Washington, DCCheriss May/Sipa via AP

On a Saturday in early April, 200 people gathered at the public library in Sterling, Virginia, cramming into a meeting room that might have comfortably fit about half that number. As attendees made their way to their seats—or, for many, their standing spots—they were greeted by volunteers from a group called Gays Against Guns, who had dressed up in drag as Rep. Barbara Comstock, the area’s Republican member of Congress. They handed out fact sheets lambasting the congresswoman’s gun-friendly voting record as they mockingly asked passersby to reelect her. They shouted, “Smile and say ‘NRA’!” whenever people stopped to take their picture.

The event’s organizers would have preferred to have the real Comstock, too. After the nationwide March for Our Lives protests, Comstock, like every other member of Congress, had been asked by activists to host a Town Hall for Our Lives to discuss gun violence with her constituents. But, like every other GOP lawmaker, Comstock—who has an A-rating from the National Rifle Association and is one of the country’s top beneficiaries of NRA campaign funding—was a no-show. Instead, all six of of the Democrats vying to run against her were there. They quickly turned the event into an ad-hoc candidate forum on gun control that illustrated just how central the issue will be to the 2018 campaign.

The race in Virginia’s 10th congressional district—a mix of rural areas and affluent DC suburbs—has drawn national attention as one of the most competitive contests in the country. The district is home to exactly the sort of highly educated voters who rebelled against Donald Trump in 2016 and who, experts say, could help make gun control a defining issue this time around. Comstock, a reliable supporter of Trump’s agenda, is widely seen as vulnerable in a district that chose both Hillary Clinton and Democratic Gov. Ralph Northam by double digits. In a state where most voters say they support stricter firearms laws, such as banning assault weapons and high-capacity magazines, Comstock’s pro-gun stance presents an appealing target for Democrats who support even the most modest gun control measures.

But the Parkland Effect isn’t just causing causing headaches for the gun-friendly Comstock. It’s also fueling an unexpected competition in the Democratic primary, with candidates battling to position themselves as the strongest supporter of gun regulations.

The new dynamics have proven to be especially complicated for Jennifer Wexton, a Democratic state senator from Leesburg who is the presumed frontrunner in the race to take on Comstock. The Democratic Congressional Campaign Committee and EMILY’s List, which raises money for pro-choice women Democrats, recruited Wexton into the race, and last month she received an endorsement from Northam, who ran on a pro-gun-control platform and embraced his F-rating from the NRA.

On the campaign trail, Wexton has proudly touted her own NRA F-rating. But when Dan Helmer, an Army veteran and first-time office-seeker, rose to give his opening statement at the Town Hall for Our Lives, he took a swipe at Wexton’s record on this issue. Wexton, he reminded the audience, had voted in favor of a controversial 2016 state law that recognizes the validity of concealed-carry permits issued in other states. Wexton’s other Democratic opponents have also hammered her on the matter. At a candidate forum on April 10, former Obama administration adviser Lindsey Davis Stover called Wexton’s vote “reckless and a use of bad judgment,” according to the Washington Post.

Wexton certainly isn’t a champion of gun rights. Unlike Conor Lamb—the pro-gun Democrat who recently won a special election in a Pennsylvania congressional district Donald Trump carried by 20 points—she supports a federal ban on assault weapons. She’s been certified as a “Gun Sense Candidate” by Moms Demand Action, the influential grassroots gun safety group. She has voted in favor of establishing universal background checks and banning bump stocks. And her concealed-carry reciprocity vote—the one being criticized by Helmer and Stover—was actually part of a bipartisan deal that also instituted voluntary background checks at gun shows and disarmed domestic abusers. Though gun control advocates objected to the compromise, Wexton was one of many Democrats who supported it.

But as the only elected official running in the Democratic primary, some of Wexton’s votes have left her vulnerable to criticism from the left. In addition to supporting concealed-carry reciprocity in 2016, Wexton has voted for 10 other bills that eased some concealed-carry permit restrictions, most of which former Virginia Gov. Terry McAuliffe (D) signed into law. She also voted to allow domestic abuse victims carry concealed weapons before receiving a permit and to allow guns in an unlocked car glove boxes, though McAuliffe ended up vetoing those measures.

In response to the criticisms, Wexton has reminded voters about the necessities of political compromise—an argument that at least some activists seem to find compelling. “What happened between Dan Helmer and Jennifer Wexton did not sway me at all,” said Patty Kuntz, a volunteer with the district’s Indivisible chapter who moderated the April 10 Democratic forum. “She worked to get a very important bill passed.”

Grabbing onto the gun issue is a relatively new move for Virginia Democrats, says Kyle Kondik, the director of communications at the University of Virginia’s Center for Politics. “In general, the gun control issue has become more salient,” he says. “If you’re looking for a way to distinguish yourself against a more prominent opponent, turning to the left on guns is a place to go. We’ve seen that in other parts of the country, and we’re seeing it in this Virginia race, too.” Indeed, a similar dynamic has played out in the Democratic contest for an open House seat in New Jersey, where frontrunner Jeff Van Drew, a Democratic state senator with a favorable NRA rating, has avoided weighing in on upcoming gun legislation as his competitors attack his record on the issue.

Beyond the criticisms of Wexton, Democrats in the race have emphasized their own commitment to gun control. Helmer, Stover, and Alison Friedman, an anti-human-trafficking expert who worked for the State Department, have all touted their own “Gun Sense Candidate” designations from Moms Demand Action. Stover pinned hers to her campaign’s Twitter feed, and she reminded Town Hall for Our Lives attendees that she’s the only candidate who has also been endorsed by the Pride Fund to End Gun Violence, an LGBTQ political organization founded after the 2016 shooting at Pulse nightclub in Orlando, Florida. And while all the candidates have taken great pains to explain to voters that their proposals won’t undermine the Second Amendment right to bear arms, they each support the bulk of the Parkland survivors’ gun control agenda, including universal background checks and a ban on assault weapons and high-capacity magazines.

For her part, Comstock is working hard to avoid the issue. Unlike a number of other GOP lawmakers, who politely declined the Town Hall for Our Lives invitation, her office didn’t reply at all. In the wake of the Parkland massacre, Comstock simply offered condolences to the families and voiced support for increased funding for law enforcement officers who work in schools. Her campaign website affirms her commitment to the Second Amendment says nothing about stricter gun laws. Her campaign did not respond to a request for comment.