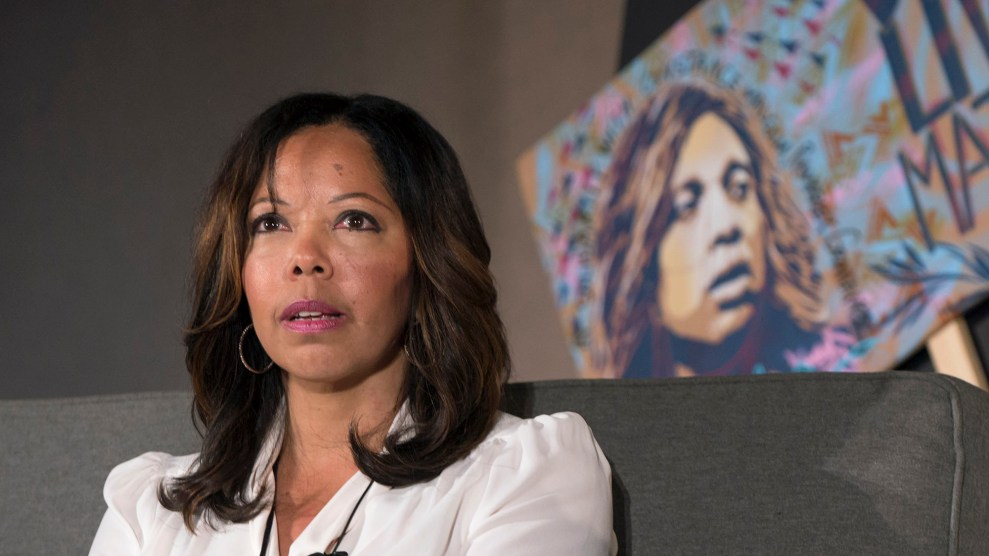 Lucy McBath participates on day one of the inaugural Politicon, a non-partisan, Comic-Con style event for politics and entertainment, in 2015 in Los Angeles.Brian Cahn/ZUMA

Let our journalists help you make sense of the noise: Subscribe to the Mother Jones Daily newsletter and get a recap of news that matters.
When Lucy McBath first decided to jump from activism into electoral politics, she couldn’t have anticipated how relevant her message would be less than one year later.
Best known as the mother of Jordan Davis, the 17-year-old black teen who was gunned down by a white man after an argument over the teen’s music in 2012, McBath is one of the highest-profile gun control advocates in the country, having testified before Congress and several state legislatures and served as a prominent surrogate for Hillary Clinton during the 2016 presidential campaign. She’s part of an influential group called “Mothers of the Movement,” made up of black women who have lost children to police and vigilante violence.
She made headlines late last year when she announced a run for the Georgia Statehouse. At the time, she said Georgians were ready to hear her message on gun safety, despite the conventional wisdom. Among a wave of other first-time candidates, several who had been personally affected by gun violence, McBath, as I wrote earlier this year, was a “high-profile test case” for the gun control message in a conservative and gun-carrying yet demographically evolving district.
But that was before Parkland.
In the weeks following the massacre that killed 17 in Florida, McBath has made a huge leap, dropping her bid for Georgia politics to vie for a seat in Congress—a move, she says, that’s been directly inspired by the Parkland, Florida, teens, who she believes have pushed the conversation of gun violence further than it’s ever gotten in recent memory. “The students are the whole demographic of individuals we’ve needed to stand up and to act on their own behalf, not just for themselves but for all gun violence victims,” McBath said in an interview last week with Mother Jones.
She’s now aiming to replace Republican Rep. Karen Handel in Georgia’s 6th Congressional District, a seat Handel only narrowly won over upshot Democrat Jon Ossoff in a high-profile special election in 2017. It’s already a crowded primary—while Ossoff is not running again, two other first-time candidates, Kevin Abel and Bobby Kaple, are competing with McBath for the Democratic nomination, but McBath is banking on her national name recognition and reputation as a unifying voice on gun control at a moment when the movement is red hot.
Part of the reason McBath felt comfortable jumping races is because she believes there’s been a “cultural shift” on gun violence, as she told the Atlanta Journal-Constitution in early March, and that shift hasn’t only happened in circles on the left. Shortly after the Parkland massacre, Georgia-based Delta Air Lines announced that it would no longer offer discounts to National Rifle Association members, which in turn prompted the state Legislature to pass a tax bill that stripped the company—the state’s largest private sector employer—of a multimillion-dollar tax break. The move earned widespread condemnation in parts of Georgia and nationally. (In a strange convergence of histories, McBath worked as a flight attendant at Delta for 30 years.) McBath and her advisers also thought, “Why stop at the Statehouse?”
“There have been so many horrific shooting tragedies since Donald Trump was elected, including the worst mass shooting in our nation’s history,” Shannon Watts, co-founder of Moms Demand Action, who has worked with McBath since 2012, said in reference to the Las Vegas massacre. There’s been, she adds, “a lot of police shootings of unarmed black men, and the culmination of all that was Parkland. This issue was becoming such a big part of the national conversation and it made her realize that she could get even more done.”
McBath, who had been working full time as a spokesperson for Everytown for Gun Safety and Moms Demand Action for Gun Sense in America, went to Washington, DC, last month to meet with students from Parkland ahead of the massive March for Our Lives in the nation’s capital. While the Parkland students have been widely praised for their outspoken activism, some observers have pointed out the parallel ways in which black students advocating for similar issues have been demonized. “The people who sought to inspire meaningful change and spark conversation were called disruptive and communists and even castigated as terrorists,” Michael Harriot, wrote at the Root. Yet McBath occupies a unique position in the middle of these two groups and, in many ways, has been crucial to bridging the gap. Her son’s death has come to symbolize the violence that plagues young black men. As I previously wrote:

McBath has been critical in getting the gun control movement to look beyond mass shootings and high-profile white victims and take seriously the concerns of the black communities most affected by everyday gun violence. And she’s become particularly important in helping reach white evangelical constituencies traditionally hostile to gun control.

So now, watching the national conversation about gun violence take off has shown her that it’s possible to have a broad conversation about gun violence that takes into account how it impacts communities differently based on race and class. “[The Parkland students] understood that gun violence comes in many shapes and forms and that even in their own privilege as white suburban students they understood the impact that gun violence has in communities of color,” she says. She described meeting the students as “amazing,” and added, “The reason why I decided I have to stand up is because I really believe I have to support what they’re doing [because] it matters.”
McBath isn’t the only one riding this moment. She represents the tidal wave of change that Democrats hope will sweep the nation during this fall’s midterm elections. They hope not only to rebuke Trumpism, but to use the energy of the moment to chip away at the fossilized ideologies that helped it grow. One part of this are the newly politicized marchers who are issuing loud and persistent threats to NRA-backed lawmakers like Marco Rubio. But it’s not just about voting people out of office—it’s also about getting them into office, or at least using their candidacies to move the needle on wedge issues like gun safety. McBath has spent years trying to put gun policy into effect; now she wants to shape it.
McBath faces an uphill battle. Her two Democratic opponents in the primary have each spent months fundraising and courting high-profile endorsements. The pro-gun lobby is also used to getting its way; it has pumped more than $2 million into the offices of Georgia’s current congressional delegation, according to an analysis by the Atlanta Journal Constitution. Moreover, McBath is the only black woman in the race, while Georgia’s 6th Congressional District is more than 70 percent white. She will be challenged to either make her gun safety message more broadly appealing to them, or speak beyond just guns alone.
For Watts, McBath’s progression seems especially logical. Their organization successfully trained nine candidates who won last year, and this year their former volunteers are running for offices in statehouse races across Arizona, Iowa, and Montana. “When you’ve spent so many days and weeks during the legislative session talking to your elected officials, you realize that they’re not any smarter than you are,” Watts says.
“My goal is to win [the election],” McBath says, “but the overreaching goal is to make sure that we are forcing our legislatures to do right by the people. I want to be part of that process [and] I know that my voice will have a great deal of impact because this is what I do.”