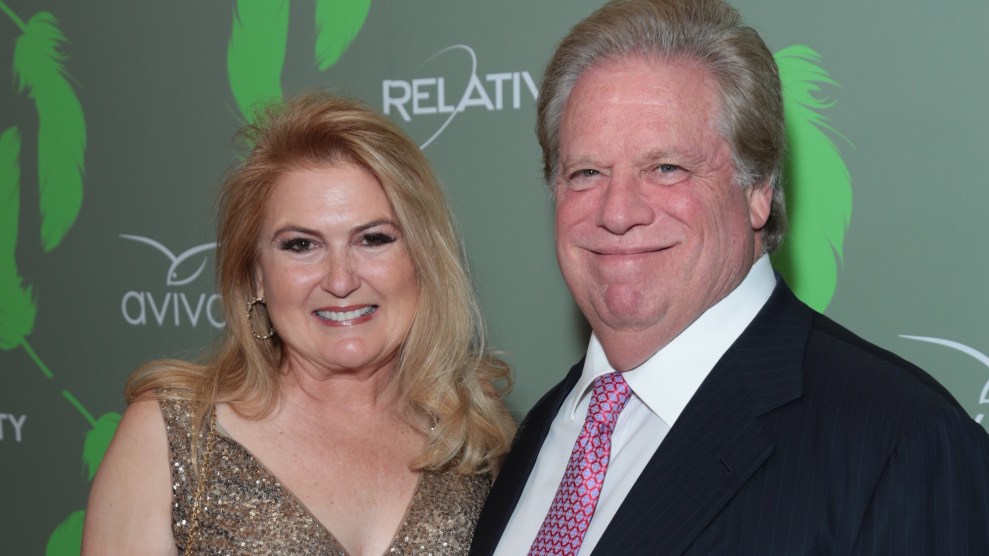 Elliott Broidy, a prominent Republican fundraiser, resigned Friday from his position as a deputy finance chair of the Republican National Committee in the wake of a report that Michael Cohen, President Trump’s personal lawyer, arranged for Broidy to pay $1.6 million to a former Playboy model who claimed that Broidy impregnated her last year.

A source confirmed to Mother Jones that Broidy, a money manager and owner of a defense contracting firm who was a major financial backer of Trump’s campaign, called RNC Chairwoman Ronna Romney McDaniel to resign the fundraising post shortly after the Wall Street Journal reported Broidy’s payments to the woman.

“I acknowledge I had a consensual relationship with a Playboy Playmate,” Broidy, who is married, said in the Friday statement. “At the end of our relationship, this woman shared with me that she was pregnant. She alone decided that she did not want to continue with the pregnancy and I offered to help her financially during this difficult period.”

Cohen received $250,000—about 15 percent of the value of the woman’s payment—for his role arranging the deal.

Both Cohen and Broidy have served since last April as RNC vice chairs. Another top Trump fundraiser, casino owner Steve Wynn, stepped down as RNC finance chairman in January after news that he had been accused of sexual harassing employees at his properties over decades. The committee has not returned Wynn’s donations. There is no indication Cohen plans to leave his post with the committee. McDaniel sidestepped a question about Cohen’s status with the RNC during an appearance Friday on CNN. “I’m gonna take a look,” she said. “I haven’t had a chance to do my due diligence.”

Cohen’s brokering of the Broidy deal emerged after his office in New York was raided last week by FBI agents reportedly seeking evidence of bank fraud and other crimes. The FBI was apparently interested in Cohen’s role in arranging payments to at least two women who say they had sexual relationships with Trump. Cohen has acknowledged that he paid $130,000 to Stormy Daniels, a pornographic actress whose real name is Stephanie Clifford, just before election day in 2016 in exchange for her silence on a sexual relationship she says she had with Trump in 2006. Cohen has claimed Trump, who denies the affair, was not aware of the payment and did not reimburse him. Daniels has sued Cohen and Trump, claiming the contract is invalid.

The contract with Daniels closely resembles the one Cohen set up with Broidy. It uses the same pseudonyms for Broidy and the woman who says she was impregnated, David Dennison and Peggy Peterson, that he used for Trump and Daniels, the Journal reported. Cohen received $250,000—about 15 percent of the value of the woman’s payment—for his role arranging the deal for Broidy, CNBC reported Friday.

Friday’s report is the latest in a string of damaging stories about Broidy, who has faced reports alleging he peddled influence with President Donald Trump and top administration officials to win lucrative contracts in countries including Angola, Romania, and the United Arab Emirates, for his defense firm, Circinus. The New York Times has described him using his access to Trump to push for policy moves, including the firing of Secretary of State Rex Tillerson, that were backed by leaders in the United Arab Emirates, where Broidy has lucrative defense contracts. Much of this reporting has been based on copies of Broidy’s emails, which he says were stolen starting in December in a hack he has blamed on the government of Qatar and its U.S. lobbyists.

The woman claims Broidy had paid her to engage in an exclusive sexual relationship to last one to two years.

Prior to Friday’s report, sources close to Broidy argued that he retained access to Trump and would remain in his RNC position. Just last month, Broidy hosted a Los Angeles fundraiser for Trump. He also traveled in March to Trump’s Mar-a-Lago resort in Florida, where he is a member, to confer with senior administration officials, two sources said. It was not clear if Broidy met with the president during that trip.

The woman who accepted the payment claims that before she became pregnant, Broidy had paid her to engage in an exclusive sexual relationship to last one to two years, the Journal reported. After the woman became pregnant, she retained Keith Davidson, a lawyer who also represented Stormy Daniels when she agreed to accept the hush payment from Cohen. Broidy claims that Cohen learned about the matter from Davidson then contacted Broidy, who agreed to hire Cohen to negotiate a deal. Broidy was told the woman had an abortion, a source said.

Broidy apologized to his family in his statement. “It is unfortunate that this personal matter between two consenting adults is the subject of national discussion just because of Michael Cohen’s involvement,” he said.