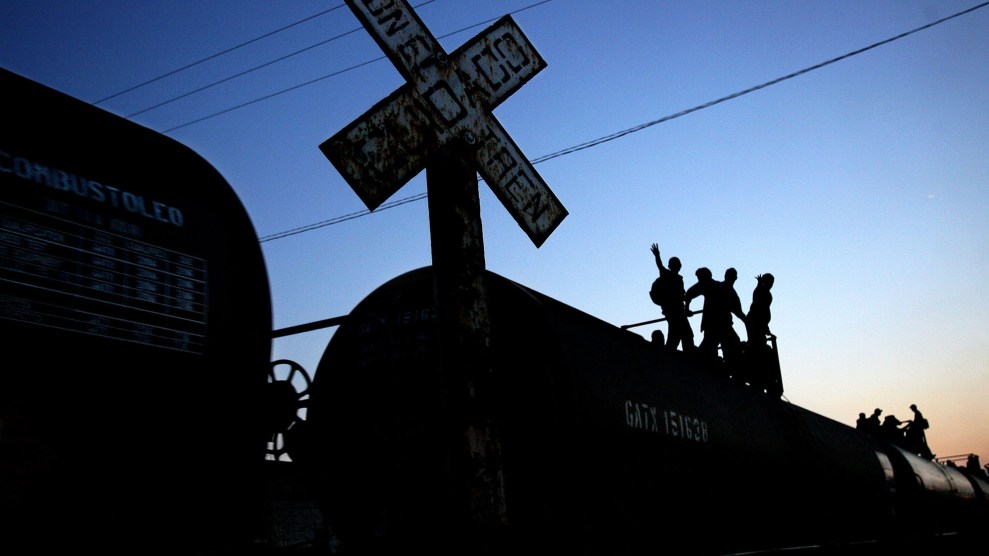 Hundreds of Central American migrants have organized and banded together on a journey to the US border, and right-wing media and President Donald Trump are reacting with outrage, even describing the caravan as an “act of war” against America.

“INVASION: Army of Illegal Migrants Is Marching Its Way Through Mexico to U.S. Border,” reads a Friday headline on the Gateway Pundit. The piece describes the group as a “horde” of “invading migrants” who are “organized into groups and sub-groups like an army.”

The migrants—roughly 80 percent Honduran—are walking through 90-degree heat from south to north through Mexico, according to Adolfo Flores, a reporter documenting the journey for BuzzFeed News. He notes that yes, the group has organized into groups of 10-15 people, and there are committees to organize security, food, and logistics, but it’s “meant to help the migrants empower themselves.”

My first dispatch while on the trail with hundreds of Central Americans who have boldly crossed immigration check points, military bases, & police in a desperate, sometimes chaotic march toward the US https://t.co/cf2rnzbp3n

The march, part political theater and part exodus, was organized by Pueblos Sin Fronteras, (“People Without Borders”), a migrant advocacy and support organization. It replicates, in a large-scale version, the journey tens of thousands of people from all over Central America and Mexico have made over the years trying to get to the US while fleeing conditions back in their home countries. Making the journey as part of a large group not only draws attention to their cause; it’s also much safer. Traveling alone or in very small groups, they’re much more likely to be harassed and assaulted by authorities or bandits who are known to rob migrants along the journey. In 2010, 72 migrants traveling a similar route were executed by members of a drug cartel.

Now, migrants find themselves traversing a different sort of battlefield. On Sunday morning, after tweeting “HAPPY EASTER!”, Trump started tweeting about the caravan. He fumed that “Border Patrol Agents are not allowed to properly do their job at the Border because of ridiculous (Democrat) laws like Catch & Release,” and then attacked the Mexican government and the caravan:

Mexico is doing very little, if not NOTHING, at stopping people from flowing into Mexico through their Southern Border, and then into the U.S. They laugh at our dumb immigration laws. They must stop the big drug and people flows, or I will stop their cash cow, NAFTA. NEED WALL!

These big flows of people are all trying to take advantage of DACA. They want in on the act!

Flores, the Buzzfeed reporter accompanying the caravan, reports that the group will march to the US border where roughly two-thirds of the participants will either seek asylum in the US or try to cross the border illegally. Others in the group are traveling to other parts of Mexico.

Right-wing media groups are blaming the Mexican government. The caravan is entirely unsanctioned. It was organized by Pueblos Sin Fronteras but organizers emphasized to participants that they were responsible for their own food, water, and bus tickets. “Mexico aids Easter invasion of over 1,000 illegals into US,” the conservative Washington Examiner headline from Saturday reads, and the piece goes on to slam the Mexican government for allowing the group to pass through the country “with relative ease.”

PJ Media, another conservative platform, cast the caravan in similar terms, but took it one step further. In a piece titled “New Wave of Migrants from Central America Headed to U.S.,” Rick Moran calls it “an organized attack on the American border by open borders activists, aided and abetted by Mexican authorities.” Moran speculates that the group’s intention is to force the US government to “overwhelm the system” and force the US government to release the migrants within the US.

“This is not only a direct challenge to U.S. sovereignty, it could be considered an act of war,” he writes. “These illiterate, uneducated ‘international workers’ are simply pawns being used by the Mexican government and international migrant activists.”

Karen, a mother making the journey with her children from Honduras, had a different message. “The crime rate is horrible, you can’t live there,” she told BuzzFeed News on the side of a highway near Huixtla, a town in Chiapas, Mexico’s southernmost state, referring to her home country. “There were deaths, mobs, robbed homes, adults and kids were beaten up.”

“If we all protect each other,” Rodrigo Abeja, an organizer with Pueblas Sin Fronteras, had said a few days earlier, “we’ll get through this together.”