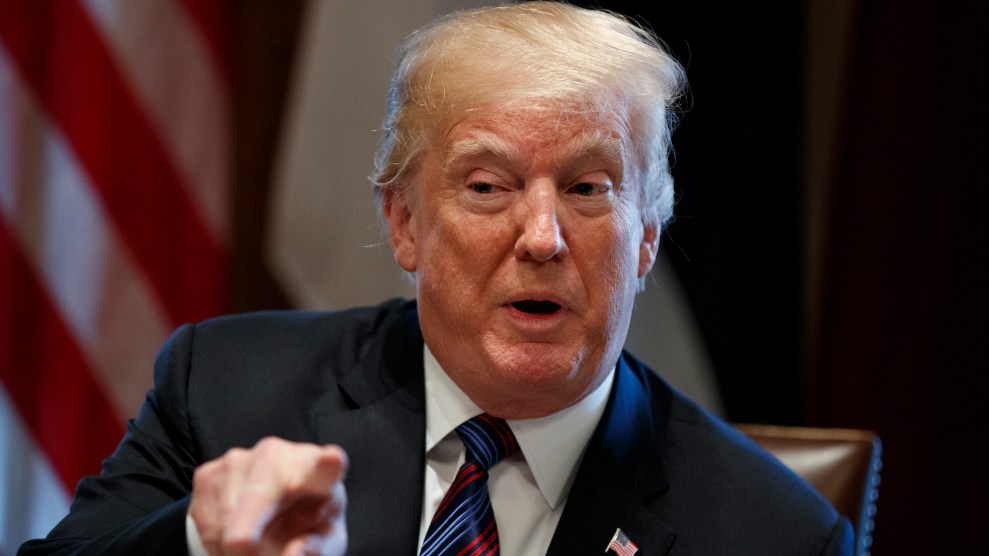 Thwarted so far in his effort to fully fund a border wall, President Donald Trump announced on Tuesday that he would send the military to help guard the border with Mexico until there is a wall and increased security. “That’s a big step,” he said at a meeting with leaders of Baltic nations. “We really haven’t done that before, or certainly not very much before.”

At a press conference later on Tuesday afternoon, Trump said he would soon meet with Defense Secretary James Mattis about the plan.

NEW: Pres. Trump: “Until we can have a wall and proper security, we’re going to be guarding our border with the military.

“That’s a big step. We really haven’t done that before.” https://t.co/BBQftSBHoO pic.twitter.com/t1R0cYZ1lf

There is no guarantee Trump will follow through with the pledge, and it is not clear what kind of military presence he has in mind. The impetus for Trump’s outburst is a “caravan” of Central Americans traveling through Mexico, some of whom hope to claim asylum in the United States. (Others plan to stay in Mexico.) Deploying the military to the border would not be an effective way to deter asylum-seekers, since they could still follow through with their plan to go to official US border crossings to apply for protections from persecution.

The migrant caravan in Oaxaca is now in its third day living at this public park. Many are kids. pic.twitter.com/Ym013rpqxI

The caravan, which is an annual event organized by the migrant assistance group Pueblos Sin Fronteras (People Without Borders) and designed to raise awareness about the dangers migrants face, became a fixation for Trump after Fox News covered it on Sunday. Over the course of a three-day tirade on Twitter, Trump has accused Mexico of “doing very little, if not NOTHING” to stop the caravan and claimed that “our country is being stolen.” Mexico’s interior department has said that it has deported about 400 members of the caravan to their countries of origin. Most of the caravan members are from Honduras.

Mexico’s immigration authority told BuzzFeed that it plans to disband the caravan by Wednesday. Alex Mensing, one of the organizers of the caravan, disputed that characterization. “Don’t be fooled, the government isn’t ‘disbanding’ it, it’s conceding its participants’ right to apply for asylum without traveling in the shadows,” he told BuzzFeed. Some of the caravan members plan to continue to head towards the US border. Most of the caravan members were in southern Mexico as of Tuesday morning, according to the Washington Post.

In the 2017 fiscal year, 303,916 people were apprehended along the US-Mexico border—the lowest level in nearly five decades and far below the 1.6 million apprehensions in 2000.* The number of people each Border Patrol agent arrests per year has dramatically declined as unauthorized border crossings have become less frequent.

In 2010, the Obama administration sent National Guardsmen to the US-Mexico border in response to concerns about drug-related violence, but Defense Department rules largely prevent the military from making arrests or seizing drugs along the border. Nick Miroff, a reporter at the Washington Post, wrote on Twitter that the guardsmen had little to do: “When I spent time with these soldiers watching the fence outside Nogales in 2011 they were hopelessly bored & desperate to leave.” Any soldiers Trump dispatches to the border are likely to encounter similar boredom.

Correction: An earlier version of this article misstated the date of the previous record-low number of people apprehended at the border.