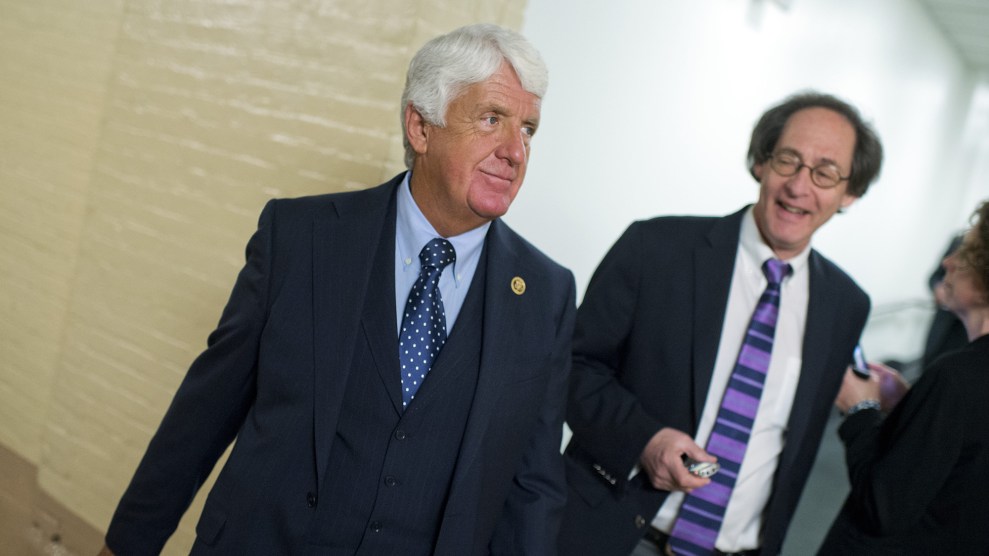 Last week, Representative Rob Bishop (R-Utah) was the guest of honor at a private dinner at the San Juan home of a prominent Puerto Rican businessman and major GOP donor. The dinner, which one lobbyist who attended initially described as a fundraiser, was attended by Jose B. Carrión III, the chairman of the financial oversight board created by Congress to help repair the debt-ridden island’s financial situation. Bishop chairs the House Natural Resources Committee, which has jurisdiction over the board and many other aspects of life in Puerto Rico.

Puerto Rico Gov. Ricardo Rosselló has called for “more transparency and more clarity” about the event, suggesting at a May 7 press conference that questions about whether Carrión’s involvement in the event presented a conflict of interest should be directed to him.

“I do not think there were conflicts of interest at the dinner,” Carrión told Mother Jones, “My political contributions are well known and of the public record. Everyone in Puerto Rico knows I am a Republican.”

The fiscal oversight board has been pushing a variety of austerity measures, aimed at freeing up money so the island can pay down its debt.

The island’s government and Bishop have increasingly been at odds over the pace of progress in addressing the island’s debt issues, and Bishop has been agitating for Carrión to take a greater role in speeding the process, and for the board he chairs to take an even more active hand in governing the island’s finances and budget.

At the heart of the matter is an unresolved debate over whether the board or the island’s own government has ultimate control. In late-March, Bishop sent the board a letter urging it to make its own deals with the hedge funds and other creditors that hold some $120 billion of Puerto Rican debt. The board’s fiscal plans, Bishop wrote, are not “advisory documents or mere suggestions to the Puerto Rican government,” pressing Carrión, the board’s president, to carry out his “statutory duty to mandate any reforms—be they fiscal or structural—on the government of Puerto Rico.”

Puerto Rico Gov. Ricardo Rosselló responded to Bishop’s letter, arguing that his government had worked in good faith with its creditors, and saying he was “dismayed” that Bishop was “demanding that the Board usurp” the government of Puerto Rico. “Despite your apparent desire to turn back the clock many decades to a time when the federal government simply imposed its will upon our Island and appointed its officials, the autonomy of the People of Puerto Rico and their duly elected Government must be respected,” Rosselló wrote. “I cannot and will not permit you to elevate concerns of bondholders on the mainland above concern for the well-being of my constituents.”

When asked on the evening of May 4 whether Bishop was attending a fundraiser on the island that night, Katie Schoettler, a spokeswoman for the House Natural Resources Committee, said “the Chairman is not attending this.” She has not responded to multiple requests for clarification about Bishop’s activities that night. Lee Lonsberry, the congressman’s personal spokesman, confirmed Bishop was in Puerto Rico, where he held a daytime press conference pushing natural gas development, also did not respond to multiple requests for more information about his schedule. Andrea Bonime-Blanc, the financial board’s contracted ethics advisor, declined to comment.

J. Lebrón Ayala, a reporter at Noticel, an Puerto Rican digital news outlet, reported on Saturday that sources had told him a fundraiser for Bishop had occurred the night before. Stephen Kupka, a Washington lobbyist for the Puerto Rican Energy and Power Authority (PREPA), reached by Mother Jones on the way to the event, initially confirmed that he was attending a fundraiser but then corrected himself. “Actually, you know what? I don’t think they’re classifying it as a fundraiser. I think it’s just a dinner.” When asked if there was money being raised, he said “No. Not that I know of.”

Bertica Cabrera, a Florida-based GOP consultant who attended the event, called it a “great night,” and confirmed that Bishop had been there. The dinner took place at the home of Juan Antonio Larrea, the president of a company that owns many restaurants and eateries on the island, including franchises of Krispy Kreme, Chili’s, and Church’s chicken. Cabrera denied any fundraising occurred at Larrea’s home. Larrea, who has given nearly $70,000 to Republican candidates and committees, did not respond to a request for comment.

The fiscal oversight board has been pushing a variety of austerity measures, aimed at freeing up money so the island can pay down its debt. On April 19, the oversight board released a fiscal plan that called for health care cuts, along with lower tax rates and business-friendly reforms, leaving the Puerto Rican government to draw up a budget within its guidelines. Rosselló accepted those aspects of the plan in a budget he submitted on May 4, but did not include money for debt service, nor did he adopt labor law reforms and pension cuts that had been outlined by the board.

While the government of Puerto Rico has sought to trim its budget by reducing university funding, closing hundreds of schools, and shipping 10 percent of its jail inmates to mainland private prisons, among other measures, such cuts are unpopular on the island. Protests against the cuts and the board were met with a violent response from the island’s police force on May 1, and a federal judge has ordered a review of the matter.

The dinner happened the same day that Bishop—whose has received more money from oil and gas interests than any other industry—told reporters at that Puerto Rico could be the “energy hub of the entire Caribbean area,” and touted increased privatization and natural gas production, according to The Intercept.