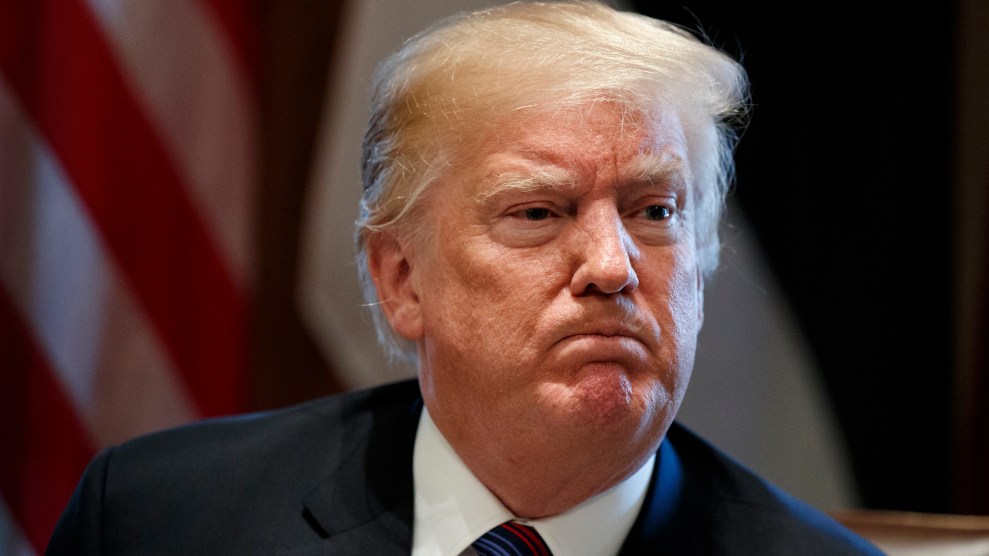 On Saturday, the New York Times reported that Donald Trump Jr. took a second, previously undisclosed meeting during the 2016 presidential election to discuss an overture from a foreign government—this time with an emissary from princes in the United Arab Emirates and Saudi Arabia.

It’s a pretty damning story, at first glance. But on Sunday President Donald Trump offered alternative read on it—it actually vindicates him, because the disclosure of the meeting meant that special counsel Robert Mueller’s investigation into Russian interference in the election had gone nowhere.

The story never actually says that, because that doesn’t make any sense. Mueller’s probe has already indicted 19 people—including 13 Russian nationals—and wrung a guilty plea from the president’s first national security adviser. His campaign manager has been indicted. And the Times story notes that Mueller was investigating this second meeting specifically to see if it, too, had been coordinated in some way with the Russians.

As is often the case, Trump opted to deflect from the contents of the story by calling for his political critics to be investigated instead:

….At what point does this soon to be $20,000,000 Witch Hunt, composed of 13 Angry and Heavily Conflicted Democrats and two people who have worked for Obama for 8 years, STOP! They have found no Collussion with Russia, No Obstruction, but they aren’t looking at the corruption…

…in the Hillary Clinton Campaign where she deleted 33,000 Emails, got $145,000,000 while Secretary of State, paid McCabes wife $700,000 (and got off the FBI hook along with Terry M) and so much more. Republicans and real Americans should start getting tough on this Scam.

Now that the Witch Hunt has given up on Russia and is looking at the rest of the World, they should easily be able to take it into the Mid-Term Elections where they can put some hurt on the Republican Party. Don’t worry about Dems FISA Abuse, missing Emails or Fraudulent Dossier!

What ever happened to the Server, at the center of so much Corruption, that the Democratic National Committee REFUSED to hand over to the hard charging (except in the case of Democrats) FBI? They broke into homes & offices early in the morning, but were afraid to take the Server?

….and why hasn’t the Podesta brother been charged and arrested, like others, after being forced to close down his very large and successful firm? Is it because he is a VERY well connected Democrat working in the Swamp of Washington, D.C.?

Things are really getting ridiculous. The Failing and Crooked (but not as Crooked as Hillary Clinton) @nytimes has done a long & boring story indicating that the World’s most expensive Witch Hunt has found nothing on Russia & me so now they are looking at the rest of the World!