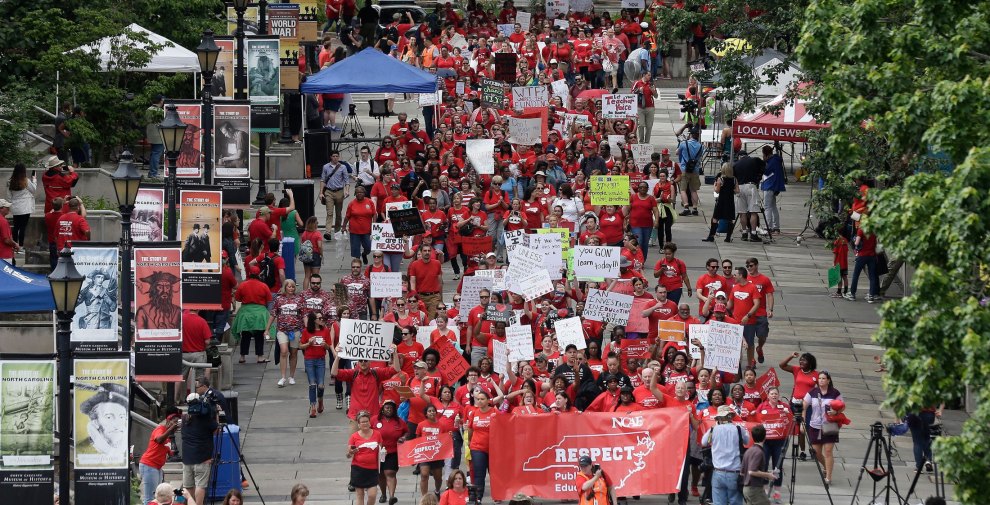 Participants make their way towards the Legislative Building during a teachers rally at the General Assembly on Wednesday.Gerry Broome/AP

On Wednesday, as North Carolina lawmakers returned to their legislative session, thousands of teachers protested outside the statehouse in Raleigh for a one-day “Rally for Respect,” calling for more money for schools and higher teacher pay and echoing the demonstrations at other statehouses rocked by years of post-recession cuts to school funding.

Since the start of the year, Democrats in North Carolina, fueled by Democrat Roy Cooper’s narrow victory over Pat McCroy in the governor’s race and wins elsewhere, have grown optimistic that they can retake the state legislature, and organizers see Wednesday’s protest as the opening salvo in that fight. Recent protests in states like Oklahoma and Arizona have put Republican lawmakers on the defensive as teachers and their supporters have castigated legislators for passing tax cuts and slashing education funding.

“If they are not supporting public education, then we are not returning them to the General Assembly,” says Mark Jewell, president of the North Carolina Association of Educators. “Public education is the economy in North Carolina. So regardless of the party affiliation, what we are seeing from this movement is that citizens love their public schools. It’s the foundation of democracy, bolsters community, and creates jobs.”

SEEING RED: Thousands of teachers from across North Carolina have descended upon the streets of #Raleigh…

This is a view from @WRAL
above the crowd. Unreal!#RedforEd #ncpol #nced #WatchWBTV

Crowd estimates are coming in for the Teachers March in Raleigh, North Carolina at 20,000.

#Red4Ed Over 20,000 Educators here in Raleigh to ADVOCATE FOR OUR STUDENTS💕 I Love TEACHING!!! pic.twitter.com/1arLTFONOh

Amid the wave of teacher activism around the country, educators and union leaders have been channeling their attention to ballot initiatives and local elections. Dozens of current and former educators who protested this spring have filed to run for state office, and following the teacher walkout in Oklahoma, the president of state’s largest teacher group announced it would shift its focus toward mobilizing and supporting pro-public education candidates in the November election.

In Arizona, where the recent #RedForEd walkout led to a 20 percent teacher pay increase over three years and $400 million in additional school funding, organizers called for a November ballot initiative that would increase income taxes on wealthy state residents to bring in some $690 million in annual revenue for teacher salaries and school operations. The initiative’s organizers still need to gather more than 150,000 signatures by July 5 to get onto the ballot.

Meanwhile, in North Carolina, the frustration over reductions in school funding has been brewing since the recession, particularly once Republicans took control of the state legislature in 2011 for the first time in 140 years. Not only did Republicans redraw the state’s congressional map (later declared unconstitutional) and pass the infamous bathroom bill (later partially repealed), but they also slashed funding for school supplies and textbooks, scrapped a cap on classroom size, and eliminated pay raises for veteran teachers and those with advanced degrees. In 2013, the General Assembly created a statewide voucher program that directed public dollars to scholarships and grants to send children to private schools. “It’s put North Carolina in a public education crisis right now,” Jewell says.

As the Center on Budget and Policy Priorities points out, state lawmakers also enacted sweeping corporate and income tax cuts and eliminated the state’s estate tax in 2013. The total lost revenue from these cuts—and from another reduction in corporate and income tax rates set to go into effect next year—will grow to $3.5 billion annually, according to North Carolina’s Budget & Tax Center. Adjusted for inflation, state funding for North Carolina schools has fallen nearly 8 percent since the recession hit.

“If they are not supporting public education, then we are not returning them to the General Assembly.”

This year, the average North Carolina teacher made about $50,000, up nearly 2 percent from last year but still some $9,600 short of the national average. Since 2009, teachers’ salaries in North Carolina have dropped 9.4 percent, adjusted for inflation, according to the National Education Association. State lawmakers have already approved an average 6 percent raise for teachers next year. Gov. Roy Cooper, a Democrat, has called for an 8 percent raise, with additional raises for teachers with more than 25 years of experience.

The teachers demonstrating on Wednesday want to boost teacher pay and per-pupil funding to national levels within the next four years. They’ve also called for more school nurses, psychologists, and counselors. They want a $1.9 billion school construction bond approved to help renovate older buildings, Medicaid expansion for their students, stronger health insurance and pension protections, and an end to corporate tax cuts until school funding and pay are restored to national levels. They’ve asked that lawmakers bring back veteran pay increases as well.

Wednesday’s protest is a way to bring all of this into sharp relief for voters. All 170 General Assembly seats are up for election this fall, and just one legislator is running uncontested. The end game from the teachers’ perspective, Jewell says, is to “change the direction of public education policy” for years to come at the ballot box.

“We need to keep this energy,” he says. “This will all be fruitless if we can’t march these folks to the ballot box on November the 5th. If we don’t change the policymakers, we are going to continue to be on the stranglehold of people who want to invest in corporate boardrooms rather than public school classrooms.”