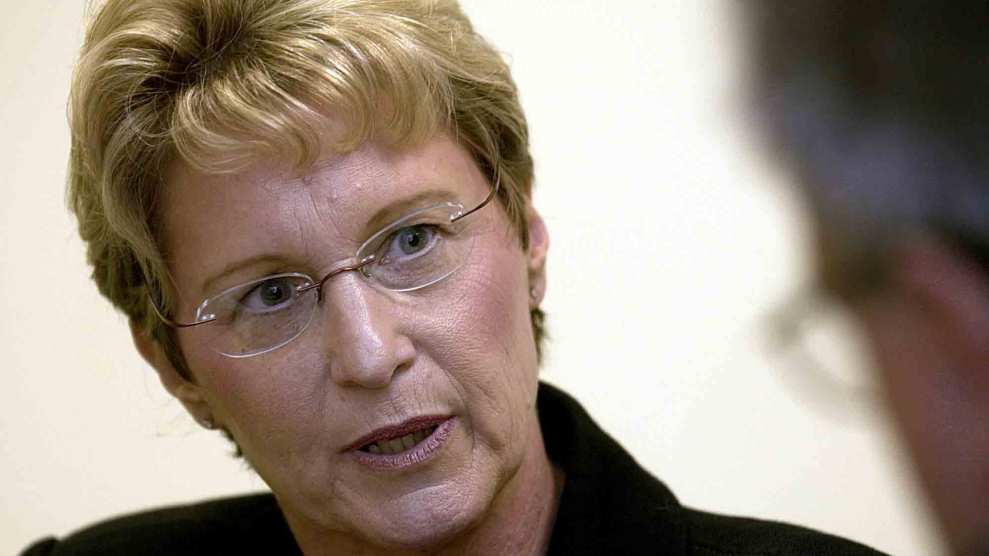 In a hagiographic video series titled “Armed and Fabulous” on the National Rifle Association website, the gun group touts Sandy Froman, a current board member and past president, noting that “her illustrious career has established her as not just part of the American gun culture but as an integral thread in the fabric of firearms history.” The video, one of several sponsored by Smith & Wesson highlighting “NRA Women,” celebrates Froman’s career as a lawyer, her hobby of making chainmaille jewelry, and her years of advocating gun ownership for women. She once declared, “I love guns—never met one I didn’t like.” The video plays up what seems to be an anomaly, quoting Froman saying, “I am often asked how a Jewish woman, a native of San Francisco, and a graduate of Stanford University and Harvard Law became president of the NRA.” But the video leaves out an intriguing piece of her past: When she was at those prestigious schools, she helped controversial Stanford University professor William Shockley, a Nobel Prize winning physicist, as he promoted his theory that blacks were genetically inferior to whites.

In late 2015, Froman, now a Tucson, Arizona-based attorney specializing in mediation, was elected to the board of directors of Sturm, Ruger & Company, one of the largest manufacturers of guns in the United States. On May 9, the company will hold its annual shareholder meeting, and some activists are calling on major investors in the firm to oppose reelecting Froman to the board due to her ties to the NRA and its fierce opposition to gun safety measures. On Tuesday night, Majority Action, a shareholders activist group, began the process of submitting a shareholder advisory with the Securities and Exchange Commission challenging Froman’s position on the board and citing “archival records” revealing “that she worked with Shockley over at least a three-year period.” The group intended to point out that the Southern Poverty Law Center has called Shockley “an ardent eugenicist whose theories of black racial inferiority eventually made him an academic pariah.”

In 1956, Shockley shared the Nobel Prize for physics with two colleagues for his role in developing the transistor at Bell Telephone Laboratories years earlier. By this stage, he had started a semiconductor company in Mountain View, California, in a move that is widely regarded as the kick-start for the establishment of Silicon Valley. Yet in the mid-1960s, while a professor at Stanford, he turned his attention from physics to eugenics and genetics. He contended that blacks were intellectually inferior to whites, and that this was due to genes. As the New York Times noted when Shockley died in 1989, “He preached a philosophy of ‘retrogressive evolution.’ Stipulating that intelligence was genetically transmitted, he deemed blacks genetically inferior to whites and unable to achieve their intellectual level.” In a 1972 response to a letter written by the president of the National Academy of Sciences (NAS) defending the group’s decision to not endorse Shockley’s research, Shockley declared that he “rebelled at sweeping…racial questions under the rug. I undertook research on existing research. This research led me inescapably to the opinion that the social and intellectual disadvantages of American Negroes arise primarily from genetic causes.” He at one point proposed a “voluntary sterilization bonus plan”: People with an IQ under 100 would be paid a cash sum if they agreed to be sterilized. (In 1980, he maintained that the “major cause for American Negroes’ intellectual and social deficits is hereditary and racially genetic in origin and thus not remediable to a major degree by improvements in environment.”)

Shockley’s view on race and genetics—he was no expert in the field—made him an outcast within the scientific community and a controversial figure nationally. According to tape recordings that are part of the Shockley archives at Stanford, Froman in the early 1970s assisted Shockley in the pursuit of his blacks-are-inferior crusade.

Froman graduated from Stanford in 1971 with an economics degree before heading to Harvard Law. Recordings of several conversations between her and Shockley captured Froman helping Shockley on that 1972 response to the NAS, referring to the extensive work she had done for Shockley, and discussing the idea of bringing Shockley to Harvard to promote his theories.

In a summer 1972 conversation, Froman assisted Shockley in organizing, editing, and circulating the NAS response. She also advised him on how best to title this report in order to draw attention to it. “If you called this something like ‘courses on dysgenics,’ I think it would catch somebody’s eye,” she said, referring to a term Shockley used to describe genetic deterioration within the black population. Shockley had wanted to teach a course on dysgenics, and Stanford had turned him down in a move that had gained media attention. Froman continued, “You’re getting publicity about the dysgenics courses, because that’s a more, you know, I don’t know, a meatier target for newsmen to grab…So I’m just not wondering if the title—in other words, somebody hears it has to do with the course, they might read this whole thing.” In September 1972, this report was published in the Congressional Record by Rep. John Rarick, a segregationist Democrat from Louisiana. The paper was eventually titled, “American Lysenkoism in the National Academy of Sciences.” Shockley was referencing a Soviet movement—named for scientist Trofim Denisovich Lysenko—that suppressed scientific inquiry in favor of unproven theories.

In a September 1973 conversation, Froman and Shockley discussed the possibility of Shockley debating his ideas on black genetic inferiority at Harvard with Roy Innis, a civil rights figure. Froman told him she would contact the head of the Harvard Law Forum to gauge his response to the idea. “It’s a good program to be in front of,” she said, “because a lot of people have heard of it.” In a follow-up conversation that month, Froman advised Shockley to present his ideas to the student and local papers if he came to Harvard. She noted that Shockley could attend a pre-debate cocktail party that would be held at an eating club, where he could share his theories with “the sons of New York attorneys and bankers and whatever.” The debate never took place at Harvard, after faculty members and the Harvard Black Students Association protested. (Shockley ended up debating an anthropologist named Ashley Montagu at Princeton.)

During these September 1973 conversations, Shockley offered to introduce Froman—who would graduate law school the following spring—to law firms where he had connections. But he noted he would have to base his recommendation on work she had done for him related to his genetics theories. “In some places,” he said, “that would probably put them off.” Froman, whose father, like Shockley, was a physicist, agreed that her association with Shockley would be a problem. “I don’t really advertise it,” she said, “but there are people at Harvard certainly, and in my class, who know that I did a lot of work for you. And in some cases, it’s made me a very unpopular person. But those are things I think that those people have to deal with.” When Shockley noted that Froman could face consequences for assisting him, Froman replied, “None of this has been without knowledge of, you know, what was happening.”

In a July 1974 discussion with Shockley and another associate, Froman indicated she was aware of Shockley’s practice of recording his conversations. “He tapes everything,” she said. During this conversation, she laughed when the associate read an article describing Shockley as spreading “racist poison.” Referring to this piece, she remarked to Shockley, “Well, they did call you a ‘scholar.'”

In an interview on Tuesday with Mother Jones, Froman said that while she was an undergraduate student at Stanford she worked as a part-time secretary for Shockley’s wife, who was his office manager, and that her duties included typing Shockley’s papers. “I didn’t really know anything about his theories,” she said. “I was just his secretary…and they gave me stuff to type. I typed it… Mostly, I typed what I was told to type.” When a Mother Jones reporter informed her of the tape recordings of her talks with Shockley and read her quotes from these conversations indicating she had done more than merely type his papers, she remarked, “I have no recollection of any of this. It’s just too long ago.” She then ended the interview, saying she had to board an airplane.

The NRA did not respond to multiple requests for comment.

In its promotional material hailing Froman as a gun rights champion, the NRA focuses on a piece of her history, citing the time she was nearly burglarized at home when she was a young woman decades earlier—an event that led her to become a fan of guns. Her long-ago connection to Shockley, though, has been left out of her story.