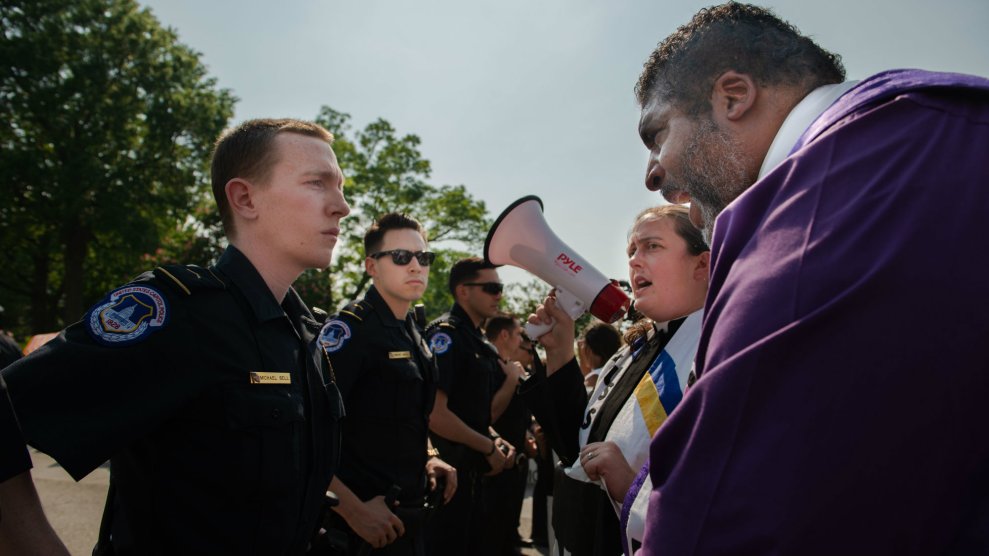 Fifty years after the first Poor People’s Campaign, organized by Martin Luther King Jr. shortly before his assassination and carried out after his death, activists have launched a new campaign for economic and social justice. Modeled after the original movement, in which thousands of people descended on the National Mall in Washington, DC, to protest poverty, the 2018 Poor People’s Campaign is expected to last six weeks in 35 states, where people plan to participate in nonviolent civil disobedience and teach-ins.

“We know that in the richest country in the world, there is no reason for children to go hungry, for the sick to be denied health care and for citizens to have their votes suppressed,” Reverend William Barber, the co-chair of the campaign, said in a statement. “Both parties have to be challenged—one for what it does and one for what it doesn’t do.” Barber is the founder of the Moral Monday movement, a coalition of faith leaders and activists who routinely protested poverty and discrimination in Raleigh, North Carolina.

The movement’s list of demands includes addressing poverty, voting rights, environmental stewardship, racism, and more. Each week protesters will focus on a different topic and hold nonviolent protests; the first week primarily focuses on children, women, and people with disabilities living in poverty. “Our research revealed that the states with the highest overall poverty rates also had the worst voter suppression and the highest number of women and children in need,” Liz Theoharis, the campaign’s co-chair, said in a March interview with AlterNet.

The movement kicked off with protests across the country Monday. In DC, Barber was arrested with fellow protesters who were impeding the flow of traffic by standing in the middle of Independence Avenue, in front of the US Capitol building.

Thousands of people joined the #PoorPeoplesCampaign in nonviolent moral fusion direct action & hundreds have been arrested across the country standing up for truth & justice. Help us bail them out by donating to the legal defense fund: https://t.co/rTFLlV3PUV pic.twitter.com/sYZhwyEUd5

In Kansas City, Missouri, protesters sat down in the street to impede traffic.

HAPPENING NOW: Over a hundred Missourians have shut down the streets leading to the state capitol with the #PoorPeoplesCampaign. The people united will never be defeated. #FightFor15 pic.twitter.com/YjjA9gnCac

Protesters in Nashville, Tennessee, shut down a bridge during rush hour.

A protest by the Tennessee Poor People's campaign has shut down the Victory Memorial Bridge (James Robertson Pkwy) in downtown Nashville. pic.twitter.com/EhJqFfFT93

In total, hundreds of people were arrested across seven states and Washington. According to the Associated Press, most of the arrests were for blocking traffic. But protesters in the nation’s capital were unconcerned with being arrested. “Somebody’s hurting our people and it’s gone on far too long,” they sang while police officers ordered them to disperse. “We won’t be silent anymore!”