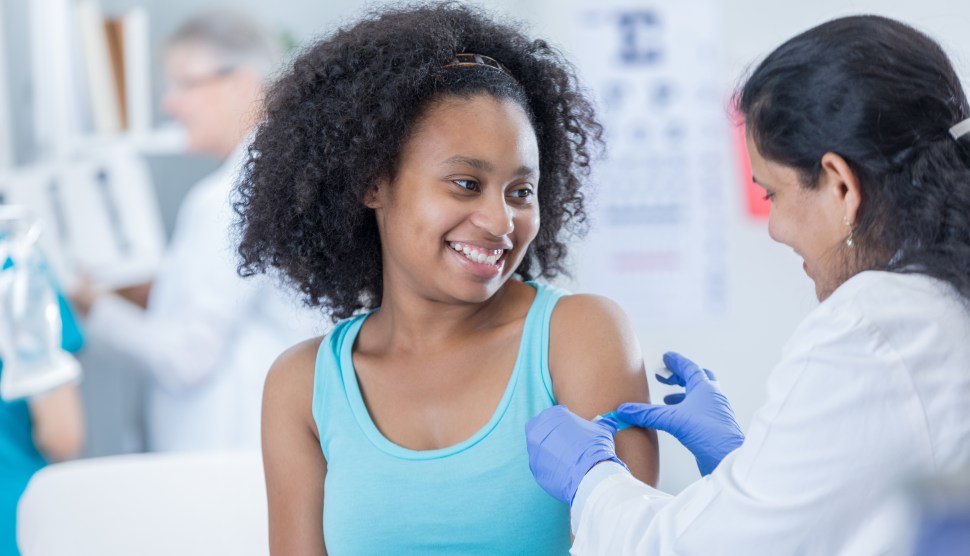 A vaccine that can prevent certain kinds of cancer has been on the market for decades—but American children’s immunization rates with it are still woefully low. The Centers for Disease Control and Prevention recommends that all children receive a series of human papillomavirus immunizations when they’re 11 or 12, yet less than half of teenagers are up to date. That’s partially because many parents are reluctant to vaccinate their children against diseases caused by sexually transmitted infections. But a small new study, published in the journal Pediatrics, finds that physicians can change parents’ minds about the vaccine—if they’re persistent.

Researchers from the University of Texas Southwestern Medical Center recorded 43 clinic visits at which children were due for their first HPV vaccine. In 37 of the visits, they observed, parents expressed reluctance to let their children get the vaccine. All of the children whose doctors acquiesced (with statements like, “maybe you’ll change your mind in the future”) left without the immunization. But when doctors used a combination of acquiescence and persistence (“If you don’t want that, it’s fine with me. But it’s for safety…”), 15 percent of patients took the vaccination. When doctors used persistence alone (“when they get them when they are younger, their immune system builds up a better response”) 94 percent of patients were vaccinated. The latter technique, the researchers found, worked even in the seven visits during which parents expressed very strong initial reluctance: All seven of those kids ended up vaccinated.

“These were really encouraging findings,” says lead researcher Jasmin Tiro, a University of Texas assistant professor of public health who specializes in behavioral science. “These parents went from hesitant to getting the vaccine in the same visit.” The findings echo previous research on providers’ conversations with parents of babies and toddlers about childhood vaccines.

Tiro noted that it’s especially important that providers are able to address fears or worries a patient or parent might have about the shot. That can include addressing misinformation: Earlier this month, for example, the journal Nature retracted a study claiming to show that the HPV vaccine caused neurological damage in mice.

One of the main challenges with the HPV vaccine is that it’s a series of two or three shots, so even if a parent agrees to the first one, there’s no guarantee the child will be back for another. A separate new study, published in the American Journal of Public Health last week, found that completion rates are declining, especially among girls: In 2006, only 38 percent of girls finished the vaccine series, compared with 67 percent in 2014. The study only tracked boys from 2011-2014, but it found a decline there, too: 33 percent of boys had the full series in 2014, versus 36 percent in 2011. Researchers believe that more girls get the shot than boys because parents believe that HPV only causes cervical cancer. (That’s false; it can also cause cancers of the mouth, throat, and penis, among others.)

The researchers identified a number of factors that seemed to influence vaccine completion rates—people who lived in the South and the West were less likely to finish the series, as were people with less robust insurance. Interestingly, they also found that the type of healthcare provider administering the shots seemed to matter as well: Girls who got the first shot from an obstetrician/gynecologist had much higher completion rates than those who got it from a mid-level provider such as a nurse practitioner. Tiro notes that the team’s findings underscore the importance of educating a clinic’s entire staff about how to have these conversations. “You need a consistent message sent by the whole clinic,” she said. “Every single person who interacts with the family needs to be on message.”