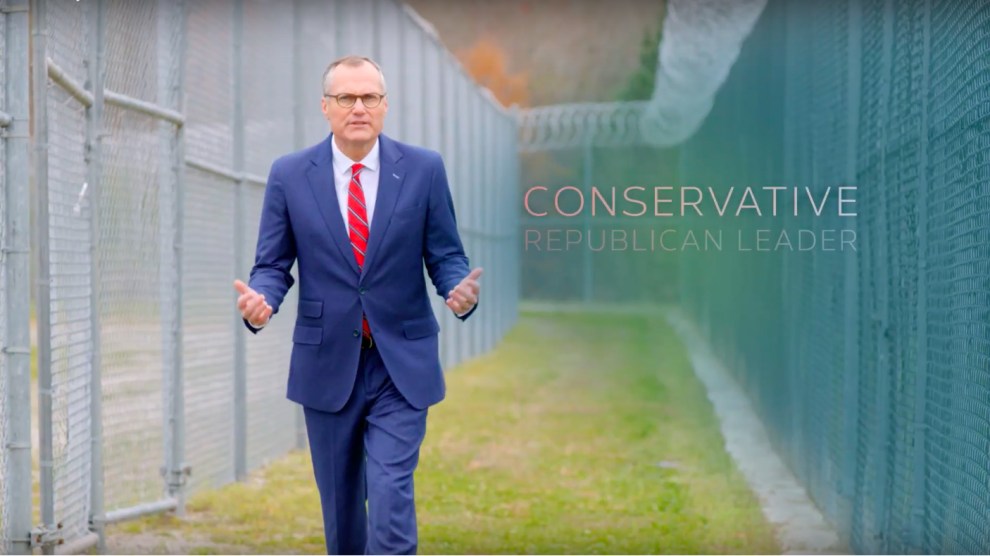 The Republican gubernatorial primary in Georgia has devolved in recent weeks into a chest-thumping argument over which candidate hates undocumented immigrants the most. In their rush to prove themselves, two candidates—both currently elected officials—have engaged in an escalating competition over who can personally “round up” and remove more immigrants from the state.

In a television ad released May 9, Brian Kemp—who serves as Georgia’s secretary of state and was formerly a state legislator—suggests he intends to personally detain and remove immigrants from the country. “I got a big truck,” he says, climbing into a pickup truck, “just in case I need to round up criminal illegals and take ’em home myself.” He then adds with a smirk: “Yep, I just said that.”

“His ad is beyond anti-immigrant, as he quite literally threatens to abduct individuals,” Stephanie Cho, executive director for Asian Americans Advancing Justice Atlanta, said in a statement. “Georgia needs a governor who…does not promote reckless vigilantism.”

On Wednesday, Williams launched a multicounty campaign tour in his “Deportation Bus.” Metal grating covers the windows of the gray bus, and the words “Fill this bus with illegals” run along its side. On the back it reads: “Danger! Murderers, rapists, kidnappers, child molesters, and others on board.” Then, “Follow me to Mexico.” Williams has taken the bus to areas with large immigrant populations, dubbing them “sanctuary cities”—even though Georgia outlawed sanctuary jurisdictions in 2009. (Sanctuary cities are jurisdictions that limit the ways in which local law enforcement can cooperate with federal immigration officials.)

“We’re not just gonna track ’em and watch ’em roam around our state,” Williams says in a video announcing his tour. Williams pats the side of the bus as rock music plays in the background. “We’re gonna put ’em on this bus and send ’em home.” YouTube briefly labeled the video as hate speech and removed it but then put it back up.

Not surprisingly, groups that advocate for minorities are appalled. “They’re encouraging people to take matters into their own hands,” Jerry Gonzalez, executive director of the Georgia Association of Latino Elected Officials, told NPR. “That’s not the way the rule of law works, particularly when it comes to immigration. I think it’s a dangerous thing that they’re doing.”

There are five candidates vying for the Republican nomination in the May 22 primary. Lt. Gov. Casey Cagle leads the pack, but might not get the majority necessary to avoid a run-off. As a result, the other four are battling for second place. Recent polling shows Kemp is running second, followed by former state Sen. Hunter Hill and former Marine and businessman Clay Tippens. Williams is struggling in last place, though many voters remain undecided.

Hill, who left the state Senate in order to run for governor, has been endorsed by conservative firebrand Sen. Ted Cruz (R-Texas). In two recent ads, Hill promises to “stop sanctuary cities.” Tippens seems to be the only one not jumping on the anti-immigrant train.

All the talk of sanctuary cities largely omits the fact that Georgia already outlawed sanctuary policies back in 2009. In 2016, the state Legislature went even further, requiring local officials to submit proof that they are cooperating with federal detention requests for undocumented immigrants in order to receive state funding.

Cagle, the front-runner, has done as much as the others to burnish his anti-immigrant credentials with fear-mongering ads. “Criminal illegal aliens are spreading across the country,” he says in one ad as images of Hispanic men with MS-13 tattoos appear on the screen. “Liberal politicians in sanctuary cities are shielding them, making it possible for them to terrorize us on our streets.” He goes on to remind voters that he “led the fight” for the 2009 law outlawing sanctuary cities in Georgia.

The Georgia candidates certainly aren’t the first Republicans to portray immigrants as dangerous gang members. (Remember the MS-13 ads in Virginia’s gubernatorial contest last year?) But a race in which candidates seem to be threatening to carry out extrajudicial kidnappings is an ominous indication of where the 2018 campaign season could be headed.