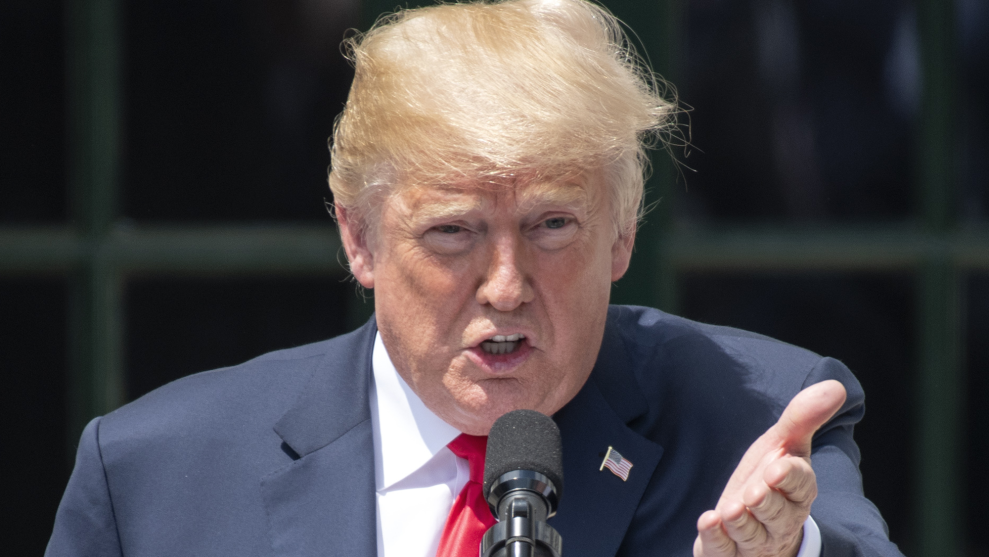 President Donald Trump’s longstanding frustrations with the ongoing Russia investigations hit a new level Sunday, when he announced over social media that he intended to order the Justice Department investigate claims that the FBI may have wrongly “infiltrated” his presidential campaign for political purposes.

I hereby demand, and will do so officially tomorrow, that the Department of Justice look into whether or not the FBI/DOJ infiltrated or surveilled the Trump Campaign for Political Purposes – and if any such demands or requests were made by people within the Obama Administration!

Despite criticism that Trump was inappropriately intervening in Justice Department affairs, the president’s reelection campaign saw the order as an opportunity for a new fundraising initiative. On Monday, they sent out an email quoting the Sunday evening tweet and inviting supporters to join in “demanding this abuse of power gets investigated.” The email was sent just as the White House confirmed that Trump was meeting with FBI director Christopher Wray, Deputy Attorney General Rod Rosenstein, and Director of National Intelligence Dan Coats Monday afternoon.

In recent days, Trump, along with Rudy Giuliani and conservative talking heads, have misrepresented reports late last week that an FBI informant may have illegally spied on the Trump campaign. In reality, the reports in the Washington Post and New York Times say something entirely different, that an informant made contact with Trump campaign advisers in order to investigate the campaign’s ties to Russia. The informant was never “embedded” in the campaign, contrary to Trump’s claims.

The presidential order on Sunday followed a slew of erratic, angry tweets over the weekend lashing out at a separate Times report revealing that a second meeting at Trump Tower took place months before the election. The Times wrote the meeting involved loyal Trump associates, including the president’s eldest son and former Blackwater head Erik Prince, and officials representing the United Arab Emirates who offered to help Trump’s campaign.

According to the Times, special counsel Robert Mueller’s investigation has been looking into the previously unreported meeting.

Somehow, Trump used the report as evidence against the special counsel. He also used it as a jumping off point to resurrect the controversy over Hillary Clinton’s email server, before eventually landing on his Sunday evening demand to order the Justice Department around.

What ever happened to the Server, at the center of so much Corruption, that the Democratic National Committee REFUSED to hand over to the hard charging (except in the case of Democrats) FBI? They broke into homes & offices early in the morning, but were afraid to take the Server?