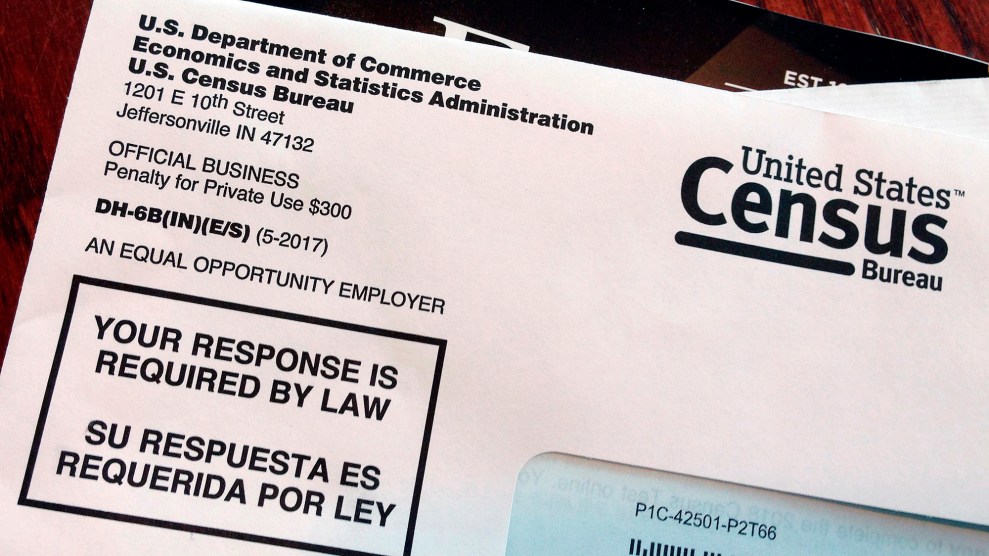 A 2018 census letter mailed to a resident in Providence, R.I., as part of the nation's test run for the 2020 census.Michelle R. Smith/AP

The American Civil Liberties Union sued the Trump administration on Wednesday over its decision to add a controversial question about US citizenship to the 2020 census. The ACLU suit is the sixth one challenging the citizenship question, which is likely to depress the response rate among immigrants and reduce the political power of the cities and states where large numbers of them live.*

“The addition of the citizenship question is a naked act of intentional discrimination directed at immigrant communities of color that is intended to punish their presence, avoid their recognition, stunt their growing political power, and deprive them and the communities in which they live of economic benefits,” states the lawsuit, which was filed with the New York Civil Liberties Union on behalf of immigrants’ rights groups.

BREAKING: We’re suing to stop the Trump administration from asking about citizenship on the 2020 census.

The question is intended to reduce participation by immigrant communities, stripping them of political and economic power.https://t.co/yYMzn8GnNn

The ACLU contends that the new question violates the Census Bureau’s constitutional mandate to count every person in America accurately, regardless of citizenship. The census determines how $675 billion in federal funding is allocated to states and localities, how many congressional seats and electoral votes states receive, and how voting districts are drawn. If many immigrants don’t respond to the census because they fear that reporting themselves as noncitizens could cause them to be deported, that would shift economic and political power to whiter and more Republican areas.

The 2010 census failed to count 1.5 million people of color while overcounting white Americans. That discrepancy could get much worse under Trump, whose administration has targeted immigrant communities and denied critical resources to the Census Bureau.

“If Republicans rig the census, there are no do-overs.” https://t.co/XxWvDyUGV7 pic.twitter.com/52A2htKXuU

The Commerce Department, which oversees the Census Bureau, approved the citizenship question in March despite opposition from six former Census Bureau directors, who told Commerce Secretary Wilbur Ross that “an untested question on citizenship status at this late point in the decennial planning process would put the accuracy of the enumeration and success of the census in all communities at grave risk.”

Gore's rational for adding a citizenship question to the census is that it will help the Civil Rights Division enforce the Voting Rights Act. But questioned by Gowdy, he can't name a single DOJ case that has been hampered by not having the question in the past.

The ACLU lawsuit follows five similar suits: one from the state of California, one from New York and 16 other states, and one each from the city of San Jose, a Democratic redistricting group led by former Attorney General Eric Holder, and the Mexican-American Legal Defense and Educational Fund.

Correction: An earlier version of this article misstated the number of earlier lawsuits filed over the citizenship question.