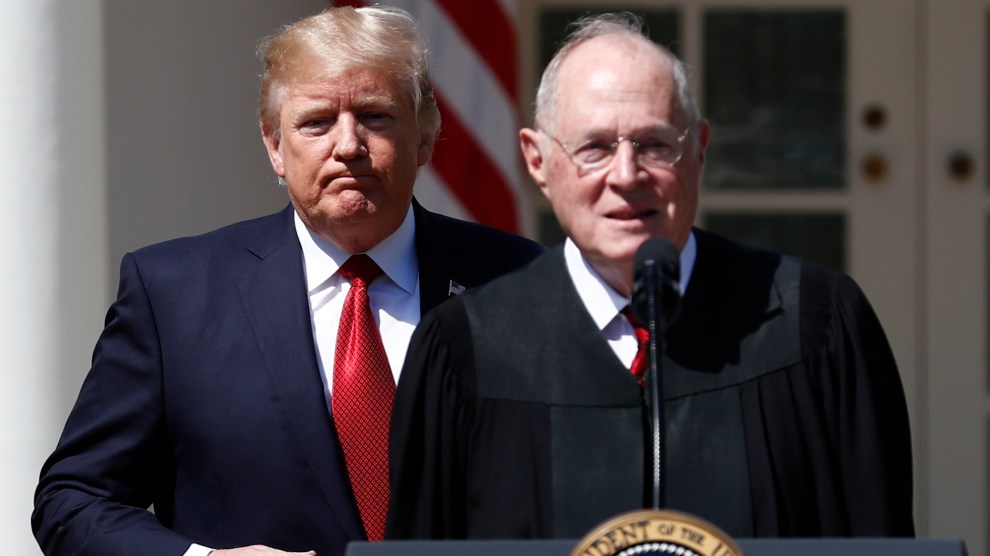 In April, the New York Times editorial board wrote an impassioned plea to Justice Anthony Kennedy, imploring him to remain on the Supreme Court. Rumors had been flying for a year that Kennedy, the court’s frequent swing vote, was going to retire, and the Times asked him, “Did you spend a lifetime honoring and upholding the Constitution and the values of civility and decency in American public life only to have your replacement chosen by Donald Trump?”

Even as the Times noted that Kennedy was an “equal-opportunity disappointer,” it urged Kennedy to think about his legacy on a few important cases where he pushed the court in the direction of civil liberties, abortion rights, and protections for LGBT people—a record that culminated in the historic Obergefell decision legalizing same-sex marriage nationwide in 2015.

But the 2017 term has put the lie to the idea that Kennedy is liberals’ best hope to save the country from the type of conservative judicial activism embraced by Trump’s first Supreme Court appointee, Neil Gorsuch. The most recent court term has seen a host of contentious, high-stakes cases that have resulted in 5-4 decisions 17 times. In all 14 of those cases that have split along ideological lines, Kennedy has sided with the court’s conservative justices. His vote on Tuesday to uphold Trump’s travel ban followed his vote a day earlier to approve racial gerrymandering in Texas, and one three weeks prior to allow a business to discriminate against LGBT customers.

In other words, for all the liberal fears that Kennedy will be replaced with someone like Gorsuch, the ideological distance between Kennedy and Gorsuch is vanishingly small.

Adam Feldman, a court-watcher who runs the blog Empirical SCOTUS, notes that Kennedy tends to shift left for some big civil liberties cases, but in close cases, he almost always votes with the conservatives. Still, the 2017 term marks the first time since at least 2005 that Kennedy has never voted with the liberals in a 5-4 decision. As recently as 2014, according to data Feldman provided Mother Jones, Kennedy voted with the liberals in 8 of the 12 5-4 cases that split along ideological lines.

The fact that Kennedy’s votes in close cases this year have been as reliably conservative as a potential Trump nominee has added to the speculation that Kennedy, 81, is throwing in the towel and retiring this year. Rick Hasen, a law professor at the University of California-Irvine, wrote in Slate Tuesday that Kennedy’s voting record this year suggests that “on the key issues of the day, the feeling from Kennedy is that he’s done…He’s returned to his conservative roots and has given up decisively bucking his own party…He’s done all that he can do to fix the problems in American society. Now it’s up to those in power, and those who put them there.”

Feldman, though, doesn’t think the swing vote totals mean Kennedy will retire. “I think Kennedy loves the speculation and will fan the flame on this to the nth degree,” he says. “For this reason I don’t think he has directly intimated much substantively on the topic. Based entirely on conjecture, I have a hard time believing he would retire when he still has the potential to make the biggest impact of the justices in his decisions.”

Feldman posits that Kennedy’s votes may be an artifact of the case selection for this year’s docket, which doesn’t have any big cases framed in the way Kennedy has favored in the past when he’s voted with the liberals in close cases. He also wonders whether the addition of Gorsuch, Kennedy’s former clerk, may have helped the court’s conservatives find better strategies for moving Kennedy into their camp in controversial cases. “Evidence of this is that he signed on with the conservatives in a majority of the 5-4 decisions this term rather than authoring these decisions,” Feldman says, noting that Kennedy has written for the majority in only two of the 17 5-4 cases so far.

One of those cases was South Dakota v. Wayfair, the case overturning the online state sales tax ban, a strange-bedfellows decision in which Justice Ruth Bader Ginsburg joined in Kennedy’s majority opinion along with Justices Clarence Thomas, Samuel Alito, and Neil Gorsuch, while Roberts dissented along with the other liberals.* The other was Jesner v. Arab Bank, a decision holding that foreign corporations could not be sued under the Alien Tort Statute, a law dating back to the 1700s that allows foreigners to bring international human rights lawsuits in US courts. The Jesner decision broke along ideological lines, with Kennedy writing for the conservative majority.

In an email to Mother Jones, Hasen counters that Kennedy has had lots of opportunities to join with the court’s liberals, notably in a series of gerrymandering cases where plaintiffs had argued that one party or the other had overreached in drawing voting boundaries to favor one political party. For nearly 15 years, Kennedy has signaled that he might be open to the right redistricting challenge in a way that liberals would favor. But Hasen says Kennedy seems indecisive, and that’s one reason why the court ended up punting on the politically charged cases. In his Slate column, he called Kennedy’s brief concurrence in the travel ban case, in which Kennedy essentially just reminded Trump to uphold the Constitution, a “mic drop.”

In the end, though, he says, “This is essentially a conservative court, and on the key issues of the day, the court’s liberals and conservatives see most things differently.” And Kennedy’s just one of those conservatives.

Correction: An earlier version of this article misstated the justices who sided with Kennedy in the Wayfair case.