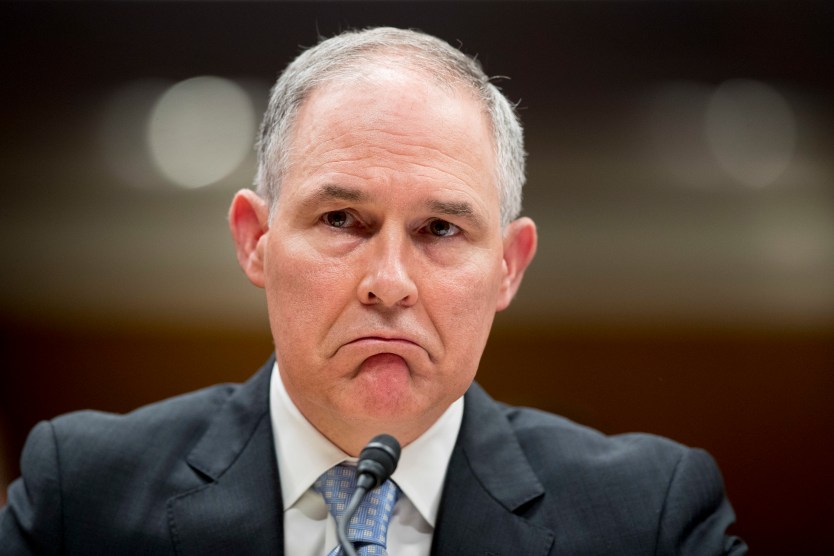 At a Senate confirmation hearing Wednesday for two nominees to serve in the Environmental Protection Agency as the heads of the Office of International and Tribal Affairs and the Office of Land and Emergency Management, it did not take long for lawmakers to dispatch with the elephant in the room.

“We are learning almost every day about a new scandal—some small, some not small—involving Administrator Pruitt,” said Sen. Tom Carper (D-Del.), ranking member of the Senate Environment and Public Works committee. “I do need to caution you both that your path to nomination will be troubled.”

Carper’s observation foreshadowed how the next hour-and-a-half of what should have been the relatively routine questioning for the two nominees largely centered on embattled EPA head Scott Pruitt, the target of at least 12 investigations into his conduct in office.

Nominees William Charles McIntosh, who President Trump tapped to head the EPA’s Office of International and Tribal Affairs, spent 19 years as an environmental compliance officer at Ford Motor Company. Peter C. Wright is an environmental lawyer who previously worked with Dow Chemical Company before he was nominated to lead the Office of Land and Emergency Management. Both repeatedly skirted around questions asking how they would react to an unethical request from their boss.

This exchange between McIntosh and Sen. Sheldon Whitehouse (D-R.I.) was typical of many that took place during the hearing. “Assume that you are in office,” Whitehouse said, “What do you think is appropriate regarding having your professional staff run personal errands for you, like lotion producing or used-hotel-mattress-seeking?” McIntosh replied, “I will follow and am committed to following all the guidance of our ethics officials and all the rules and regulations that govern us while carrying out our official duties.”

“I will follow and am committed to following all the guidance of our ethics officials and all the rules and regulations that govern us while carrying out our official duties.”

But Whitehouse continued, saying, “Will you ask your official employees to run personal errands for you?” McIntosh did not waver from his previous statement: “I will follow all the ethics rules and rules and regulations of the agency.” Whitehouse then appeared to be incredulous, “Huh? I would have thought that would have been an easier question to answer. ”

Nonetheless, the hearings also focused on the qualifications of the nominees. McIntosh previously worked as deputy director in the Michigan Department of Environmental Quality during Republican Gov. John Engler’s administration and focused on his experience in Michigan during his opening remarks.

“When I started my environmental protection career, Lake Erie would catch fire,” he said. “Portions of the regulated community were recalcitrant in their compliance and the states and tribes were just learning how to implement their environmental responsibilities.”

He expounded on a belief that states should be given primary responsibility to manage their affairs, an approach he called “cooperative federalism,” which did not require “federal redundancy in regulation.”

Democratic senators focused most of their attention on Wright, whose nomination was fiercely opposed by environmental groups. An open letter submitted to the Senate and signed by a coalition of 100 environmental groups, rips into Wright for his job at Dow Chemical Company in which he protected “the interests of a corporation with a striking record of hazardous chemical releases and toxic waste sites.” The groups declared him unfit to head an office whose responsibilities include modernizing chemical safety programs nationwide.

When asked by Sen. Cory Booker (D-N.J.) if he supported Pruitt’s decision to delay a chemical safety regulation from being implemented, Wright avoided the question. “I’m not deeply familiar with the current rule,” he replied. “I believe chemical safety is paramount, but if confirmed I [will] become more up to speed with the particular details of that proposal.”

Carper then asked a question on a topic where Pruitt, along with many members of the Trump administration, including the president, have expressed skepticism. “Do you agree that humans are the main cause of climate change?”

“I agree that humans are a cause of climate change,” Wright said.

At least one area where the nominees distanced themselves from their potential boss was on the subject of travel. Pruitt has reportedly spent over $105,000 by traveling on first-class flights.

The committee will likely approve both men, sending their nominations to the floor of the Senate. Meanwhile, Senators will not have to wait long to ask Pruitt questions themselves. After a series of appearances before a House Energy and Commerce subcommittee and House Commerce Committee on the Environment, he is set to return to Capitol Hill for an August hearing before the Senate Environment and Public Works committee hearing, Chairman John Barrasso (R-Wyo.) announced in a press release Tuesday night.