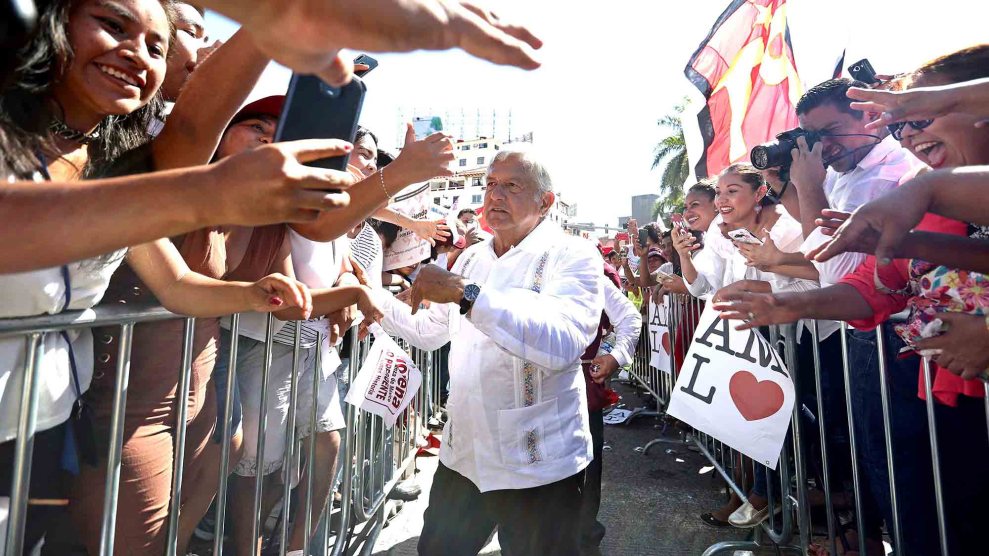 Tens of millions of Mexican voters will go to the polls Sunday to vote in more than 3,000 races—none more important than the one to choose the country’s next president. Andrés Manuel López Obrador (or AMLO, as he’s commonly called) has held a healthy lead in polling for months and is widely expected to succeed Enrique Peña Nieto, Mexico’s unpopular current president.

Obrador is the former mayor of Mexico City. He has twice before sought the presidency, without success, on a leftist nationalist or center-left platform—depending on who you ask. While he’s taken a tough line against President Donald Trump, most recently for his treatment of migrants at the border, AMLO’s popularity has more to do with his vows to purge crime and governmental corruption and use the savings to fund services for the poor. Violence is spiking in the country, as the Guardian notes. More than 120 candidates have been killed while running for office over the last 10 months. Obrador has presented himself as the only alternative to business as usual in a country where a brutal drug war has led to more than 160,000 deaths over the last decade or so.

Obrador is currently polling ahead of Ricardo Anaya, of the conservative National Action Party (PAN), and Antonio Meade, of the centrist Institutional Revolutionary Party (PRI). AMLO’s lead and likely win on Sunday will take the party he launched, Morena, to new heights in a country where the PRI has ruled for most of the last 85 years. Peña Nieto has been mired in a series of corruption scandals that have helped drag his approval ratings to about 20 percent. Anaya, the conservative PAN party candidate, has also tried to cast himself as an alternative to the current government but he has seen his own party accused of corruption and is said to have failed to connect to voters on a personal level.

Maureen Meyer directs the Mexico program for the Washington Office on Latin America (WOLA), a Washington, DC-based human rights advocacy organization. I spoke with Meyer this week about the upcoming elections and relations between the US and its neighbor to the south. She had just returned from the US-Mexico border, where she was meeting with families caught up in the Trump administration’s family separation policy.

Maureen Meyer: The election in Mexico right now is, more than anything, a reflection of rejection by the Mexican population of the past government’s policies and their failure to address insecurity, corruption, and rampant impunity. Andrés Manuel López Obrador’s win is obviously in part due to his own policies, but it’s also a really strong rebuke of current president Peña Nieto and his administration, as well as the past PAN government that also were unable to really positively impact the situation in the country.

MJ: So it’s clear that AMLO is going to win? Do you believe the polls?

MM: I think it seems more than likely that he will. The polls have continuously showed him with a 15 to 20 percent lead, which seems hard to think that that would suddenly be reversed. It also speaks to the high level of discontent in Mexico. Peña Nieto has some of the lowest approval ratings of any president on record, and Anaya as a candidate for the PAN has had a hard time distancing himself from past PAN governments that also were not effective in addressing violence and corruption.

MJ: What would AMLO’s victory mean for the people of Mexico?

MM: A lot depends on where he puts his efforts, and you certainly cannot expect any government to be able to change things dramatically overnight. Though he has campaigned heavily on wanting to address corruption in the country, what that will actually look like seems to be still to be seen, although his advisers mentioned things like asking for UN assistance in reviewing public procurement contracts.

The way that Lopez Obrador views a lot of Mexico’s problems are economic, which is important, and wanting to support Mexico’s national economy and addressing income inequality in a different way. The unknowns are on the criminal justice system and what his government will do to continue with reforms that have happened in the past, or with the moment that Mexico’s in right now where you’re undergoing a transformation of your attorney general’s office at the federal level to make it more independent from the executive, and whether that will actually move forward in the right way.

A lot of people have a lot of expectations of what he will be able to do, but also on the flip side, reservations about what that will mean in the country, how much you will be able to revert in any short period of time a lot of the challenges Mexico has on insecurity, on the infiltration of organized crime into government institutions or security forces, to addressing rampant corruption that permeates a lot of Mexican institutions and businesses.

MJ: What will AMLO’s approach to dealing with narco traffickers be?

MM: A lot of people want to see some more details. They’re not willing to take the military out of the public security tasks that they’re currently undertaking, likely because you have very few options right now, certainly underscoring the need to strengthen the federal police to take over that role.

If you’re looking at the overall drug trade, that has been different and has certainly been in discussion in Mexico is this whole idea of amnesty. I don’t think it was ever meant to be amnesty for all drug traffickers, but if you look at his advisers and what they’ve put out there, it could mean things like amnesty for the woman who has been incarcerated for 10 years for trafficking a backpack full of marijuana. Or the producers in states like Guerrero, who are mostly indigenous, who are in jail for producing poppy gum, and not the higher-level traffickers.

Overall, we are looking at a government that is recognizing that you can’t do business as usual anymore, being the strategies that Calderón and Peña Nieto implemented of primarily full-on confrontation with organized criminal groups. Also responding to the push from civil society organizations to come to terms with the violence that is happened, particularly since 2006. Two governments that have seen thousands and thousands of disappearances and executions, and a lot of answers that families need, and at a minimum, we see López Obrador’s advisers talk more and of how would you come to terms with that.

MJ: How will the Trump administration’s priorities on dealing with narco trafficking impact AMLO’s approach?

MM: Every Mexican government, when they come into office, has some time where they put a pause on US assistance to Mexico and want to understand what that dynamic looks like. I don’t think we have seen so far with the Trump administration, in terms of State Department priorities or others, a dramatic shift in how they’re engaging with Mexico on security issues. Overall, the assistance has been primarily directed at strengthening criminal justice institutions and police reform and, increasingly, working on Mexico anti-corruption systems and reforms.

We haven’t seen dramatic shifts beyond a little more focus on drug crop eradication. A new government would come in looking at where US assistance is and then assessing what they believe is in Mexico’s best interest to continue—and where they might want to step back.

Clearly, one area that is up for lots of discussion is whether Mexico will step back, or not, on immigration enforcement along its southern border. AMLO’s been wanting to propose some economic development plan that the US is also engaged in between Mexico, Central America, and the United States, to really address some of the root causes of migration. He has also been firm on addressing abuses by Mexican agencies against migrants in transit, so not the permissiveness of abuse and crimes that we’ve seen against them in recent years.

But where they will fall on immigration enforcement itself is not entirely clear.

MJ: How do you think Trump’s bellicose rhetoric on immigration issues will be met by an AMLO government?

MM: AMLO, as have all of the candidates, came out very strongly in critique of Trump and the way that Trump has spoken about Mexicans and the Mexican government, and I don’t expect that to discontinue. He’s been very clear on saying that Trump needs to treat Mexicans with respect and have a respectful relationship. I think he’s also wanting to have a cooperative relationship, not necessarily confrontational. So a lot will really depend on how both governments approach a new phase in the relationship.

Let’s remember that Peña Nieto has yet to have an official meeting with Trump since Trump took office. There’s been two meetings canceled between them because of the wall, and I won’t imagine any other Mexican president would take a different stance. They’ll probably likely take a stronger stance than Peña Nieto with his relationship to the United States, because public opinion has shifted so negatively toward Trump and his government because of their anti-Mexican policies and also because of what’s been happening at the border in terms of family separation and other areas that have received a lot of condemnation and rebuke from the Mexican population and the Mexican congress.

MJ: How do you see Trump and AMLO working together?

MM: If you look at the history of US-Mexico relations, they have had their ebbs and flows in terms of closeness. I would think that AMLO would approach Trump with the idea of wanting to have a cordial relationship and a relationship of respect and see how Trump reacts. The US-Mexico relationship is so broad, and there’s so many things that connect the countries that neither one of these administrations can afford to ignore the other. A lot will depend on how Trump responds to a new president in Mexico and how Mexican public opinion continues to respond to the United States. It is very difficult for any Mexican president to appear very cordial or cooperative with a US president who continues to have the very anti-Mexico, anti-immigrant stance that he has been taking. You can only ignore tweets for so long.

MJ: Finally, what is the most important context as people watch what happens on Sunday?

MM: Anybody that’s elected is going to be faced with enormous challenges in Mexico given the lack of institutions and the big challenges of insecurity in the country. The issue isn’t who is going to win, but what Andrés Manuel will be doing to address these broader problems. It isn’t something that is going to be solvable overnight, but you really need a big change. I wouldn’t want to be president of Mexico.