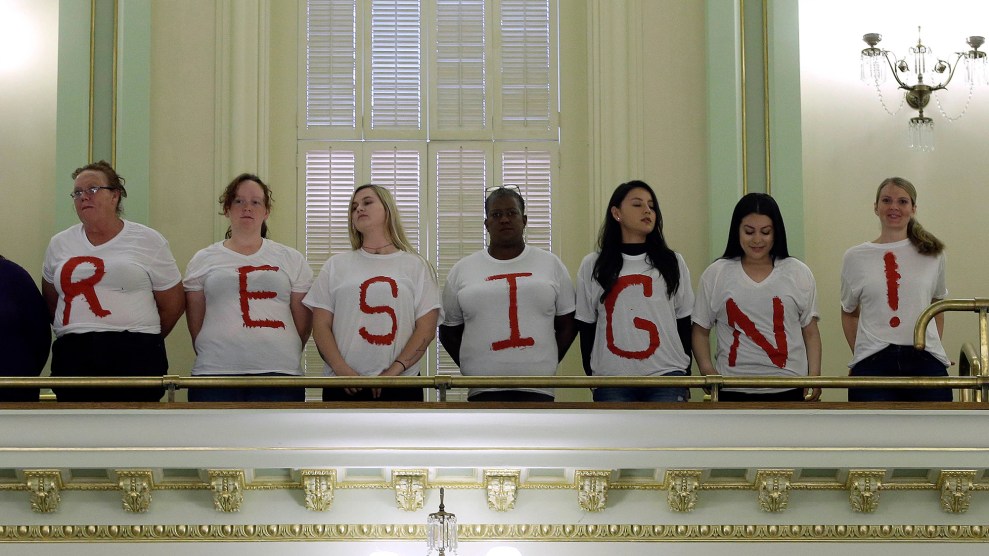 One of the biggest questions of the #MeToo era is whether voters will reject candidates who have been accused of inappropriate or illegal sexual behavior. Allegations of sexual assault—and his own boasts about it—didn’t stop President Donald Trump from getting elected. But as statehouses around the country reckon with the fallout from decades of male-dominated politics, the results from two recent races in California underscore the fact that voters’ response to these scandals remains unpredictable.

The races featured Democratic state legislators from overlapping districts in the sprawling flatlands southeast of Los Angeles. The first involved former state Sen. Tony Mendoza, who resigned in February just minutes before the Senate was to expel him after an investigation found he had “engaged in a pattern of unwelcome flirtation and sexually suggestive behavior” with several women, including a 19-year-old intern to whom he’d provided alcohol. Still, Mendoza ran again for his seat in the 32nd Senate District.

Last Tuesday, he resoundingly lost two elections—one to reclaim the seat he vacated and finish the remainder of his term and another for a new term beginning in 2019. The primary winner in both contests was a Republican candidate, Rita Topalian, who raised less than $80,000 in a race where millions were spent on behalf of nine Democratic candidates.

The second race involved Assemblywoman Cristina Garcia, who was investigated by the state Assembly for allegedly groping a male staffer’s groin and operating a boozy office complete with a “kegerator” and raunchy games of spin-the-bottle. Before that, Garcia had been one of the leading voices in the state Legislature calling to reform Sacramento’s male-dominated political culture. On Tuesday, Garcia eked out a narrow primary victory in the 58th Assembly District, besting a Republican competitor by about 700 votes.

Christine Pelosi, the chair of the California Democratic Party Women’s Caucus, says allegations like those facing Mendoza and Garcia pose a question to voters that goes beyond partisan politics. “These races really are a challenge to our conscience,” she said. “Which is to say, at what point do we say, ‘Enough—we’re not going to take this behavior; we’re not going to take one for the team’?” (Pelosi is the daughter of Rep. Nancy Pelosi of San Francisco.)

A recent review by the Associated Press determined that since the beginning of 2017, at least 25 lawmakers have either resigned or been expelled from state legislatures after their alleged victims spoke out against them. But not all have gone away quietly. After investigators concluded Arizona Republican Don Shooter had sexually harassed at least seven women, the state’s House of Representatives voted 56-3 to expel him. In May, Shooter announced he plans to run for a seat in the state Senate. In South Carolina, Democratic congressional candidate Archie Parnell lost the support of the state Democratic Party after documents were revealed detailing his abuse of an ex-wife. But that’s not stopping Parnell from remaining in the race.

In late 2017, as the #MeToo movement began forcing Hollywood to confront its toxic gender dynamics, a parallel movement emerged in Sacramento. Under the banner We Said Enough, more than 140 female legislators, lobbyists, and political staffers called for an end to the “dehumanizing behavior” of California’s boys’ club political scene. (Christine Pelosi is the group’s general counsel.) Within weeks, two Los Angeles-area state lawmakers resigned and retreated from the public sphere. A civil lawsuit was filed against Rep. Tony Cardenas (D-Calif.) accusing him of molesting a teenager several years ago. And investigations into the behavior of several more state representatives, including Mendoza and Garcia, came out over the following months.

Garcia took a three-month unpaid leave of absence beginning February while an investigative process she helped design probed the claims against her. After it failed to corroborate that she had groped a staffer in 2014, Garcia returned to the Assembly in May, though she was stripped of several committee assignments. (Her accuser has appealed the Assembly investigation’s results.) In a statement, Assembly Speaker Anthony Rendon said that although the most “egregious allegations could not be substantiated, it is clear that Assemblymember Garcia has engaged in a pattern of behavior that must be addressed.”

Mendoza chose a different path than other legislators who stepped down following damaging allegations. Instead of laying low, the day after his resignation he brazenly announced that he intended to reclaim the seat he’d just vacated. He dismissed his accusers and said he’d been unfairly targeted by a “railroad job” investigation. In an open letter, Mendoza claimed his “resignation was not about the accusations” and that he had “faith” voters would still support him.

Fewer than 15 percent of voters supported Mendoza—even as many who may have voted against him voted for Garcia. Yet Mendoza may not have been brought down by #MeToo. Campaign staffers for several candidates in the district say voters were largely unaware that he had ever resigned or been investigated, at least until a wave of campaign fliers landed in their mailboxes.

“While I support the #MeToo movement, and I’m glad for this changing light, real people are being affected as a result.”

“It was a very complicated situation to begin with,” said Vicky Santana, who ran to replace Mendoza but failed to make it to either runoff election. “The fact that someone resigned and then ran again to win back the seat that he had just left created circumstances that have never been seen before. And I think voters were confused.”

“A lot of people were unaware that the district was not being represented in Sacramento,” recalled Alexa Victoriano, who canvassed for Santana. “We would explain how [Mendoza] resigned in February, and gave them the whole background on what happened. People were very disappointed.”

For Santana, the “tragedy” of the Mendoza affair is that her district has gone without representation for months, and will continue to until a runoff election in August, three weeks before the end of California’s legislative session. “While I support the #MeToo movement, and I’m glad for this changing light, real people are being affected as a result,” she said. “It’s not just the women or [Mendoza’s] former employees that are impacted by his actions. It’s our whole district.”

As for why Garcia advanced and Mendoza didn’t, Santana points to Garcia’s longer, more pugnacious record. Before she was a state legislator, Garcia made waves as a citizen-activist exposing corruption. Voters, she said, “believed her more than they believed him because she had a stronger record than he did. I think what saved her was her record.”

Former state legislator Martha Escutia, who served 14 years in the Senate and Assembly representing the same area during the 1990s and 2000s, said voters are smarter than politicians may think. “All I will say is that the voters saw right through Mendoza’s cynical play of resigning and then running again for his old seat,” she wrote by email. “The voters spoke and booted Mendoza. And it is what it is.”