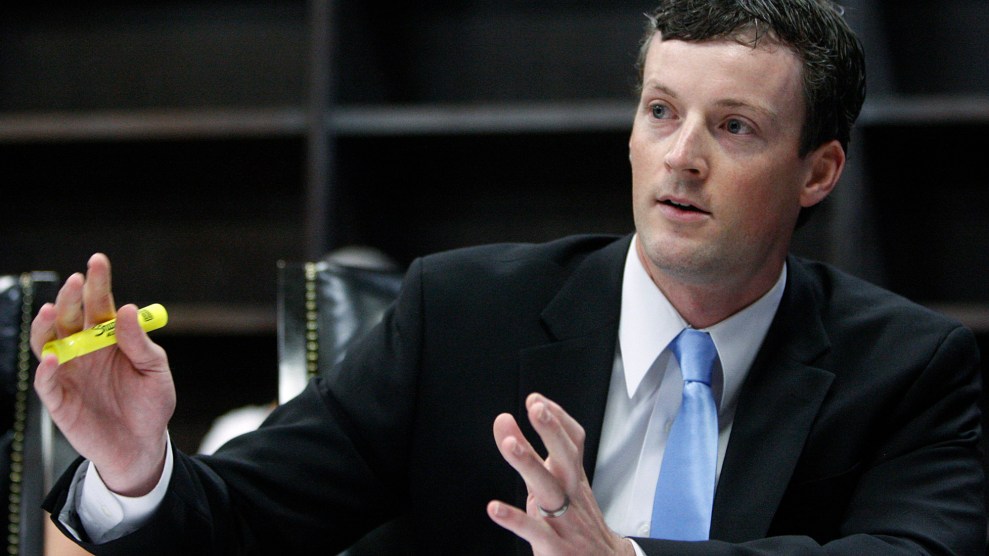 A former lackey of Environmental Protection Agency Administrator Scott Pruitt known for his role in a controversial death penalty case is about to become a federal judge. In April, President Donald Trump nominated Patrick Wyrick, currently a justice on the Oklahoma Supreme Court, to an Oklahoma district court judgeship. Wyrick, whose nomination hearing was on May 23, was grilled by the two Senate Judiciary Committee members who showed up about his relationship with his former boss Pruitt and about a sharp rebuke he received in 2015 from Supreme Court Justice Sonia Sotomayor, who accused him of misleading the court during a death penalty case. The committee is expected to vote on Wyrick’s nomination as early as this week, after which his nomination will go to the full Senate. He is expected to be confirmed.

At 37 and with little more than a year of experience on the bench, if confirmed, Wyrick would be the youngest federal judge of the 42 so far confirmed under Trump. Wyrick is also on the president’s shortlist for the Supreme Court. The court’s lifetime term means Wyrick could shape influential decisions for decades to come: If he joined the nation’s highest court today, he would be the youngest Supreme Court justice in modern history by a long shot (a few early justices were younger).

At Mother Jones, we’ve documented Trump’s propensity to nominate judges that are overwhelmingly white, male, and conservative. Unsurprisingly, Wyrick’s record is in line with the administration’s goals of rolling back reproductive rights and ending environmental protections. Here are the biggest issues that have defined Wyrick’s legal career and what his confirmation might mean for the court:

His relationship with Pruitt

Before Pruitt became a scandal-ridden EPA head hell-bent on undoing seemingly every environmental regulation enacted before Trump took office, he was a scandal-ridden Oklahoma attorney general and mentor for Wyrick, who was the state’s solicitor general until last year. During their time together, Pruitt accepted campaign donations from the oil, coal, and gas industries, all while essentially regurgitating industry protestations against EPA regulations. In 2014, the New York Times reported that a 2011 letter to the EPA from Pruitt was almost entirely written by an oil and gas company, Devon Energy Corporation, and directly addressed to Wyrick for review. The attorney general’s staff drafted the letter—copied almost word for word—onto Pruitt’s stationery and sent it to Washington. Wyrick also once held shares in Devon Energy, according to financial disclosures.

In the courtroom, Wyrick has repeatedly argued against environmental regulations, including the Clean Air Act, according to Alliance for Justice, a liberal judicial organization.

In 2015, Wyrick was on the frontlines of controversial death penalty case Glossip v. Gross, which was spearheaded by four Oklahoma death row inmates who said the state’s death penalty protocol, involving the lethal injection drug midazolam, was unconstitutional. The case was brought following a botched execution using the drug in which an inmate took over 40 minutes to die. Wyrick represented the state in the case, which eventually made it to the Supreme Court. The case’s lead petitioner was Richard Glossip, a current death row inmate in Oklahoma whose conviction has attracted considerable attention due to what his supporters say is a lack of evidence.

The Supreme Court ruled 5-4 in favor of the state, but in a scathing indictment from the bench, Justice Sonia Sotomayor criticized Wyrick’s work on the case, saying he hadn’t supported his statements with evidence: “I am substantially disturbed that in your brief you made factual statements that were not supported by the sources [you cited], and in fact directly contradicted. So nothing you say or read to me am I going to believe, frankly, until I see it with my own eyes [in] the context, okay?”

During his tenure as solicitor general, Wyrick made trying to limit reproductive rights a top priority. In one case, he defended a law which would have required minors to obtain a prescription before purchasing Plan B, the emergency contraceptive. The law would have also forced adult women to prove their age before purchasing the drug. The legislation was permanently blocked by a district judge in 2014.

In 2014, Wyrick also filed an amicus brief in the landmark Hobby Lobby Supreme Court case, which allowed closely held corporations to be exempt from regulations they object to on religious grounds—specifically, the contraceptive mandate of the Affordable Care Act. (The ACA had required all employers to cover certain contraceptives for their female employees.) In his brief, Wyrick accused the mandate of being unconstitutional, dramatically declaring, “Religious faith is more than mere belief. It is practice.”

In yet another case, Wyrick advocated for limiting the use of abortion-inducing drugs by prohibiting their off-label use, a common tactic of anti-abortion lawmakers. A district judge approved the bill after the plaintiffs requested a temporary injunction. An Oklahoma OB-GYN said the ruling would essentially end most medical abortions in the state, thus forcing women to undergo much more invasive and expensive surgical abortions. A years-long legal battle ensued, but the law was eventually declared unconstitutional by a district judge in 2017.