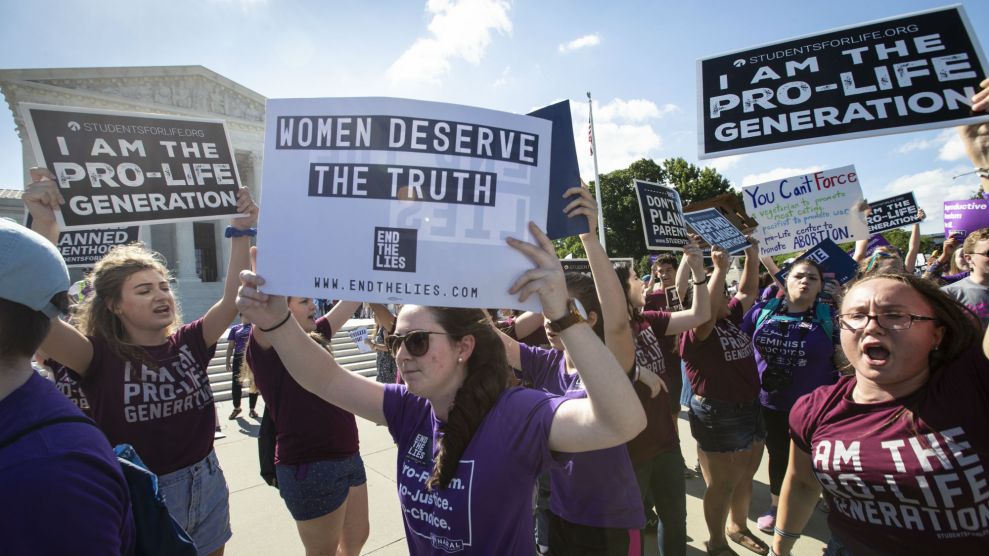 The Supreme Court issued a 5-4 ruling on Tuesday morning in National Institute of Family and Life Advocates (NIFLA) v. Becerra, a blockbuster case—and the first related to abortion since Neil Gorsuch became a justice—that could have major repercussions for the boundaries of abortion related speech.

The majority sided with a group of 110 California anti-abortion crisis pregnancy centers, blocking a 2015 state law, known as the Reproductive FACT Act, that required medical clinics to disclose if they are unlicensed, and to hang a waiting room sign about state contraception and abortion assistance programs. The centers argued they were singled out for their anti-abortion views, and that the signs violated their free speech rights. The government of California argued the law was enacted simply to ensure low-income women were informed about their reproductive health options.

The FACT Act, Justice Clarence Thomas wrote in his majority opinion, “likely violates” the First Amendment and the clinics’ right to free speech.

“Governments must not be allowed to force persons to express a message contrary to their deepest convictions,” he wrote. “Freedom of speech secures freedom of thought and belief. This law imperils those liberties.” The ruling did not fully repeal the California law, but rather reversed an earlier court’s ruling upholding the FACT Act and sent the law back to the lower courts to reconsider. This ruling, though, makes it much harder for the law to be upheld by lower courts going forward: Justice Thomas added that the crisis pregnancy centers “are likely to succeed on the merits of their claim that the FACT Act violates the First Amendment.”

Though today’s ruling is a win for anti-abortion groups, it could lay a legal foundation for future pro-choice victories. By ruling that the California law violated the free speech of crisis pregnancy centers, the court is also suggesting that abortion providers may have similar free speech rights. In recent years, more than a dozen states have passed laws requiring doctors to read patients scripts containing widely–discredited information about abortion—that it causes breast cancer, for instance, or that a pre-viable fetus will feel pain—before performing one. Those laws could be at risk to new challenges under today’s decision.

The justices wrestled with this double-edged sword during oral arguments back in March: “If a pro-life state can tell a doctor ‘You have to tell people about adoption,’ why can’t a pro-choice state tell a doctor, a facility, whatever it is, ‘You have to tell people about abortion?’” Justice Stephen Breyer asked the attorney for the centers. Justice Sonia Sotomayor echoed Breyer on this point.

In his dissent on Tuesday, joined by the three other justices that tend to side with pro-choice groups—Justices Ruth Bader Ginsburg, Sonia Sotomayor, and Elena Kagan—Breyer again made this point: “If a State can lawfully
require a doctor to tell a woman seeking an abortion about adoption services, why should it not be able, as here, to require a medical counselor to tell a woman seeking prenatal care or other reproductive healthcare about childbirth and abortion services? As the question suggests, there is no convincing reason to distinguish between information about adoption and information about abortion in this context.”

Breyer’s dissent also pointed to potentially sweeping and unintended consequences that could result from the majority’s decision, which hinges on distinctions between “professional speech” and “content-based” speech, a constitutional category subject to a higher level of legal scrutiny. Breyer argues that by defining the signs as content-based speech, the majority’s decision invites challenges to the “constitutional validity of much, perhaps most, government regulation,” putting seemingly unrelated regulations now considered professional speech—like laws requiring disclosures in securities law or consumer protection law—at legal risk.

Dozens of anti-abortion groups around the country filed amicus briefs with the Supreme Court over the last several months arguing California’s law violated the centers’ free speech rights: “Given the belief of these pro-life citizens that the unborn child is a separate human life,” wrote 41 family values organizations in a joint brief, “the state is requiring these citizens to advertise the availability of free or low-cost means of facilitating death…It is hard to imagine a more repugnant form of forced speech.”

On Tuesday, pro-choice groups called the decision damaging. They have argued that signage providing “neutral” information is necessary to safeguard against “deceptive tactics” used by some crisis pregnancy centers to mask their religious or anti-abortion orientation. “The Supreme Court eliminated a critical law that protected women from anti-abortion counseling centers’ deception,” said Fatima Goss Graves, President and CEO of the National Women’s Law Center in an emailed statement. “It is devastating that today’s decision will make access to full reproductive health care more difficult.”

Monday’s decision will shape future litigation on how far states can go to regulate the speech of medical professionals, a question on which lower courts have been inconsistent. The 3rd Circuit, for instance, has upheld a law banning gay conversion therapy, while the 4th Circuit struck down a North Carolina law requiring doctors to administer sonograms before providing abortions while describing the image to the patient. Similar laws related to crisis pregnancy centers already under challenge in Hawaii and Illinois could be overturned, while cases dealing with speech regulations imposed on abortion providers are likely to be launched.

You can read the full decision and dissent below: