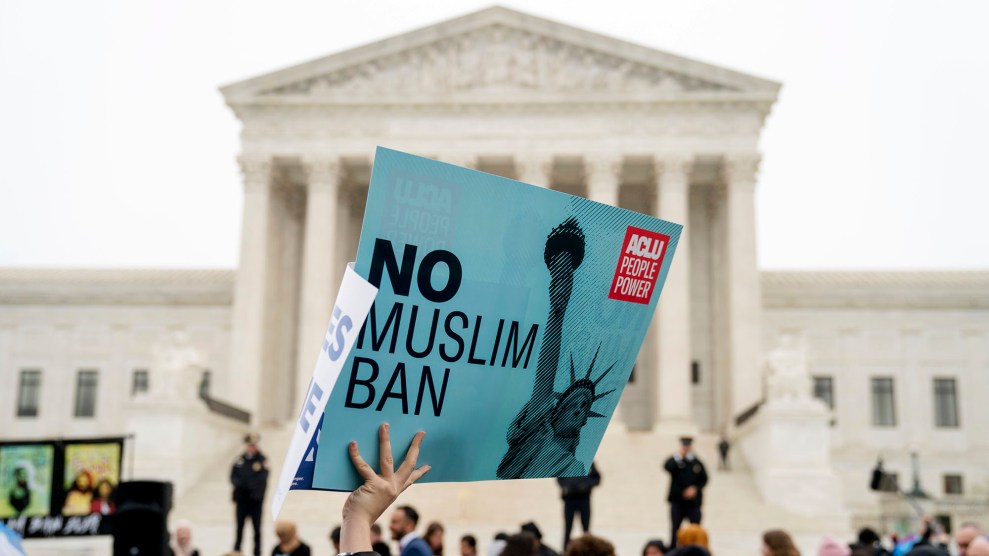 Opponents of the travel ban demonstrate outside the Supreme Court in April.Andrew Harnik/AP

When the Supreme Court justices delivered a 7-2 ruling on Monday in favor of a Colorado baker who refused to make a cake for a same-sex couple, the court may have tipped its hand in a seemingly unrelated case over the future of President Donald Trump’s travel ban.

The two blockbuster cases this term were considered separate until Monday’s opinion, when Justice Anthony Kennedy, who is expected to be the deciding vote on the travel ban case, issued an opinion that seemed to link the two cases—and to hint that he may not be sympathetic to the Trump administration’s attempt to protect the travel ban.

In Masterpiece Cakeshop v. Colorado Civil Rights Commission, the justices were presented with a free-speech case that pitted a gay couple seeking to buy a wedding cake against a baker who refused to make one for them due to his religious objection to same-sex marriage. Rather than determine whether religious artisans and businesses have a right to discriminate, Kennedy wrote a majority opinion that deftly dodged the hot-button question before the court. To defuse the issue, Kennedy and six other justices ruled in the baker’s favor by finding that the Colorado Civil Rights Commission, which adjudicated whether the baker had violated state’s anti-discrimination law, had not treated the baker fairly. The Colorado officials, Kennedy found, had violated the baker’s First Amendment right to religious freedom by not neutrally considering his religious beliefs. The proof of this unconstitutional bias was the disparaging public comments the commissioners had made about his religious beliefs.

This will sound familiar to anyone who has been following the travel ban case. Trump issued an executive order banning around 150 million people from Muslim-majority countries from entering the United States. But as in the cake case, the order wasn’t issued in isolation; it followed public comments that appeared to demonstrate a bias against a religious group. During the 2016 campaign, Trump repeatedly called for a ban on all Muslims entering the United States. As president, Trump continued to show signs of bias, at one point retweeting three anti-Muslim propaganda videos.

If the civil rights commissioners in Colorado violated the baker’s religious rights by failing to give his beliefs a fair hearing, as evidenced by their public comments, did Trump likewise discriminate against Muslims seeking to enter the country when he banned entry by members of a religion he spoke of disparagingly?

“What the court says here is that where there is a claim of religious discrimination, that you do look at the statements of lawmakers to try to get at their motivation,” says Adam Winkler, a constitutional law professor at the University of California-Los Angeles School of Law. “And that issue is a live one in the travel ban case.”

The two blockbuster cases this term were considered separate until Monday’s opinion, when Justice Anthony Kennedy seemed to link them.

In fact, it is at the heart of the travel ban case, which the Supreme Court will decide sometime this month, although the government has argued that it shouldn’t be. In April, government lawyers urged the justices to disregard Trump’s prior statements, making the case that displays of animus toward a religious minority are not enough to prove a violation of their First Amendment rights. Moreover, the government urged the justices to ignore Trump’s public comments and focus instead on the policy itself.

But in Masterpiece Cakeshop, the court took the opposite view. Kennedy quoted a 1993 opinion he had written, in which he argued that when determining the constitutionality of a government action, the court should consider “the historical background of the decision under challenge, the specific series of events leading to the enactment or official policy in question, and the legislative or administrative history, including contemporaneous statements made by members of the decisionmaking body.”*

Kennedy continued, “The official expressions of hostility to religion in some of the commissioners’ comments—comments that were not disavowed at the Commission or by the State at any point in the proceedings that led to affirmance of the order—were inconsistent with what the Free Exercise Clause requires.” In other words, if the commission had acted neutrally but reached the same conclusion, he may have ruled against the baker.

The logical extension of that argument is that even if the travel ban might have passed constitutional muster in a vacuum, Trump’s disparaging remarks about Muslims could make it unconstitutional by showing discriminatory intent.

The question of contrition also comes up in both cases. The majority in the cake case notes that the commission did not object to the disparaging comments or disavow them in their filings to the court, suggesting that contrition could have altered the court’s decision. Similarly, the attorneys challenging the travel ban acknowledged that if the president had disavowed and apologized for his previous comments, the ban would be constitutional. Yet the administration has not disavowed Trump’s past statements. (Trump did assert, five days after taking office in January 2017, that the travel ban is not a Muslim ban. But since then the president and his administration have repeatedly undermined efforts to distance themselves from Trump’s campaign statements about Muslims, including a comment by Trump’s lawyer, Rudy Giuliani, that the travel ban was a way of enacting the Muslim ban “legally.”)

The two cases are vastly different in substance, so Kennedy and the other conservative justices who signed onto the Masterpiece Cakeshop decision could certainly uphold the travel ban. But Kennedy’s finding of bias in the Colorado commission’s comments, which were not nearly as extensive or emphatic as Trump’s remarks about Muslims, suggests that he might apply the same logic to a case that will be decided within weeks of the cake one. If not, he’ll surely be accused of applying different standards to religious bias against a single Christian baker and against a much larger group of Muslims.

Correction: An earlier version of this article misattributed the quote from the 1993 ruling.