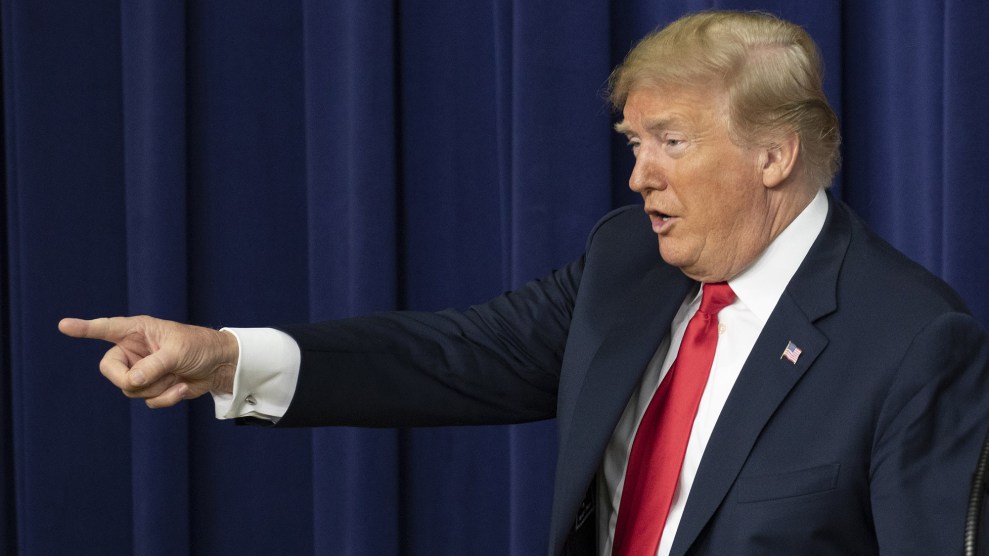 On July 24, 1974, the Supreme Court—in a unanimous decision—ordered President Richard Nixon to hand over thousands of hours of tapes to Watergate Special Prosecutor Leon Jaworski. Nixon resigned a few weeks after that. Four decades later, the Supreme Court could have a similarly important impact on the Trump-Russia investigation by ruling on any of a number of constitutional issues and legal arguments connected to the scandal. President Donald Trump has already appointed one justice to the current court. Now, with the retirement of Anthony Kennedy, the president has the chance to name another jurist who might end up ruling on a case that could determine the outcome of the Russia probe—an investigation Trump derides as a “witch hunt.”

Here are a few of the constitutional questions arising from the investigation that could land before a Trumpified Supreme Court:

1. Is the entire Mueller investigation unconstitutional?

Trump says it is. His argument is supported by a few conservative legal scholars and Trump fans who assert that Special Counsel Robert Mueller’s mandate violates the Constitution’s appointments clause by vesting too much power in an official who has not been appointed by the president or confirmed by the Senate. That theory, though, has gained little traction in mainstream legal circles. Notably, George Conway, a Republican lawyer and husband of Trump aide Kellyanne Conway, has written a thorough takedown of this argument.

The appointment of the Special Counsel is totally UNCONSTITUTIONAL! Despite that, we play the game because I, unlike the Democrats, have done nothing wrong!

2. Can the president be indicted?

Many of the constitutional arguments advanced by Trump’s backers have emerged from the legal fringes, but the question of whether a sitting president can be indicted does divide serious and established legal scholars. Former New York Mayor Rudy Giuliani, one of Trump’s lawyers, claims that prosecutors working under Mueller have privately conceded that they cannot indict a sitting president. Mueller’s office has not confirmed Giuliani’s claim, which should be treated with extreme skepticism. But if Mueller does obtain an indictment against Trump, it’s a sure bet that the issue would be on a fast track to the Supreme Court.

3. Can the president be subpoenaed?

Trump’s lawyers say no. “We don’t have to [comply with a subpoena]. He’s the president of the United States. We can assert same privilege as other presidents have,” Giuliani said on ABC’s This Week last month. In fact, President Bill Clinton agreed to testify voluntarily after he was subpoenaed by Independent Counsel Kenneth Starr. Other presidents also headed off subpoenas without challenging them directly. As a result, the Supreme Court has never ruled on whether a president can refuse to cooperate in a criminal investigation involving his own conduct. Mueller is reportedly weighing using a subpoena to compel Trump to agree to an interview. A refusal by Trump to comply could kick off a legal fight that would probably head to the Supreme Court. “If Mueller tries to subpoena us, we’re going to court,” Giuliani told ABC earlier this month.

4. Can the president pardon himself?

Trump claims he can. He recently made this controversial assertion on Twitter, and his attorneys raised the idea in a letter they sent to Mueller in January. Trump’s team may see this move as a last resort. Yet if Trump does try to pardon himself, the question would likely make its way to the court.

As has been stated by numerous legal scholars, I have the absolute right to PARDON myself, but why would I do that when I have done nothing wrong? In the meantime, the never ending Witch Hunt, led by 13 very Angry and Conflicted Democrats (& others) continues into the mid-terms!

Trump and his lawyers have repeatedly asserted that the president can act to dismiss the special counsel—and Trump has reportedly considered doing so in the past. Such a step would be politically incendiary. Sen. Lindsay Graham (R-S.C.) has said it would mark the “the beginning of the end of his presidency.” But the legal issue would turn on the manner in which the firing occurred. The order under which Mueller was appointed says that he can only be fired for cause by the attorney general. Because Attorney General Jeff Sessions has recused himself from overseeing the Russia investigation, the power to dismiss Mueller (for cause) falls to Deputy Attorney General Rod Rosenstein, who appointed Mueller. Rosenstein has made it clear he has no plans to dismiss Mueller, and in congressional testimony this week, he declared he would not follow “an improper order” from the president—a statement that seemed to include an order from Trump to fire Mueller. Any effort by Trump to circumvent Rosenstein in order to dismiss Mueller—perhaps by firing Rosenstein or by other means—would likely set off a legal fight.

6. Can the president obstruct justice?

Trump and his lawyers assert that the president cannot be charged with obstruction of justice over actions he has taken regarding federal investigations. For example, in their view, Trump’s firing of FBI director James Comey cannot be considered obstruction of justice. “The President’s actions here, by virtue of his position as the chief law enforcement officer, could neither constitutionally nor legally constitute obstruction because that would amount to him obstructing himself,” his attorneys wrote in their letter to Mueller. If Trump were indicted for obstruction of justice, the Supreme Court might have to arbitrate this matter.