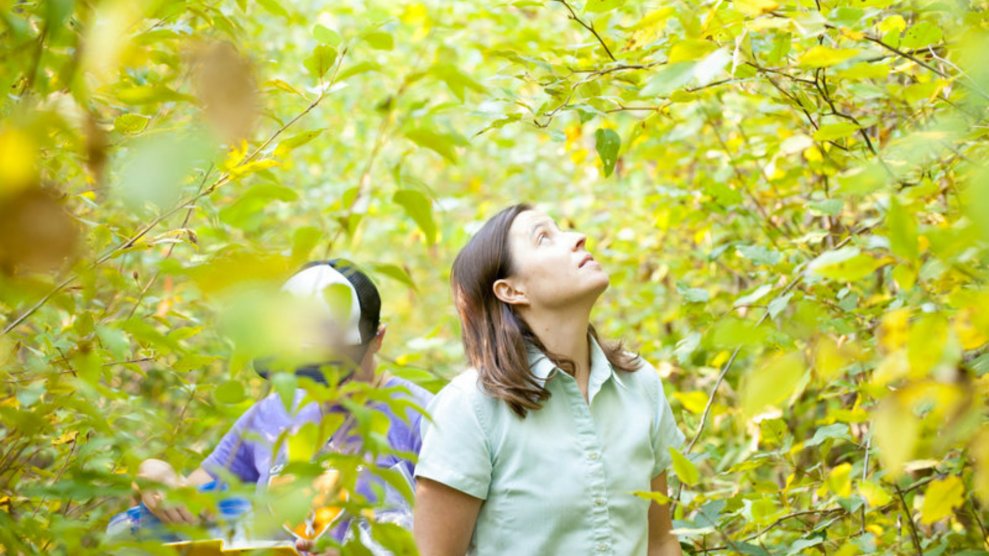 In Corvallis, Oregon, Posy Busby works in a garden planted with 3,000 black cottonwood trees that represent 1,000 unique genetic specimens, each originally found somewhere on the West Coast of North America, from California to Canada. Cottonwoods are some of the fastest-growing trees in the world, and the garden looks a lot like a timber company plantation. But Busby, an ecologist at Oregon State University, studies something on a much smaller scale than trees—the microbes that live inside their leaves.

Busby started paying attention to microbes because she wanted to understand why wild plants plagued by a disease, such as leaf rust, fall ill in one place and not another. Genetics and environment could explain only part of this puzzle. But inside a plant is a whole world of microorganisms, and some of the cottonwoods’ resident microbes seemed to have an impact on the severity of the leaf rust.

At first Busby thought of these bacteria and fungi as individuals that could be either troublesome or beneficial to the plants, like the fungus that causes leaf rust. But as she read up on the human microbiome, she realized that the microbial communities within plants were as complex as those within us. “We’re really dealing with the same thing,” she says.

Scientists have known for centuries that soil is packed with microscopic organisms and, since the late 1800s, that some plants form symbiotic relationships with fungi. But now they are finding that microorganisms live not just around but inside plants—in their roots, stems, and leaves—in greater numbers and with more diversity than anyone realized.

Busby’s cottonwood trees, for instance, were known to have a handful of microbial pathogens. “But when we looked at the overall diversity of the fungi in the leaves, it was more like a thousand or 1,500 different fungi living in and on these leaves,” across the tree’s range, she says. “So that was an astounding number.”

Just as we have learned that the human microbiome has a greater influence on human health than anyone imagined, there’s an emerging understanding that the plant microbiome could be the key to floral health. One initial goal of exploring the plant microbiome has been to determine who’s part of this community and what they’re doing for the plant. The answer, it turns out, depends on location. If you’re a plant, the place you live changes the ecosystem inside you, and that can affect your whole life.

“The plant’s microbiome is strongly determined by where that plant is growing. It matters whether you’re on one side of the mountains or the other. It even matters if you’re 30 miles a way.”

“The plant’s microbiome is strongly determined by where that plant is growing,” Busby says. “It matters whether you’re on one side of the mountains or the other. It even matters if you’re 30 miles a way.” As an example, about an hour north of Corvallis, there’s another scientific garden of cottonwood trees, and, Busby says, “we see very different communities form in those two different places.”

No one knew much about the microorganisms that colonize plants’ external surfaces—and internal tissues—until the arrival of relatively cheap DNA sequencing. A single cottonwood leaf, for instance, might have 50 species of fungi and bacteria living inside. Roots and leaves in the same plant can have notably different microbial communities, but for any particular plant species, there are certain types of microorganisms that make up the community’s core. But across a plant’s range, this can vary greatly.

Some of the best-known mushrooms in the world are the fruits of mycorrhizal fungi, which grow in association with plant roots. When people raised in Europe or in the eastern half of America traveled west, they thought the mushrooms they found were the same as the ones they already knew. But now we understand that they’re different species. “You find very regionally distinct communities of mycorrhizal fungi depending on where you are,” says Kabir Peay, an assistant professor of biology at Stanford. These fungi, by the way, live both inside and outside a plant. They have filaments that reach out into the soil to fetch nutrients, but they also form what Peay calls “these really intimate structures, where they come in close proximity with plant cells,” inside the plant.

Those regional variations in microbial or fungal communities, in turn, affect the structure of plant communities. Disease-causing microbes, for example, can keep one tree species from becoming dominant, but their impact depends on the mix of other microbes they live among. “What does it mean on a large scale when you change the composition of these communities and decrease their diversity?” says Peay. “I don’t think we have the answer quite yet.” But there are indications that it will matter—in a big way—as environments begin to shift. It seems like different microbes are “doing wildly different things” to forests, says Colin Averill, a postdoctoral researcher at Boston University, in Jennifer Bhatnagar’s lab. “If you know which types of fungi are on the roots of trees, you can better predict the ability of the forest to sequester carbon and forecast [the effects of] climate change.”

How exactly a plant’s microbiome makes changes like this is still a mystery, but last year a group of scientists, Busby included, proposed an agenda “analogous to the Human Microbiome Project,” to promote research that could start answering these questions. Scientists are beginning to discover how incredibly diverse the metabolism of plant-associated microorganisms is, says Bhatnagar, an assistant professor at Boston University, with a potential impact on a variety of fields, such as drug discovery and environmental management. “That’s one of the treasures of the plant microbiome that’s still untapped—all the molecules these guys can make and how we can help make them,” she says.

And keeping plants healthy is, in the end, a matter of human health, too. Understanding how to promote or manipulate a plant’s microbiome so that it’s healthier and more productive could lead to breakthroughs in agriculture and give farmers powerful tools other than fertilizers to boost production. If we can understand plant microbiomes, it might help us manage the rocky environmental future. “These cryptic organisms that live in plants contribute in meaningful ways to plant growth, plant development, and plant immunity,” says Busby. “They could be the key to growing enough food for our human populations in the future.”