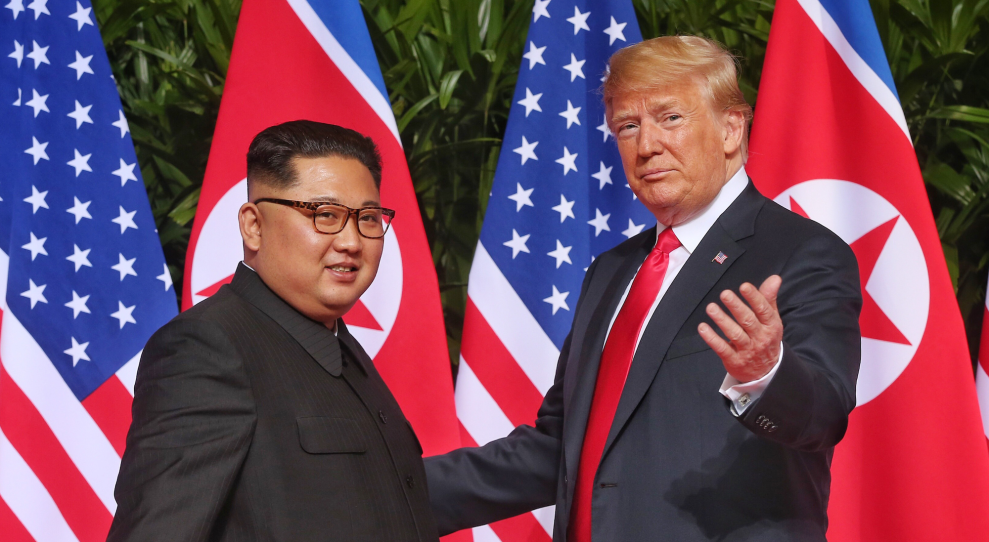 After talking coastal real estate with brutal North Korean dictator Kim Jong Un, President Donald Trump sat for a series of interviews in Singapore. One of them was with former Fox News anchor and current Voice of America correspondent Greta Van Susteren.

First, a word about her new media organization. As we wrote in a profile of the government-funded news agency in 2015:

The Voice of America began during World War II as the official government news service of the United States, broadcasting around the globe in a variety of languages. During the Cold War, when the Soviet Union controlled all the media in its satellite countries, radio waves from the Voice of America could penetrate the Iron Curtain and provide news and information, breaking the isolation of many citizens who lived there.

The official mission of the Broadcasting Board of Governors, the federal agency that overseas VOA and seven other government-funded broadcasters, is to report uncensored “specific American policies and ideas for information-deprived audiences” in order “to advance US foreign policy by providing an example of free press and free media in countries where such freedom does not exist, and to represent the United States, its people, and its policies.” A spokewoman for the BBG at the time described VOA’s audience as “the most repressed and least privileged.”

It would be hard to imagine a nation filled with more repressed and less privileged citizens than the millions of North Koreans who suffer what the New York Times called “widespread human rights abuses” under Kim’s “extreme brutality.” Just an overview tells the story:

Good for them that VOA exists, broadcasting in Korean against their leader’s wishes in an attempt to foster an understanding of the outside world that unknown thousands of them have been brutally punished for even daring to seek out.

It is an instrument of exactly the sort of soft power North Korean defector Thae Yong-ho encouraged the United States to use when he testified before Congress last year. “We can educate [the] North Korean population to stand up by disseminating outside information.”

Thae reminded lawmakers that there is no greater existential threat to regimes like Kim’s than access to uncensored information:

[W]e now know that the communist systems of the Soviet Union and East European countries crumbled as a result of the dissemination of outside information and the subsequent changes in thinking caused among people within those systems. Indeed, the Berlin wall would not have easily collapsed if East German people did not regularly watch West German TV. To sum up, much more needs to be done to increase the flows of information into North Korea.

In an unprecedented event, the president of the United States had an opportunity to speak directly to the people of North Korea after having spent time with their leader firsthand. What did Trump say?

Trump: “Well, I think you have somebody that has a great feeling for them. He wants to do right by them and we got along really well. We had a great chemistry—you understand how I feel about chemistry. It’s very important. I mean, I know people where there is no chemistry; no matter what you do, you just don’t have it. We had it right from the beginning. I talked about that and I think great things are going to happen for North Korea.”

Let’s take this slowly. “[Kim] has a great feeling for them.” “He wants to do right by them.” “We got along really well.” “We had great chemistry.” “I think great things are going to happen for North Korea.”

When asked directly by a US government-sponsored organization that exists explicitly to provide information to the “most repressed and least privileged” citizens of the world, Trump opted to trumpet his “good chemistry” and promise miracles. In short, the brutal dictator is a good guy.

And, oh yes, the country has incredible potential for seaside resorts.