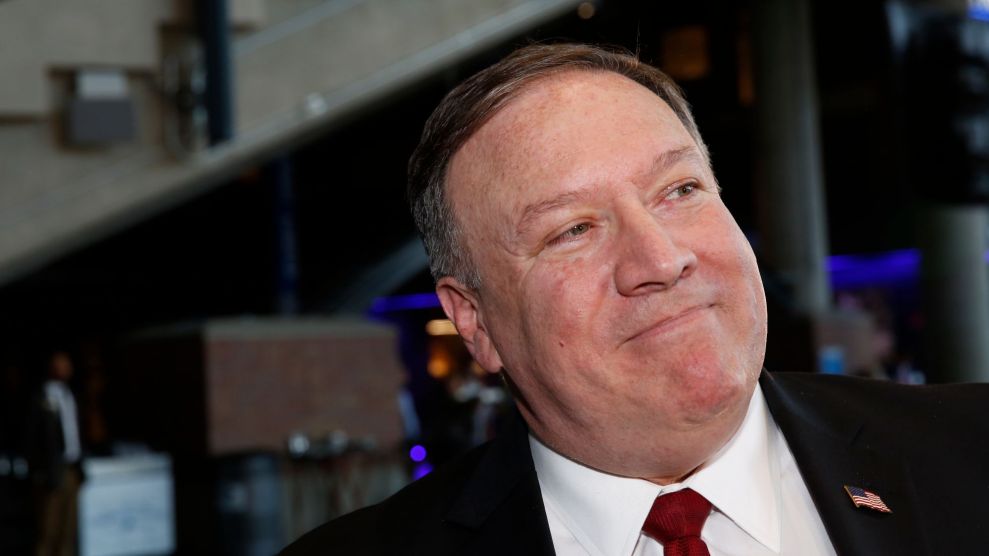 As the Trump administration tries to dig itself out of the firestorm it made, separating 2,342 migrant children from their parents in just five weeks, Secretary of State Mike Pompeo decided it’d be good to celebrate the country’s legacy as safe haven for people fleeing violence and conflict. It is World Refugee Day after all. On Wednesday he released an incredibly tone-deaf statement, which opens:

On World Refugee Day, we join the United Nations High Commissioner for Refugees and our international partners in commemorating the strength, courage, and resilience of millions of refugees worldwide who have been forced to flee their homes due to persecution and conflict.

As global displacement has reached record levels, it is vital that new actors – including governments, international financial institutions, and the private sector – come to the table to assist in the global response to address it. The United States will continue to be a world leader in providing humanitarian assistance and working to forge political solutions to the underlying conflicts that drive displacement.

This commitment to the world’s most vulnerable individuals remains a critical component of America’s national security policy.

The statement also comes just one day after the United States withdrew from the UN Human Rights Council.

Shortly after Pompeo’s statement, President Donald Trump signed an executive order ending his administration’s policy of separating families—which he had previously repeatedly said he could not do—though the Justice Department will continue its “zero tolerance” policy of prosecuting people who illegally cross the border and will try to indefinitely detain children with their parents. Many of them are seeking asylum, which is a legal right.

What’s more, as my colleague Noah Lanard has previously reported, under Trump the United States has dramatically reduced the number of refugees admitted to the country. In October, Trump signed an executive order ending his ban on refugee admissions, but making it dramatically more difficult for refugees from 11 countries—Egypt, Iran, Iraq, Libya, Mali, North Korea, Somalia, South Sudan, Sudan, Syria, and Yemen—to enter the US. As Noah reported in January, “The United States has taken in 44 refugees from the targeted countries since Trump issued his executive order, compared to about 12,000 during the same period last year.” And in December, Noah noted that even after Trump cut refugee-admission levels to a record low, the administration would likely fall short of reaching the cap.

If you narrow in on Syrian refugees, the situation under Trump is even more alarming. Pompeo’s statement specifically highlights the United States’ supposed support of refugees from the war-torn country:

The United States also maintains a steadfast commitment to getting life-saving support to Syrians wherever they are. Since the start of the crisis, the United States has provided nearly $8.1 billion in humanitarian assistance for the millions of people displaced inside Syria and the region.

But the president’s executive order has effectively stopped refugee admissions from there: Just 13 Syrian refugees have been admitted since the beginning of the year.

More broadly, just over 10,000 refugees have been resettled in the US so far this year—compared to more than 32,000 for the same period in 2016, according to data from the Refugee Processing Center. The number of Muslim refugees resettled in the US has also dramatically decreased this year.