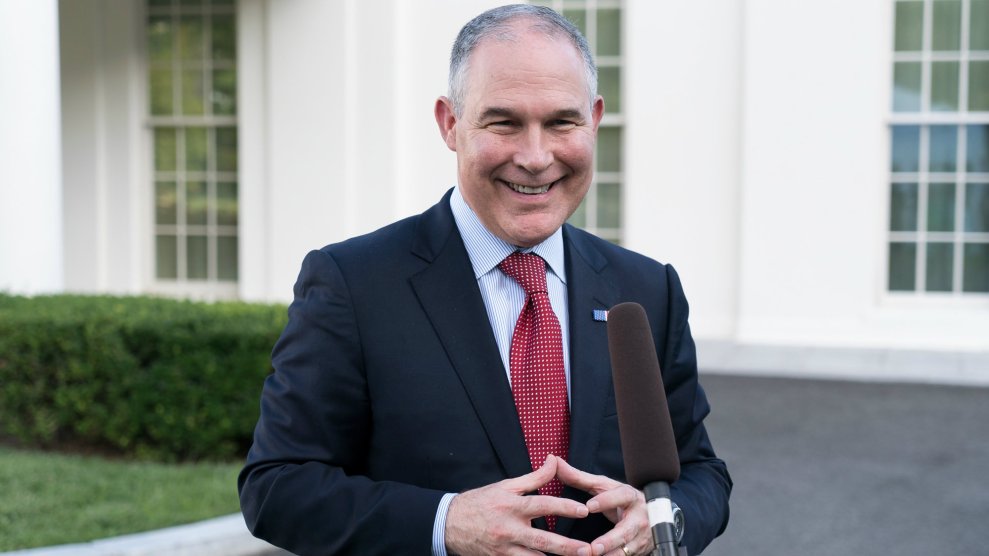 Vermont Law School professor Patrick Parenteau has given lots of interviews since Wednesday, when Supreme Court Justice Anthony Kennedy announced his retirement. Most have focused on how Kennedy’s absence from the court will help Scott Pruitt, the head of the Environmental Protection Agency, in his quest to vigorously dismantle America’s environmental protection laws.

But Parenteau says his interviews thus far have lacked an important sentiment: “No one talks about how weird it is,” he said. “It,” here, is the fact that the head of the EPA is actually attacking rules to protect clean air and water. The American public may have gotten used to Pruitt’s agenda, he said, but “This still isn’t a normal thing.”

Normal or not, it’s happening. Right now, the Pruitt EPA’s attempts to undo regulations around clean air, water, and the environment face court challenges by environmental groups and attorneys general in Democratic states. Should those cases reach the Supreme Court (and many will), Kennedy’s retirement and replacement will have a huge effect on how they’re decided. “There’s no happier person in America right now than Scott Pruitt,” he said.

“One can comfortably say that he was the single most influential justice for environmental law over the past 30 years.”

Kennedy’s departure represents the loss of the Supreme Court’s so-called “swing vote”—the justice who most often determined whether a law was upheld or struck down. “One can comfortably say that he was the single most influential justice for environmental law over the past 30 years,” Richard J. Lazarus, a Harvard law professor, told The New York Times. “Many of those cases were sharply divided, but the one constant was that Kennedy was in the majority in every single case but one.”

If Kennedy is replaced with a someone ideologically similar to the late Justice Antonin Scalia or Associate Justice Neil Gorsuch, there could be lasting consequences—particularly for drinking water and climate change. That’s because Kennedy’s swing vote paved the way for two major Obama-era regulations that Pruitt is now trying to weaken: The Clean Power Plan and the Waters of the United States rule.

Proposed by President Obama in 2015, the Waters of the United States rule sought to put federal Clean Water Act protections on 2 million miles of streams and 20 million acres of wetlands. One-third of Americans get their drinking water from sources connected to these steams and wetlands, Obama’s EPA said, and thus they warranted this level of federal protection. Obama’s EPA also justified its regulation on Justice Kennedy’s opinion in the 2006 case Rapanos v. United States, which established an elaborate test to determine which bodies of water could be regulated under the Clean Water Act. That case ended in a 4-1-4 split, with Kennedy’s being the separate, middle opinion.

If an ultra-conservative justice had been in Kennedy’s place, though, the Supreme Court would have likely come down on the side on Scalia, who wrote in 2006 that the Clean Water Act should only protects major water bodies—not the small streams and wetlands that Obama sought to protect. Because the court failed to decide on that question in 2006—and Pruitt’s repeal of WOTUS is going before the courts—there’s a good chance the Clean Water Act could be radically reinterpreted. A 5-4 ruling like Scalia’s, Parenteau added, would reduce the volume of federally-protected waters by about 60 percent. “That’s a potential reduction in federal protection for over half of the nation’s water bodies.”

Reducing the volume of federally-protected waters is exactly what Pruitt is trying to do. According to the Times, people familiar with Pruitt’s plan believe it was influenced in part by Scalia’s 2006 ruling. Pruitt’s replacement drinking water regulation would cover pollution “only in large, public bodies of water, and in permanent streams and tributaries that drain into them,” the Times reported. “Exempt from regulation would be seasonal streams, water bodies that flow in some portions of the year but not others.” State governments can regulate those seasonal streams, but water bodies are inherently connected. If one state has weak regulations, that could affect water quality in another state.

The Supreme Court may also now be on Pruitt’s side when it comes to repealing the Clean Power Plan, Obama’s signature plan to limit greenhouse gas emissions from coal-fired power plants and therefore slow climate change: Kennedy’s vote was the crucial fifth vote that decided Massachusetts v. EPA, which gave the EPA the authority to regulate greenhouse gases under the Clean Air Act, and which Robinson Meyer at The Atlantic recently called “the most important court case in U.S. climate law.”

Legal experts are divided on how vulnerable the Massachusetts v. EPA ruling might be now that Kennedy’s gone. As the Times noted, the Supreme Court has already upheld that ruling twice; and Chief Justice John Roberts Jr. indicated that “he considered the case an established precedent.” Ann E. Carlson, a professor of environmental law at the University of California, Los Angeles, said a new Supreme Court might take “a more narrow reading of how the Clean Air Act can be used to regulate greenhouse gas emissions,” but likely wouldn’t overturn it.  Parenteau is less sure. “That decision could be overruled,” he said. “You’re gonna see these dominoes go.”

As the Supreme Court looks ahead to its new term beginning this fall, it’s understandable that coverage and political rhetoric might focus on such hot-button social issues as LGBT equality, or the potential to overturn Roe v. Wade, the landmark abortion case. But just ask any parent in Flint, Michigan; any family whose home was devastated by a wildfire or hurricane; or any rural community drinking polluted water from the Mississippi, and they’ll tell you the Supreme Court’s decisions on environmental regulation can have just as dramatic an effect on Americans’ lives.