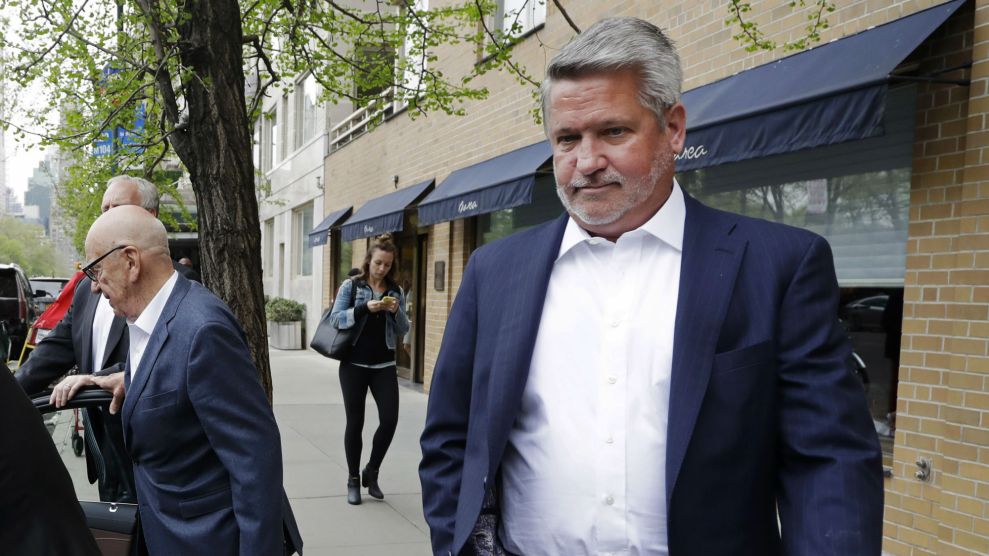 Years ago—many years ago—I was a Fox News commentator. (Forgive me.) And the Fox News exec I dealt with the most was Bill Shine, then the No. 2 at the conservative cable network. On Thursday, the White House officially announced that President Donald Trump had chosen Shine to be the next White House communications chief. The news comes a year after Shine was booted out of Fox following accusations that he covered up the alleged sexual misconduct of Roger Ailes, the former Fox News poobah, and after Shine attempted to keep alleged sexual harasser Bill O’Reilly in his position.

This mind-meld of Fox and Trump’s White House was probably inevitable. Now Trump, without tweeting, can be fully wired into the network that often functions as state television. This is true synergy. A political-corporate M&A.

As we ponder this development, I have one anecdote to share about Shine.

When I was an analyst at Fox—and always free to say whatever I wanted to—I would meet with Shine once in a while. Usually this was when it was time to renew my small contract. After we finished the “negotiations,” we would argue about politics for a bit. Shine always seemed more keen to discuss issues that would juice up the Fox audience than to advance any of his own political preferences or beliefs. He struck me as a die-hard, only-ratings-matter TV exec who could easily fit into a cooking or sports network. And one day, I did gain a bit of insight into how he thinks.

I was in his office for one of our chats. On the wall across from his desk was a deck of TVs showing all the news networks. The volume on each was turned off. Shine was sitting at his desk, and I was in a chair facing him. The televisions were behind me. In the middle of our conversation, Shine said, “Excuse me.” He picked up the phone and dialed an extension. I heard his end of the call: “Why did you change the shot? Why did you cut away from the fire?…OK, OK. Go back to it, and stay on it.” Polite but firm. He hung up.

What was that about? I asked. Shine explained that there was an underground electrical fire near the Gateway Arch in St. Louis, and Fox had been airing a live shot of smoke rising through a grate. When Shine noticed that the director had switched to other news, he called the control booth. Shine wanted to stick with the happening-now images of billowing gray smoke—even though this was far from a dramatic image of a major blaze. It was simply smoke coming through a hole in a sidewalk. No flames. No heroic fire-fighters battling a conflagration. No soot-covered victims. Just smoke. The network followed Shine’s command and returned to the shot.

Why do you want to broadcast that? I inquired. With a wide grin on his face, Shine explained: “People will sit on their couches and watch a live shot of a fire for hours and hours. They will not switch the channel. Flames are the best. But smoke is the next best thing. We have smoke. We stick with smoke.”