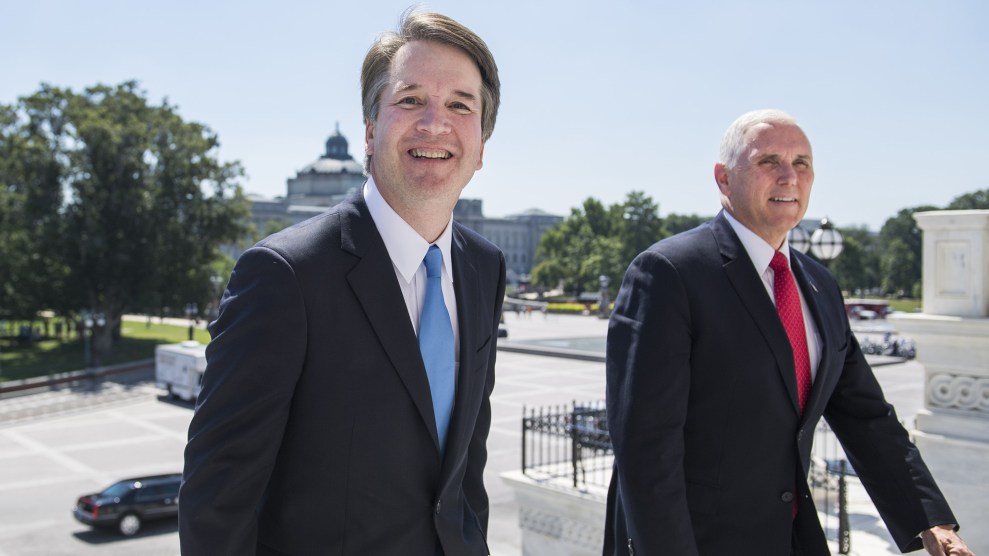 In February 2017, Brett Kavanaugh traveled to the University of Notre Dame in South Bend, Indiana. It was four days after President Donald Trump had selected Neil Gorsuch to fill a vacant seat on the US Supreme Court—but with at least four years in office ahead of him, Trump was likely to name more justices. For politically savvy judges and legal scholars, every opinion and every speech are part of a long audition for those coveted spots on the nation’s highest court. And Kavanaugh, a Washington, DC, appellate court judge and former President George W. Bush staffer, certainly fits that description. In Indiana, he focused on a topic that has become a major issue in conservative legal circles: reining in government regulation.

Kavanaugh, who became Trump’s second Supreme Court nominee earlier this month, didn’t frame it that way. But the conservative crusade against regulations is at the core of the issue he discussed—a wonky legal doctrine known as Chevron deference. Developed in a 1984 Supreme Court decision, Chevron is a framework judges use in determining whether the rules and actions of executive branch agencies are consistent with laws that have been passed by Congress. The modern administrative state promulgates thousands of rules each year, as highly specialized regulators work to implement congressional legislation that is often imprecise or unclear. That makes Chevron a key precedent shaping everything from health care to technology to the environment.

A Supreme Court hostile to the Chevron ruling would be a grave threat to Democrats’ ability to pursue progressive policies.

The issue has a complex history. Under President Ronald Reagan, the Environmental Protection Agency implemented a new rule that allowed pollution-producing industrial plants to obtain new equipment that was not up to code as long as total emissions did not increase. A number of environmental groups challenged the rule as incompatible with the Clean Air Act. But the Supreme Court upheld it in Chevron v. Natural Resources Defense Council as a reasonable interpretation of the law.

The case has had a lasting impact and, paradoxically, has become an important source of authority for regulators looking to crack down on abuses by industry. Under Chevron, the courts defer to a federal agency’s interpretation of a statute when the law’s language is ambiguous and the agency’s interpretation is considered reasonable. Chevron therefore allows agencies to implement rules and regulations, even when the statutes—often vague—do not obviously call for them, or when judges would have personally interpreted the law differently. Part of the logic is that agencies, which build up expertise on the complex issues they regulate, are better positioned than judges to create workable rules.

Kavanaugh is not a fan. “The Chevron doctrine encourages agency aggressiveness on a large scale,” he said at Notre Dame, echoing an argument he’d made in the Harvard Law Review the year before. “Under the guise of ambiguity, agencies can stretch the meaning of statutes enacted by Congress to accommodate their preferred policy outcomes.” Ten months after that speech, the White House added Kavanaugh to its list of people Trump would consider for the next Supreme Court vacancy—a list, largely shaped by the conservative Federalist Society, that Trump first released on the campaign trail to convince conservative groups to support him.

Kavanaugh wouldn’t be alone on the court. Gorsuch arrived at the Supreme Court last year as a prominent critic of Chevron and has continued to oppose it. Chevron, he wrote while on the 10th Circuit Court of Appeals, asks judges to abdicate their “duty to exercise their independent judgment about what the law is.” In an opinion this spring, Gorsuch signaled his willingness to overturn it, writing, “[W]hether Chevron should remain is a question we may leave for another day.” (In a coincidence of history, it was Gorsuch’s mother, Anne Gorsuch, who as EPA administrator under Reagan approved the rule that led to Chevron.) Other conservatives on the Supreme Court, including Chief Justice John Roberts, as well as many Republican-appointed judges on the lower courts, have also sought to rein in the application of Chevron. Conservative think tanks and the Federalist Society have joined the effort, too.

That has progressive court-watchers worried. A Supreme Court hostile to Chevron would be a grave threat to Democrats’ ability to pursue progressive policies if they reclaim the White House in 2020 and beyond. In recent years, major cases have turned on Chevron deference, including one of the challenges to Obamacare, a legal battle over the Obama administration’s net neutrality rule, and President Barack Obama’s limits on carbon emissions. (The Trump administration has since reversed the net neutrality and carbon rules, the latter of which was still making its way through the court system.) “It really touches every part of the government,” says Jed Stiglitz, an administrative law expert at Cornell Law School.

Should a Supreme Court with Kavanaugh, Gorsuch, and a durable conservative majority weaken or abandon Chevron, it would allow judges to strike down regulations if they don’t comport with the judge’s interpretation of the statute—a standard that would allow the courts to block agency actions with much greater frequency. In other words, Chevron shifts power from the courts to the agencies and the executive branch, while the movement against Chevron would return veto power to the courts.

Without Chevron deference, agencies could end up lacking the tools to deal with modern problems.

The impact would be magnified by the fact that Congress, famous in recent years for failing to legislate, has largely gotten out of the business of clarifying and amending statutes. The result is that agencies are tasked with enforcing laws that are increasingly outdated and therefore increasingly ambiguous about how to deal with newly arising issues. Without Chevron deference, agencies could end up lacking the tools to deal with modern problems.

Trump and Senate Republicans are currently reshaping not just the Supreme Court, but also the lower courts, by confirming conservative judges at record speed—and like Kavanaugh, these judges tend to be decidedly pro-business and skeptical of agency power and regulation. “It’s fair to be concerned, and particularly given that the nature of the judiciary is likely to be conservative, that the shift toward the judiciary is going to be problematic for a future Democratic administration,” says Stiglitz.

Historically, both liberals and conservatives have taken turns denouncing Chevron. When it was decided during the Reagan administration, liberals lambasted the ruling, and conservative scholars praised it. “We hated Chevron,” recalls Michael Herz, an expert on administrative law at Yeshiva University’s Cardozo School of Law, who worked at the Environmental Defense Fund in the years after Chevron came down.* At the time, the result of Chevron was that the EPA, under Presidents Reagan and George Bush, watered down environmental regulation. “There were a lot of issues that we thought we had won before Congress, and now the agency was under-reading the statute, and the courts were letting them get away [with] it,” he recalls. “It was clear to us that Chevron was bad for the good guys and bad for the environment, because it was—in that setting.”

By the time the Obama administration came to office, the shoe was squarely on the other foot. The Natural Resources Defense Council and other environmental groups, as well as Obama’s EPA, relied on Chevron deference to push aggressive interpretations of the Clean Air Act in order to address climate change.

Though the politics of Chevron have varied depending on which party is in power, on balance, the doctrine does appear to favor Democratic priorities. “Chevron is probably, all in all, a doctrine that Democrats would like more than Republicans over time…because it does support robust governance,” says Herz. In a blog post last year, Michael Dorf, a constitutional scholar at Cornell Law School, evaluated Chevron and found that it will more often lead to green-lighting new regulations than removing or weakening regulations—evidence, he wrote, “for the conclusion that Chevron skews liberal.”

Conservatives certainly seemed to have grasped this fact. In January 2017, a few weeks before Kavanaugh delivered his Notre Dame speech, the GOP-controlled House of Representatives passed a bill that would, among other things, eliminate Chevron deference. The Senate has never taken it up.

Kavanaugh’s critique of Chevron is largely about process, though his discomfort with executive agency power is also evident. He argues that the doctrine puts judges in the awkward position of deciding what it means for a law to be ambiguous—and just how much ambiguity is necessary to require judges to defer to the agency’s reasoning. He frames Chevron as undermining judges’ ability to be neutral and nonpartisan by forcing jurists to make tricky judgement calls. Kavanaugh advocates for essentially abandoning Chevron in most cases, returning to a system in which courts “would simply determine the best reading of the statute,” he said at Notre Dame. “Courts would no longer defer to agency interpretations of statutes. This would help keep agencies within statutory bounds and help prevent a runaway executive branch that exploits ambiguities in governing statutes to pursue its broad policy aims.”

Unsurprisingly, Kavanaugh has developed an anti-Chevron record on the bench, including in a recent legal battle over net neutrality. In 2015, the telecommunications industry sued the Federal Communications Commission after the agency adopted a rule barring internet providers from privileging access to some websites over others. The case reached the DC Circuit, which upheld the rule, citing Chevron. When the full appeals court refused to rehear the case, Kavanaugh dissented. Net neutrality, Kavanaugh argued, fell under an exception to Chevron commonly referred to as the “major questions” doctrine. This doctrine stipulates that courts need not defer to agencies if the regulation involves an issue of major political or economic significance.

Several administrative law experts saw Kavanaugh’s net neutrality position as not just applying major question exception but as going beyond current Supreme Court precedent to expand it. “That is a strong and probably revealing case of an instance in which his instinct is: I am not going to conclude the agency has authority to do something that’s a big deal unless I have no choice,” says Herz.

This post has been updated to reflect Herz’s former employer.