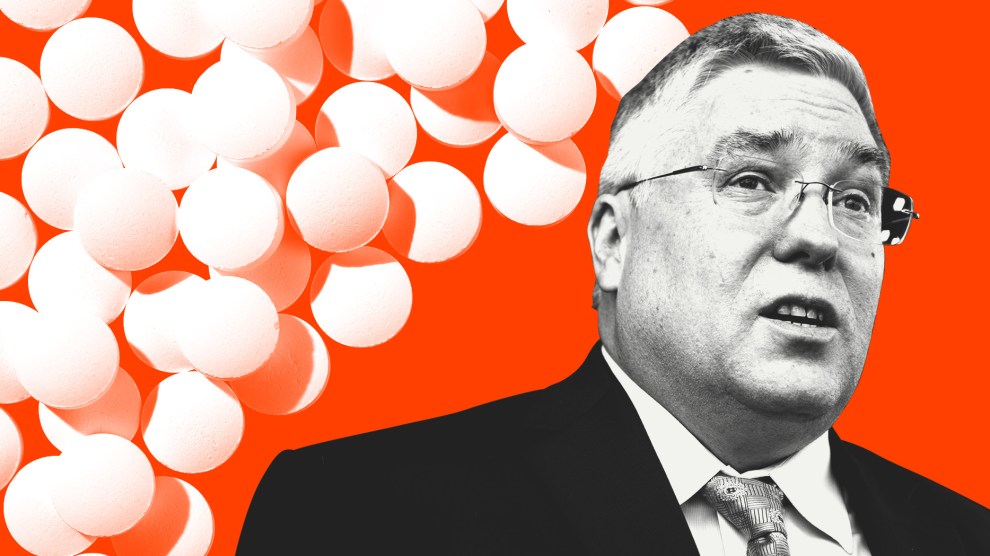 Amid calls to “drain the swamp” and “reinvent” Washington, Patrick Morrisey—the West Virginia Republican running for US Senate—often brags that no one has done more than he has to address the state’s devastating opioid epidemic.

Since first working on opioid issues in 2013, no one has been more aggressive fighting to stop senseless death. If you care about ending drug abuse, this election is an easy choice. We attack fundamental causes of the epidemic, while Joe slept at the switch as Governor. #wvsen

For many in his state, the issue is personal: West Virginia has the highest overdose rate in the country. Republicans there see opioids as the “most important” issue facing the country, according to a Fox News poll of likely primary voters in April. So its no surprise that the epidemic is now at the center of one of the nation’s most high-profile elections—a race that could determine which party controls the Senate.

Morrisey, who has served as West Virginia’s attorney general since 2013, is attempting to unseat Democratic incumbent and former Gov. Joe Manchin in an increasingly red state that President Donald Trump carried by more than 40 points. Coal baron and ex-convict Don Blankenship is attempting to run for the seat, representing the right-wing Constitution Party after losing to Morrisey in the Republican primary. The stakes are high: As a recent Politico profile put it, “Trump’s popularity in West Virginia has Republicans salivating,” and the 70-year-old Manchin is preparing for “the toughest race of his career.”

On the surface, Morrisey’s refrain of leading the fight to stop the epidemic makes sense. As attorney general, he sued the pharmaceutical distributors that flooded the state with millions of painkillers. The distributors—including Cardinal Health, McKesson, and AmerisourceBergen—were responsible for shipping in 780 million hydrocodone and oxycodone pills over a six-year period, according to a Charleston Gazette-Mail investigation. The resulting settlements brought in $78 million from the drug wholesalers. Morrisey contends that the crisis has been perpetuated by a broken health system. “There are too many financial incentives that are in place in the system that have caused this spiraling, out-of-control number of pills to land in all of our states,” he said in a February speech alongside US Attorney General Jeff Sessions, who was announcing a task force targeting opioid manufacturers and distributors. “That has to end.”

But critics are quick to point out that Morrisey was already quite familiar with such incentives. Before he took over the lawsuits from his Democratic predecessor in 2013, Morrisey was a lawyer and lobbyist in Washington, DC, representing some of the same companies he would later sue as attorney general. In 2010 and 2011, Morrisey lobbied for the Healthcare Distribution Management Association, the industry group representing pharmaceutical distributors including Cardinal Health, McKesson, and AmerisourceBergen. The group paid $250,000 for Morrisey’s work over a 16-month period. Public records show that between 2004 an 2011, Morrisey’s lobbying clients also included the National Association of Chain Drug Stores; pharmaceutical companies Celgene, Sanofi-Adventis, and Novartis; and nutrition company Herbalife International, which was later subject of a two-year Federal Trade Commission investigation.

Morrisey didn’t cut ties with the pharmaceutical industry when he was elected to office. His wife, Denise Henry Morrisey, lobbied for Cardinal Health, the state’s leading opioid supplier, from 1999 to 2016. As Patrick Morrisey was pursuing settlements with Cardinal, Denise Morrisey was lobbying federal lawmakers on behalf of the company on legislation that aimed to tighten regulation of hydrocodone. The Charleston Gazette-Mail recently noted that after Patrick Morrisey became attorney general, Cardinal Health paid Denise Morrisey and her lobbying firm $1.4 million.

Cardinal Health ultimately settled with the state in 2017 for $20 million for its distribution of pills between 2007 and 2012. West Virginians on both sides of the aisle—from Blankenship’s primary campaign to labor organizer Ken Hall—have accused Morrisey of settling for “pennies on the dollar.”

“Is there an appearance of a conflict of interest there?” says Mike Pushkin, a Democratic state lawmaker. “I’d say so.”

Now, pharmaceutical lobbyists are helping fund Morrisey’s campaign, according to Federal Election Commission data. (And not just pharma lobbyists—a recent Politico article noted that current and former lobbyists made up nearly 20 percent of the individual donations to the campaign.) Several pharmaceutical executives gave $2,700, the maximum donation that a campaign can use from an individual prior to a primary election. (It is possible the donors have given more since the May primary; the most recent FEC data is from April.) Here are a few examples of donations in the past year:

The contributions are striking in light of Morrisey’s promise “to not just change Washington” but “blow it up and reinvent it,” as he says in a campaign ad featuring a West Virginia mountain crushing the US Capitol.

I'm running for U.S. Senate not to just change Washington, but to blow it up and reinvent it.

Washington is fundamentally broken. We can fix that with a West Virginia conservative fighter! #wvsen pic.twitter.com/hogbOoYnms

The pharmaceutical history has proved to be something of a stumbling block for Morrisey on the campaign trail—as when, in a debate between Republican Senate candidates on Fox in May, host Bret Baier said, “As Attorney General, you did sue this major pill distributor, but at the very same your wife was lobbying for that pill distributor. Is that not a conflict of interest?” An uncomfortable-looking Morrisey responded, “Look. We have handled everything exactly right. And I think most people around the state would say we’ve been more effective taking on the opioid epidemic than anyone.” Blankenship’s campaign used Morrisey’s pharmaceutical history as fodder for attack ads this spring. One featured a CBS News investigation from 2016 that details Morrisey’s connection to Cardinal:

Manchin has largely steered clear of negative ads so far, but the opioid epidemic is still pivotal to his campaign. A recent ad, paid for by the Democratic Senate Majority PAC, features a Charleston lawyer, David Grubb, talking about his daughter’s struggles with opioid addiction. Over piano music, Grubb explains that his daughter, Jessie, was in recovery until a doctor prescribed high doses of opioids after a surgery and she overdosed. Manchin later sponsored legislation, dubbed Jessie’s Law, to make sure doctors know patients’ addiction history before prescribing painkillers. “When it came down to what really matters in life,” David says, “Joe was there.”

But Manchin carries pharmaceutical baggage of his own: His daughter, Heather Bresch, is the CEO of Mylan Pharmaceuticals, which made headlines in 2016 for the soaring cost of EpiPens, the emergency medication used to treat severe anaphylactic allergic reactions. Mylan is also a small-time opioid maker, selling generic versions of off-patent opioids that make up about 1 percent of prescription painkillers sold in the United States in 2016. His supporters brush off allegations of a conflict of interest, noting that Manchin has never been on the payroll of a pharmaceutical company. “She’s not the on the ballot,” says state Democratic Party chair Belinda Biafore, referring to Bresch.

Though Manchin has sided with Republicans on issues such as immigration and guns, drawing criticism from the left, he has sided with Democrats in his public-health-oriented approach to the opioid the epidemic. The senator voted repeatedly against efforts to repeal the Affordable Care Act, citing the 172,000 West Virginians who rely on it for insurance—many of whom use it to pay for addiction treatment. In addition to Jessie’s Law, he introduced legislation that would impose a tax on opioid painkillers, paid by pharmaceutical companies, to generate funding for addiction treatment.

Morrisey, meanwhile, is among the state attorneys general suing the US government on the grounds that last year’s tax reform rendered major parts of the Affordable Care Act, better known as Obamacare, unconstitutional. He has taken a law-enforcement-focused approach to the epidemic, proposing state legislation earlier this year that would include a “surge” of 150 new troopers and 50 new investigators to help stem the flow of drugs into the state.

“We need to protect our borders,” Morrisey said at a press conference earlier this year. “We have a lot of roads that run in and out of our state.”

Recent polling gives Manchin a small lead in the race, though it is likely to be a bitter fight. And there’s no reason to believe the opioid issue will fade anytime soon. As Pushkin, the Democratic lawmaker puts it, the epidemic “will influence peoples’ votes because it influences every aspect of their lives.”