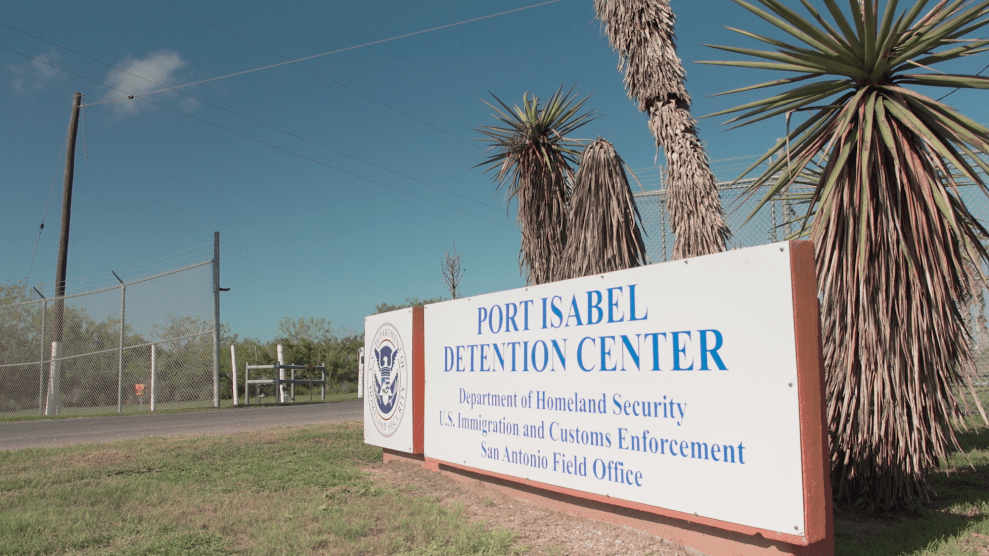 The entrance to the Port Isabel detention center in Los Fresnos, Texas, where hundreds of separated parents are being held.Mark Helenowski/Mother Jones

Listen to reporter Noah Lanard explain how the government appears to be using bond denials to prolong family separation at the border, in this episode of the Mother Jones Podcast:

“It’s a completely unnecessary and unreasonable delay in the reunification of the family.”

In an interview with Mother Jones, Austin-based immigration attorney Kate Lincoln-Goldfinch says that by denying bond and forcing migrant parents to remain in detention while they apply for asylum, US Immigration and Customs Enforcement is “completely disobeying the judge’s order—intentionally.” Jodi Goodwin, a south Texas immigration lawyer who is working with separated parents at the Port Isabel detention center, agrees that the bond denials conflict with the recent injunction.

It is unclear how many migrants have been denied bond in recent days, but Lincoln-Goldfinch and Goodwin pointed to seven such denials they said had occurred since Thursday. The migrants have the right to appeal bond denials, but that process can take weeks.

Under US law, migrants who are apprehended by immigration agents and express a fear of returning to their home countries are given what is known as a “credible fear” interview in which an immigration officer determines whether there is a “significant possibility” that they would be persecuted if they were sent home. Migrants who pass this interview are then allowed to remain in the United States while they apply for asylum. Roughly 80 percent of asylum seekers pass their credible fear interviews, though only about half of those—and about 20 percent of migrants from El Salvador, Guatemala, and Honduras who apply—ultimately receive asylum.

After a person passes a credible fear interview, ICE deportation officers make bond determinations, setting the amount of money the individual must post in order to be released from detention while the immigration case moves forward. The bond money is returned to the migrant after the case is resolved. Lincoln-Goldfinch, who is working with separated mothers at the T. Don Hutto detention center near Austin, says that until late last week, parents at the facility who passed credible fear interviews were usually being released with bonds of about $1,500.

Lincoln-Goldfinch and Goodwin speculated that ICE might be trying to manipulate parents into dropping their asylum claims. Goodwin also suggested that ICE might be attempting to buy time before transferring parents and children to family detention facilities, where the Trump administration claims it has the authority to detain them indefinitely—despite a 2016 court ruling that blocks it from doing so. Family detention centers are close to full, but the administration is working to build new ones.

The mother Lincoln-Goldfinch is representing in this case has a five-year-old boy who is currently living with a family member after being released from the custody of the Department of Health and Human Services’ Office of Refugee Resettlement. If the mother had been released, the two could have easily been reunited after six weeks apart. Lincoln-Goldfinch says her client’s son is suffering as ICE fights to keep them separated. She says he is crying out in his sleep for his mother and that he was recently terrified a police officer he saw would take him away.

Lincoln-Goldfinch says she also reviewed the paperwork of a second mother at Hutto who was denied bond after passing a credible fear interview.

Goodwin says lawyers working with the South Texas Pro Bono Asylum Representation Project have met with more than 200 separated parents at the Port Isabel detention center in south Texas and continue to meet with more through word-of-mouth referrals from detained parents. She says five parents who passed credible fear interviews—four mothers and one father—have been denied bond at Port Isabel since Friday. They were the first separated parents at Port Isabel to pass their credible fear interviews that Goodwin is aware of.

Goodwin says she not been told of any official change in ICE policy, but she agrees with Lincoln-Goldfinch that what is happening is unusual. “They might have set a high bond” in the past, she says, “but they would generally put some bond.”

Matthew Bourke, an ICE spokesman, said in an email that he was unable to comment on the cases of the specific migrants involved and was “not immediately aware of any change in bond policy.” He added that “custody decisions are made on a case-by-case basis weighing a number of factors including immigration history and criminal history.”

Bourke also stated, “I believe aliens who have passed the credible fear threshold still have to go through a custody redetermination hearing in front of an immigration judge before they’re eligible for bond.” Both Lincoln-Goldfinch and Goodwin say that is incorrect, explaining that a bond determination can be appealed but does not have not be.

The moment “she passes a major hurdle in her case,” Lincoln-Goldfinch notes, “they slap her with this decision prolonging detention and prolonging her separation from her child.”

The next step for parents denied bond is to appeal to an immigration judge who could overturn ICE’s bond determination. Goodwin says that will take at least a week, and even if a migrant wins this appeal, ICE can temporarily halt the judge’s ruling if the agency files its own appeal within 24 hours. Lincoln-Goldfinch says lawyers will now have to spend time making a case for why their clients are not flight risks. She says the whole process can take several weeks, even though she believes her client will eventually receive bond. “It’s a completely unnecessary and unreasonable delay in the reunification of the family,” she adds.

Goodwin also says credible fear interviews at Port Isabel have been abbreviated in recent days, with asylum officers asking migrants for only biographical information. That could stem from a lack of resources, but it might also be sign of confusion over a court order that was issued on Thursday by Port Isabel immigration judge Morris Onyewuchi. After a Honduran mother appeared before Onyewuchi in what he described as a state of “severe emotional disturbance,” he stopped his review of a credible fear interview that the woman had not passed. Onyewuchi halted the woman’s case until the Department of Homeland Security can address the problems caused by her separation from her 9-year-old daughter. The mother is blind in one eye and has spoken with her daughter only once since they were separated.

Onyewuchi wrote that the court “cannot conduct a meaningful review that comports with Constitutional Due Process to a fair trial” when the lack of information about her child’s location is causing such extreme distress. “The Respondent cannot provide meaningful testimony under such severe emotional disturbance,” he wrote.