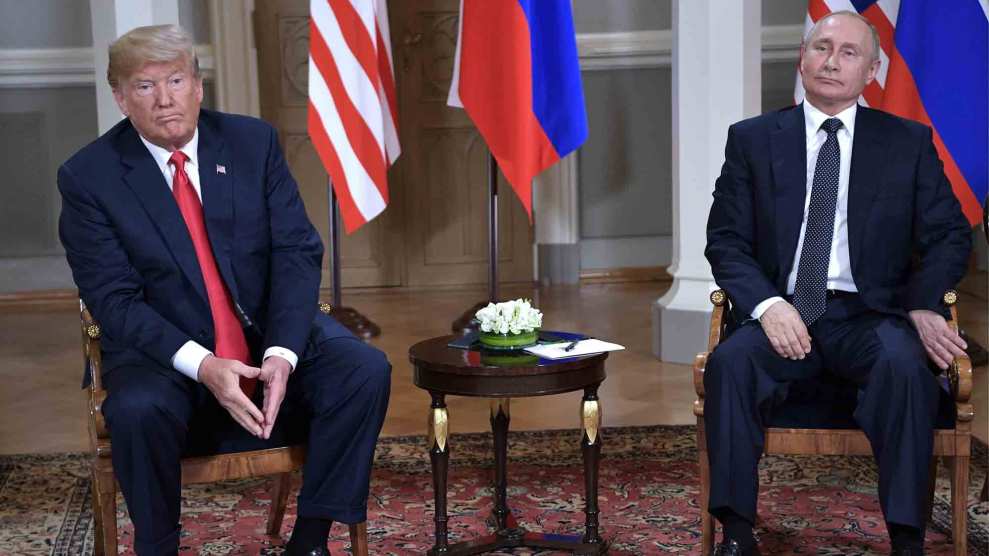 Listen to David’s reaction to the Helsinki summit on the Mother Jones Podcast—the conversation starts at 23:55 on the player below.

Since being elected president, Donald Trump has vociferously claimed he engaged in “no collusion” with Vladimir Putin’s attack on the 2016 US election and that the investigation of any interactions between him and his associates and Russians was a “witch hunt” or a “rigged witch hunt.” Yet his historic Helsinki summit with Putin—and particularly the unsettling joint press conference they held—provided a clear indication that Trump is indeed guilty of one form of collusion: colluding with Putin to cover up Moscow’s criminal assault on American democracy.

I’ve been making this case for over a year, noting that “Trump actively and enthusiastically aided and abetted” Putin’s plot against the United States by supporting Moscow’s denial that it mounted information warfare that undermined the election and helped Trump. Put aside the notion of whether Trump or anyone in his crew schemed with Russians on how to pull this off. Once the attack became public, Trump and his lieutenants continuously maintained it was nothing but a hoax. When the Democratic National Committee in June 2016 revealed it had been hacked by Russian operatives, the Trump campaign issued a statement huffing, “We believe it was the DNC that did the ‘hacking’ as a way to distract from the many issues facing their deeply flawed candidate and failed party leader.” After WikiLeaks released over 20,000 DNC emails right before the start of the Democratic convention the following month, the Hillary Clinton campaign tried to make the point this was Russian sabotage. Donald Trump Jr. and Paul Manafort hit the cable news shows to call this claim absurd. (Yet just weeks earlier, both had attended a secret meeting in Trump Tower with a Russian emissary, after being told this woman was bringing the campaign dirt on Clinton as part of a secret Kremlin plot to assist Trump.)

Trump led the denial charge himself. After being briefed in mid-August by US intelligence that Russia was behind the hack-and-dump operation against the Clinton campaign, he repeatedly declared that there was no reason to suspect Moscow was the culprit. He did this in speeches. And he did this in the debates with Clinton. At their first face-off, he said the perp “could be somebody sitting on their bed that weighs 400 pounds, OK?” And following the Department of Homeland Security and the Office of the Director of National Intelligence’s release of a statement in early October 2016 stating that intelligence showed Russia was indeed behind this attack, Trump still vigorously insisted there was no reason to believe Moscow was involved.

Throughout this period, Russia, of course, was denying it was doing anything untoward. So Trump was echoing Putin’s disinformation. He was pushing Moscow’s line and dismissing the US government’s official finding. That made it easier for Russia to get away with the covert operation. With Trump very publicly challenging the notion that an attack was underway, Republican leaders—most notably, Senate Majority Leader Mitch McConnell (R-Ky.)—were disinclined to join the Obama administration in any effort to challenge or thwart Putin’s assault on the US political system. Trump provided Putin cover.

He continued to do so after the election. When the US intelligence community in January 2017 released an assessment confirming Russia had engaged in this information warfare and noting that this had been done in part to boost Trump’s chances, Trump refused to acknowledge the conclusions or to take clear action against Russia. Rather, he assailed the intelligence community, comparing it to Hitler’s regime. (“Are we living in Nazi Germany?” he tweeted.) And he stuck with this course through the first year of his presidency. After meeting with Putin at the Asia-Pacific Economic Cooperation summit in November 2017, Trump told reporters on Air Force One, “He said he didn’t meddle. I asked him again. You can only ask so many times.” Trump added: “Every time he sees me, he says, ‘I didn’t do that’, but I really believe that when he tells me that, he means it.” Trump continued, “I think he’s very insulted by it.”

Even though his administration has taken some actions against Russia—such as expelling Russian diplomats after the nerve agent attack in England—Trump has not stopped amplifying Putin’s assertion that Russia is innocent. And he tells his base—all those Fox News watchers—that the investigations are bunk and that the Deep State has manufactured this scandal to nail him. That is, Putin and the Kremlin are not the villains; the enemy is within.

As Putin has tried to cloak Russian culpability, Trump has been an eager helpmate. In the run-up to the Helsinki meeting, Trump  tweeted, “Russia continues to say they had nothing to do with Meddling in our Election!”

Russia continues to say they had nothing to do with Meddling in our Election! Where is the DNC Server, and why didn’t Shady James Comey and the now disgraced FBI agents take and closely examine it? Why isn’t Hillary/Russia being looked at? So many questions, so much corruption!

And at a campaign rally a few days later, he declared that Putin was “fine.” Trump was legitimizing both Putin and his disinformation.

Then came the meltdown in Finland.  Shortly after a 90-plus-minutes private meeting with Putin—no aides were present—Trump stood next to the Russian autocrat at a press conference, as Putin once more denied Russian intervention in the 2016 election. Trump then noted he had discussed with Putin “the issue of Russian interference in our elections,” without challenging Putin’s denial. He allowed the denial to stand. By saying nothing—just days after the Justice Department had indicted 12 Russian military officers for the criminal scheme—Trump was providing the Russian strongman a platform for continuing the cover-up.

It got worse. Once again declaring there was “no collusion,” Trump attacked special counsel Robert Mueller’s investigation as a “disaster” and “ridiculous.” When he was asked whether he believed the US intelligence community or Putin, first Trump criticized the FBI and prattled on about the phony issue of the DNC server, yet again purposefully distracting from the core elements of the Trump-Russia scandal. Next, he said, “My people came to me. [Director of National Intelligence] Dan Coates came to me and some others, they said they think it’s Russia. I have President Putin; he just said it’s not Russia. I will say this: I don’t see any reason why it would be.” Trump said he had “confidence” in both sides, meaning both Putin and his intelligence team. He continued: “I have great confidence in my intelligence people, but I will tell you that President Putin was extremely strong and powerful in his denial today.”

Here was Trump drawing an equivalence between his top intelligence advisers and Putin, the former KGB officer. It was a stunning moment. What more could Putin want? The president of the nation, which, according to its own intelligence and law enforcement agencies, was attacked by Russia, was giving Putin’s denial as much credence as Mueller’s indictments and the findings of various spy agencies, as well as the Republican-led intelligence committees of the House and Senate (which each confirmed the intelligence community’s assessment).

Trump was toiling (and trolling) hand-in-hand with Putin to advance Moscow’s deceit. And here’s a key question: was this performance jointly planned in advance? Both men said they did discuss the matter during their private tete-a-tete. It seems likely—in fact, highly probable—they talked about what they would say on this subject during the post-meeting press conference. (The public cannot be sure of this, because no one else, besides interpreters, attended the session, and no transcript has been released.) Yet the events of the past two years already indict Trump: he has repeatedly aided Putin’s attempt to escape responsibility for the attack. And today, the two men issued respective messages—which might have been coordinated—that each supported and advanced Russian disinformation.

There you have it. Collusion. Trump working with Putin, in the open, to make the Russian attack on the United States disappear. Trump himself has proven the case.