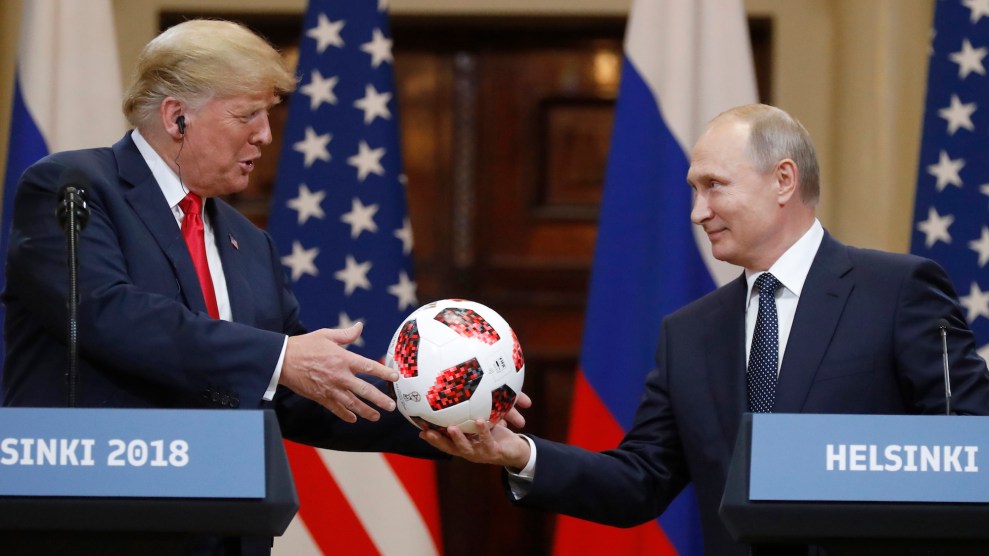 President Donald Trump’s remarks at a joint news conference with Vladimir Putin on Monday were an immediate disaster, as he drew bipartisan condemnation for siding with the Russian leader over his own intelligence and law enforcement agencies about the Russian attack on the 2016 election. But Putin’s remarks were also bad news for Trump. Here are three things the Russian president said that contradicted or cast doubt on Trump’s claims about his dealings with Russia:

When an AP reporter asked Putin if the Russian government has any “compromising material” on Trump or his family, Putin offered an odd answer: “When President Trump was at Moscow back then, I didn’t even know that he was in Moscow. I treat President Trump with utmost respect, but back then when he was a private individual, a businessman. Nobody informed me that he was in Moscow.” Putin’s claim that he had no idea Trump was in the Russian capital was curious, as the contest was a big deal that drew major media coverage. Trump’s partner in the venture was a Russian oligarch named Aras Agalarov, who had earned the nickname “Putin’s builder.” Trump had been told he could expect a meeting with Putin. At the last minute, as David Corn and Michael Isikoff report in Russian Roulette: The Inside Story of Putin’s War on America and the Election of Donald Trump, the visit didn’t happen. But Trump got a call from Dmitry Peskov, his right-hand man and spokesman, who told him Putin was sorry that the meeting could not be arranged due to a scheduling issue. Peskov also told Trump that Putin would be sending a high-level emissary to the Miss Universe event and that Putin had a gift for him. The gift, delivered weeks later, was a black lacquered box with a sealed letter inside.

It’s unlikely Peskov would have such a conversation with Trump—who the previous year had talked about running for president—without Putin’s knowledge. So why would Putin deny knowing Trump was in Moscow? As for the “compromising material,” Putin said, “It’s difficult to imagine an utter nonsense of a bigger scale than this.” His hard-to-believe remark about Trump’s trip certainly did not bolster his denial regarding the alleged kompromat.

US intelligence agencies and the Senate Intelligence Committee have concluded that Russia not only interfered in the 2016 election, but did so to help Trump win. Trump, though, has rejected the idea that Putin favored him in the election, repeatedly asserting that Russia preferred Hillary Clinton for president rather than him due to his tough-guy policies on military spending and energy production. “What I keep hearing about that he would have rather had Trump, I think ‘probably not,’ because when I want a strong military, you know she wouldn’t have spent the money on military,” Trump said last year. “When I want tremendous energy, we’re opening up coal, we’re opening up natural gas, we’re opening up fracking, all the things that he would hate.”

At Monday’s press conference, Putin was asked, “Did you want President Trump to win the election, and did you direct any of your officials to help him do that?” Putin replied, “Yes, I did. Because he talked about bringing the US-Russia relationship back to normal.” Putin seems to have made it clear that he favored Trump. His statement could even be interpreted as acknowledging intervention in the election, though that seems highly unlikely. (It’s possible Putin misheard the question—which came after he talked about potentially cooperating with the United States on law enforcement matters—meaning his answer might have been related to that issue.) In any event, his reply could be read as undercutting Trump’s claim he was not Putin’s favored candidate.

When pressed about extraditing the Russian intelligence officers who were indicted last week for hacking the Democratic National Committee, the Democratic Congressional Campaign Committee, and members of Clinton’s campaign in 2016, Putin asserted that he might agree to let US investigators participate in questioning Russian agents. But he said he’d do so only if the United States allowed Russians to come here and take part in the questioning of American intelligence and law enforcement officials about “illegal actions on the territory of Russia.” And he cited the activity of Bill Browder, a former major investor in Russia who drew the Kremlin’s ire by leading a push to pass the Magnitsky Act, a law that sanctions certain Russians for human rights violations. Putin said he suspects that US intelligence officials were involved in channeling $400 million from Browder to Clinton’s campaign. That claim, which lacks any evidence, may seem crazy. But it closely tracks the information that Russian lawyer Natalia Veselnitskaya tried to share with Donald Trump Jr., Paul Manafort, and Jared Kushner during their famous June 2016 meeting in Trump Tower. A memo Veselnitskaya brought to the meeting contended that three Browder associates were key financial sponsors of Democrats and bankrolled Clinton’s campaign at Browder’s behest. Trump and his backers have tried to dismiss the meeting as irrelevant and not a sign of Kremlin backing for Trump. But by repeating a version of the same dirt Veselnitskaya pushed at the meeting, Putin bolstered the case that the gathering was indeed related to Russian government support for Trump.