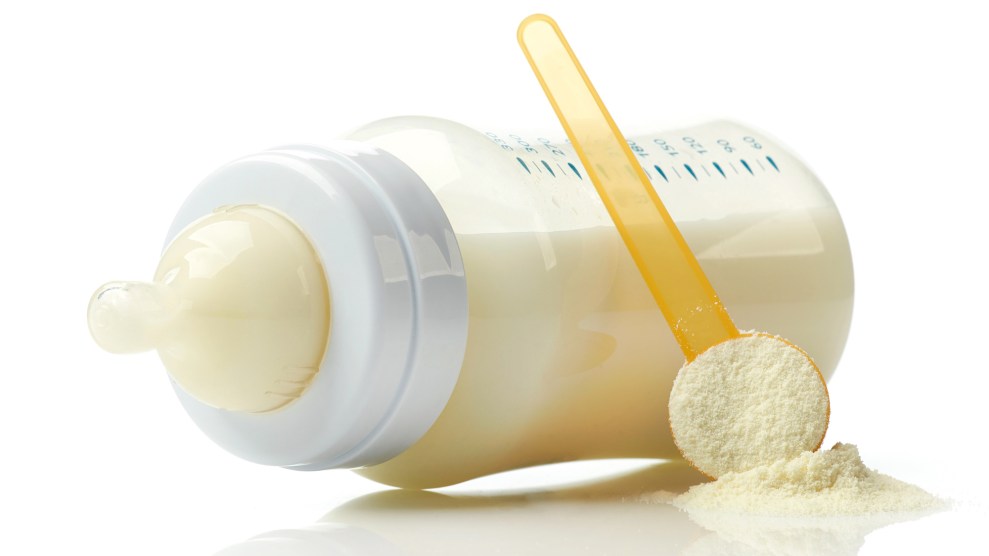 According to Trump himself, the account was just more “fake news” from the “failing” New York Times.

The failing NY Times Fake News story today about breast feeding must be called out. The U.S. strongly supports breast feeding but we don’t believe women should be denied access to formula. Many women need this option because of malnutrition and poverty.

But the World Health Assembly wasn’t trying to deny or even limit access to infant formula. Rather, the battle centered on a resolution stating that “mother’s milk is healthiest for children and countries should strive to limit the inaccurate or misleading marketing of breast milk substitutes,” the Times reports.

A broad scientific consensus backs those assertions. The World Health Organization states that “breastfeeding is so critical that it could save the lives of over 820,000 children under the age of 5 years each year.” The American Academy of Pediatrics cites “unequivocal evidence that breastfeeding protects against a variety of diseases and conditions in the infant.” The World Health Assembly’s concern about misleading promotion of infant formula is also grounded in fact. A recent report found more than 800 violations of the World Health Organization’s guidelines for marketing breast milk substitutes in 79 countries between 2014 and 2017.

The World Health Organization states that “breastfeeding is so critical that it could save the lives of over 820,000 children under the age of 5 years each year.”

For a recent paper, University of California-Berkeley economist and public health expert Paul Gertler and a team of colleagues looked at infant mortality rates in low- and middle-income countries, comparing regions that had access to infant formula with regions that didn’t. They found no impact, except under one condition: In communities that lack clean water, access to formula raised infant mortality by 9.4 per 1000 births—essentially, the availability of formula “led to more bad water getting to infants,” he said. “The formula [served] as a vector for bad water.”

In 1981—the height of a massive controversy over Nestlé’s aggressive marketing of formula to mothers in poor countries—the “availability of formula” resulted in approximately 66,000 infant deaths in areas with bad water, they found. In more recent years, Gertler told me, the annual death toll has dropped to about 25,000, driven by improved access to clean water in the Southern Hemisphere.

He added that although the group didn’t find negative effects on infant mortality on populations with clean water, that “doesn’t mean there’s no difference between breast milk and formula.” He said that plenty of other research suggests breastfeeding is healthier for kids and mothers alike.

Did the infant formula industry, which obviously benefits when women don’t breastfeed, push the Trump administration to take its mind-bending stand against encouraging breastfeeding? “Although lobbyists from the baby food industry attended the meetings in Geneva, health advocates said they saw no direct evidence that they played a role in Washington’s strong-arm tactics,” the Times reports. “The $70 billion industry, which is dominated by a handful of American and European companies, has seen sales flatten in wealthy countries in recent years, as more women embrace breastfeeding. Over all, global sales are expected to rise by 4 percent in 2018, according to Euromonitor, with most of that growth occurring in developing nations.”

Here in the United States, the industry is even more tightly concentrated. In a 2011 paper, US Department of Agriculture economists reported that three of those giants—Abbott, Mead Johnson, and Nestlé—own 98 percent of the US market—a figure echoed in a May 2018 New York Times Magazine exposé of black-market infant formula sales here in the United States.

Of course, dominating a multibillion dollar industry generates large profits—and plenty of money to invest in lobbying. Abbott, Mead Johnson, and Nestlé all have robust Washington, DC,  lobbying operations. In its latest lobbying disclosure document, covering the first three months of 2018, Abbott reported that it had lobbied Congress on “proposals regarding infant nutrition marketing.” The company also reported paying $50,000 in early 2018 to the Washington, DC, food and ag outfit the Russell Group to lobby Congress and the US Department of Agriculture on “matters related to federal food and nutrition policy, including those impacting infant formula.”

As for the Trump team’s push to stop the World Health Assembly from advising women to breastfeed and calling out misleading marketing of substitutes, Berkeley’s Gertler said he was “deeply disgusted” by the revelation. “There are things we should do because they’re the right thing to do, not because we get something out of it, and [promoting breastfeeding] is the right thing to do,” he said. “There is no one who claims infant formula is superior to breast milk.”