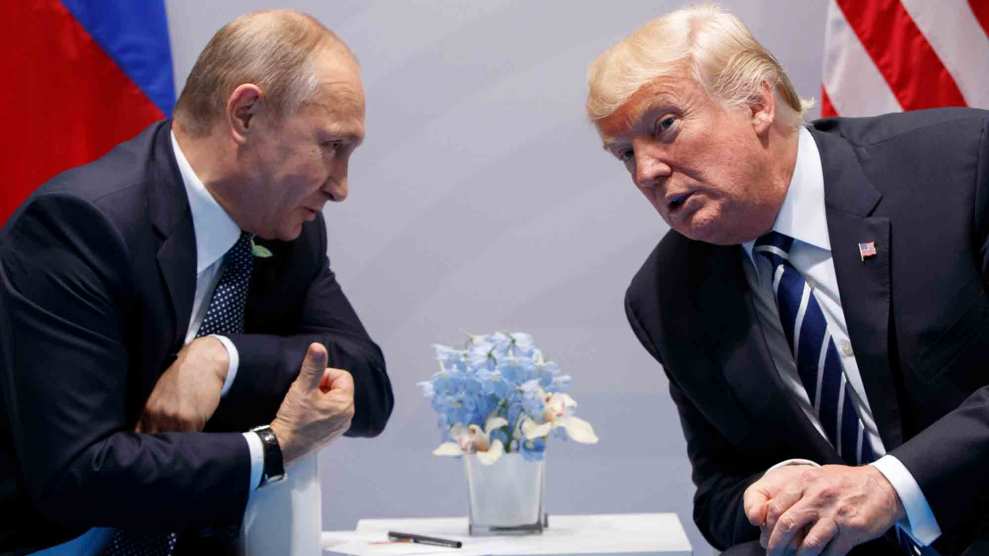 Donald Trump meets with Vladimir Putin at the G-20 Summit in Hamburg.Evan Vucci/AP

Listen to David discuss the president’s cover-up of the Russia scandal on the Mother Jones Podcast—the conversation starts at 17:05 on the player below.

In 1938, Winston Churchill published a collection of his speeches warning that his homeland was not adequately contending with the threat posed by Nazi Germany. The title: “While England Slept.” Eighty years later, a similar observation can be rendered concerning the United States. Much of the political and media elite and the citizenry seem to be sleepwalking past a horrific and fundamental fact: The current president of the United States has helped to cover up a serious attack on the nation. This profound act of betrayal has gone unpunished and, in many quarters, unnoticed, even as it continues. With Donald Trump about to meet Vladimir Putin on Monday—rewarding the thuggish authoritarian Russian leader with a grand summit in Helsinki—this is an appropriate moment to remember that their dark bromance involves a mutual stonewalling of wrongdoing.

Though the US intelligence community, most of Trump’s top national security aides, and Republican and Democratic congressional leaders have all agreed with the assessment that Putin’s regime mounted information warfare against the United States in 2016 to cause discord during the election and help Trump win the White House, Trump has continued to assist Putin’s brazen campaign of denial. Two weeks ago, Trump, in a tweet, gave credence to Putin’s claim that Moscow did not intervene in the election. “Russia continues to say they had nothing to do with Meddling in our Election!” Trump maintained. Instead, Trump insisted, the real scandal was that the Democratic National Committee in 2016 did not hand over to the FBI its servers, which were hacked by Russian intelligence. This server business is a phony Fox News-fueled scandal; the DNC provided copies of its servers to the bureau. And even if there were anything untoward about the server matter, it still would pale in comparison to a foreign adversary assaulting an American election with hacks and the dissemination of stolen material.

Russia continues to say they had nothing to do with Meddling in our Election! Where is the DNC Server, and why didn’t Shady James Comey and the now disgraced FBI agents take and closely examine it? Why isn’t Hillary/Russia being looked at? So many questions, so much corruption!

The aim of Trump’s tweet was to legitimize Putin’s disinformation and to divert attention from Putin’s operation to a distraction. In doing so, the president was stunningly serving Putin’s interests rather than those of the United States.

A week later, Trump went further. At a campaign rally, he sought to legitimize Putin himself. He mocked those concerned about Putin’s past as a KGB chief and exclaimed, “Putin is fine. He’s fine. We’re all fine. We’re people.”

Trump: "You know President Putin is KGB… Putin is fine. He's fine. We are all fine, we're all people" pic.twitter.com/EHJktcEZu4

Trump was defending the man who, according to US intelligence, ordered a covert assault on American democracy—and who has invaded Ukraine and overseen a corrupt government that has engaged in election fraud, suppressed dissent, committed human rights abuses, backed the murderous Syrian regime, criminalized discussion of gay rights, and plotted to undermine Western democracies. Trump’s own administration has blamed Moscow for the recent nerve agent attacks in the United Kingdom. Putin is not fine.

Yet the president embracing Putin was just another day in Trumpland. Republicans—once members of a party in which confronting Russia was as basic as breathing—didn’t bat an eye. Conservative commentators raised no outcry. Even most Democrats, if they bothered to respond to this latest outrage, managed not much more than an eye-roll. Within the media, the presses did not stop.

Much of the nation has become nonplussed about Moscow’s attack on America and numb toward Trump’s treachery. As Michael Isikoff and I noted in our recent book, Russian Roulette: Putin’s War on America and the Election of Donald Trump, Trump and his crew during the 2016 campaign aided and abetted the Russian plot by trying to collude with the Russians, by trying to set up a back channel with the Kremlin, and by denying over and over that Moscow was intervening in the election—even after Trump had been informed by US intelligence that Russia was behind the hack-and-dump operation and after the US government publicly declared Moscow was the culprit. All these Trump actions—public and private—conveyed a signal to Putin: Trump had no objection to the Russian operation. In Moscow, this could have been read as encouragement. As I explained a year ago, whether or not Trump or any of his lieutenants directly colluded with the Russian operation, there is no question that Trump and his aides in 2016 actively assisted Putin’s plot by repeatedly asserting no such attack was underway. These denials, which mirrored Moscow’s denials, clouded the picture and made a focused and bipartisan response to Putin’s scheme much more difficult. This foundational element of the Trump-Russia scandal—Trump facilitated the attack by adopting Putin’s line—has not sufficiently shaped the national debate.

Nor has the seriousness of the Russian assault been fully absorbed. This intervention orchestrated by a foreign adversary changed the course of American history by helping Trump attain the White House. Yet it is too often referred to as “meddling”—not as an act of information warfare that was part of Putin’s long-term strategic plan to weaken the West. According to focus groups conducted by the Clinton campaign in the weeks before Election Day, swing voters in key states considered the result of Putin’s operation—the daily posting of John Podesta’s emails stolen by Russian hackers—not evidence of a foreign foe’s intervention but a reminder of Hillary Clinton’s own (and unrelated) email controversy. Moreover, the public dissemination of the Podesta emails dominated much of the coverage of the Clinton campaign in the final stretch of the election and set the stage for FBI Director James Comey’s late-in-the-game revival of the Clinton email investigation. Whether the Russians meant to or not, they succeeded in focusing renewed attention on a key vulnerability of Clinton. In a tight race—the switch of 78,000 votes in three states would have reversed the result—Putin’s attack certainly was one of several factors that determined the outcome.

Putin’s interference, however, has not generated universal or sustained outrage. Trump and Fox Newsers act as if it never happened. Eight Republican senators spent July 4 in Moscow and met with Foreign Minister Sergei Lavrov, who has dismissed any talk of Russian intervention in the 2016 election as “claptrap.” The trip was cast as an effort to improve US-Russian relations. Sen. Richard Shelby (R-Ala.), one of the members of the Moscow delegation, said the United States and Russia did not “necessarily need to be adversaries.” The point, he remarked, was to “strive for a better relationship” and not “accuse Russia of this or that or so forth.” It seemed he was willing—even eager—to put aside Putin’s attack.

Leading congressional Democrats—besides Rep. Adam Schiff (D-Calif.) and other Ds on the House intelligence panel—have generally not raised a steady fuss about Trump and Russia. They have not strived to make the momentous facts of the Trump scandal a driving narrative of the ongoing political debate. They have not clearly, loudly, and continuously pointed out the indisputable: Trump has provided comfort to an enemy. On Tuesday, hours after Trump landed in Brussels for a NATO summit, Sen. Jack Reed (D-R.I.) did lead the Senate to a whopping 97-to-2 vote on a non-binding resolution that reiterated support for NATO and called on the Trump administration to quickly adopt a government-wide strategy to thwart Russian intervention in the United States and other democracies. Reed deserved credit for achieving this Trump-rebuking, bipartisan victory, but this step was hardly as forceful a counter to the president’s pro-Putin propaganda as was warranted.

In the past, it would be unthinkable for Republicans to go so light on Russia or any other overseas foe. But one reason they can get away with this is that the story has shifted. Though the investigation of special counsel Robert Mueller commands media attention, there has not been a major public examination of the Russian attack. The probe conducted by the GOP-led House Intelligence Committee devolved into an acrimonious clown show, with Republicans focused mainly on diversions (such as the FBI’s use of secret surveillance warrants). The Senate Intelligence Committee’s inquiry, which is ongoing, has been a quiet affair, with few public hearings. When the committee issued a preliminary finding noting that it has concluded that the US intelligence community was correct to assess that Putin had tried to help Trump, it released the report on the afternoon before July 4—a move guaranteed to attract less attention. The Washington Post ran a short story about the Senate report on the inside of the paper. It was not front-page news that Senate Republicans had confirmed the finding—disputed by Trump and his minions—that Putin had plotted to boost Trump’s chances.

So as Trump prepares (yeah, right) for his sit-down with Putin—which is expected to include a private one-on-one with no aides present—much of the nation has lost sight of the big story. With Trump’s repeated cries of “witch hunt” and his lapdog Republicans slavishly concocting false narratives to cover for the boss, they have managed to convince Trump’s tribalized Fox-fed followers there is nothing to see here. And for many others, the scandal is not presented or viewed as the original sin and paramount controversy of the scandal-ridden Trump presidency.

It may be ineffective or counterproductive to shout out each day, “Where’s the outrage?” Yet the public record remains: Trump and Putin have jointly worked to disappear perhaps the greatest crime ever committed against American democracy and their respective complicity in this villainy. And it is crucial for the Republic that they not succeed.