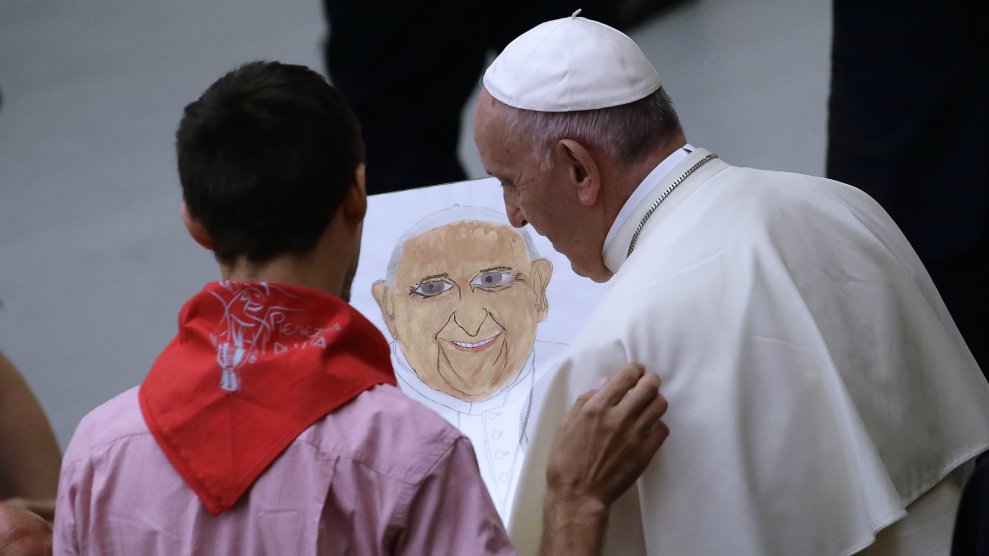 From the moment he emerged in an all-white cassock on March 13, 2013, and greeted thousands of revelers in St. Peter’s Square, Pope Francis has embodied many of the greatest tensions in the modern Catholic Church. He holds immense power as the de facto monarch at the head of the most influential religious institution in the world, but he has rejected the trappings of luxury other popes have enjoyed. He may have opened the door to priests identifying as gay in a reversal of his predecessor’s position, but he continues to maintain the church’s rigid opposition to stem cell research and abortion—the latter of which he compared to the Nazi eugenics program. But in an unusual act that signaled his willingness to stray from doctrine, Francis extended to all priests the power to forgive women who have abortions, rather than limiting it to just bishops.

The 81-year-old pope has had many significant moments during the five years he has been in charge, from the call to action on the environment and climate change in his first papal encyclical to an in-person meeting with a group of Muslim refugees from Burma. But over the last month, he has quietly changed the church for the foreseeable future, guaranteeing its move away from its conservative past into a more progressive future. Here’s a rundown of what the most influential pope in generations has been doing while many of the world’s 1.3 billion Catholics haven’t been paying attention:

Filled the top ranks of church leadership with ideological allies

The cardinals of the church, known for their scarlet robes and fancy hats, directly report to the pope. If the pope should die in office or, as in the case of Pope Benedict XVI, retire, these are the men who will crowd into the Sistine Chapel and elect a successor from their own. More than 200 men make up the College of Cardinals, but just 125 are younger than 80 and currently eligible to vote in the next papal conclave. The single easiest way for a pope to secure his legacy is by appointing like-minded cardinals who are of a voting-eligible age.

Since he assumed office, Francis has brought in a number of younger men to fill these offices. Now, with the announcement of 14 new cardinals last week, Francis will have appointed 47 percent of the electors who will select the next pope. Many of the promotions have gone to auxiliary bishops in smaller or less traditional communities, a departure from the tradition of appointing candidates who have major leadership roles in large Catholic cities. In Philadelphia, for example, Francis passed over Archbishop Charles Chaput despite a 93-year tradition of cardinals presiding over Philadelphia’s community of Catholics. Chaput is an outspoken conservative leader who has openly questioned the pontiff’s public statements.

Among the cardinals who have taken office during Francis’ term is 66-year-old Joseph W. Tobin, a casual weightlifter who is the archbishop of Newark and has been at the forefront of church outreach to LGBTQ members. Other selections have been from Iraq, Pakistan, and Japan, far outside the usual geographic regions such as Europe and the Americas, which have tended to dominate the College of Cardinals.

Pushed out an embattled set of Chilean bishops

As Francis has filled the church hierarchy with ideological allies, he has purged its ranks of scandal-prone bishops. On June 11, he accepted the resignations of three bishops in Chile after meeting with church leadership there in the middle of widespread allegations that church leaders covered up instances of sexual abuse.

The pope wrote to Chilean bishops in April to acknowledge “serious errors of assessment and perception” in his defense of Juan Barros Madrid, a bishop accused of covering up abuse whom the pope had long defended. Francis had previously called allegations against the bishop “slander.”

After Francis met in person with Chile’s Catholic leaders in May, in an unprecedented move, all 34 of the country’s bishops offered to resign. So far, he has only let three bishops step down, but he told Reuters he would possibly accept some additional resignations. The urgency with which Francis changed course in Chile has silenced some critics, who have characterized the pope’s no-tolerance policy for concealing abuse as more talk than action.

In a rare interview with Reuters, when the forced separation of migrant children from their parents was dominating the headlines, Francis said June 20 that the Trump administration’s policy was “immoral” and “contrary to our Christian values,” adding, “Populism is not the solution.” This is not the first time Francis has criticized President Donald Trump, whom he called “not Christian” during the 2016 presidential campaign, nor the only time he has called for fairer treatment of migrants. But the tone of his attack on a specifically American policy was unusual—recent popes have typically not ventured into partisan policy issues.

He followed the interview with a series of tweets:

A person's dignity does not depend on them being a citizen, a migrant, or a refugee. Saving the life of someone fleeing war and poverty is an act of humanity. #WithRefugees @M_RSection

We encounter Jesus in those who are poor, rejected, or refugees. Do not let fear get in the way of welcoming our neighbour in need. #WithRefugees @M_RSection

Francis’ predecessor, the German-born theologian Benedict XVI, once called homosexuality an “intrinsic moral evil” and an “objective disorder.” Francis, who famously asked, “Who am I to judge?” in reference to LGBTQ-identifying priests, made tangible steps in June toward softening the Catholic stance on LGBTQ issues.

For what appears to be the first time in an official church document, the Vatican used the term “LGBT” to refer to gay people, which marks a dramatic change from its previous description of them as “persons with homosexual tendencies.” Church officials also extended an invitation to the Rev. James Martin, a New York-based priest who has become one of the leading advocates for greater queer inclusivity within the church, to present at the World Meeting of Families in Dublin this summer. One of the most prominent events on the Catholic calendar, the last World Meeting welcomed hundreds of thousands of believers to Philadelphia in 2015 to see Francis deliver an outdoor Mass.

A closed-door conference June 9 with oil executives offered Francis an opportunity to focus on climate change and other environmental issues that have animated his papacy thus far.

“We know that the challenges facing us are interconnected. If we are to eliminate poverty and hunger…the more than 1 billion people without electricity today need to gain access to it,” the pope reportedly told executives and investors at a meeting in Vatican City. The gathering is the latest example of Francis exerting his influence to advocate for the environment. During a meeting with Trump last May, the pope gave the president his encyclical on the environment as a gift, and after the United States withdrew from the Paris climate agreement, Francis “implicitly criticized” the decision during a speech to United Nations officials.

Finally, Francis used the occasion of the UN International Day in Support of Victims of Torture on June 26 to denounce the practice as a “mortal sin” in a series of tweets.

Torture is a mortal sin! Christian communities must commit themselves to helping victims of torture.