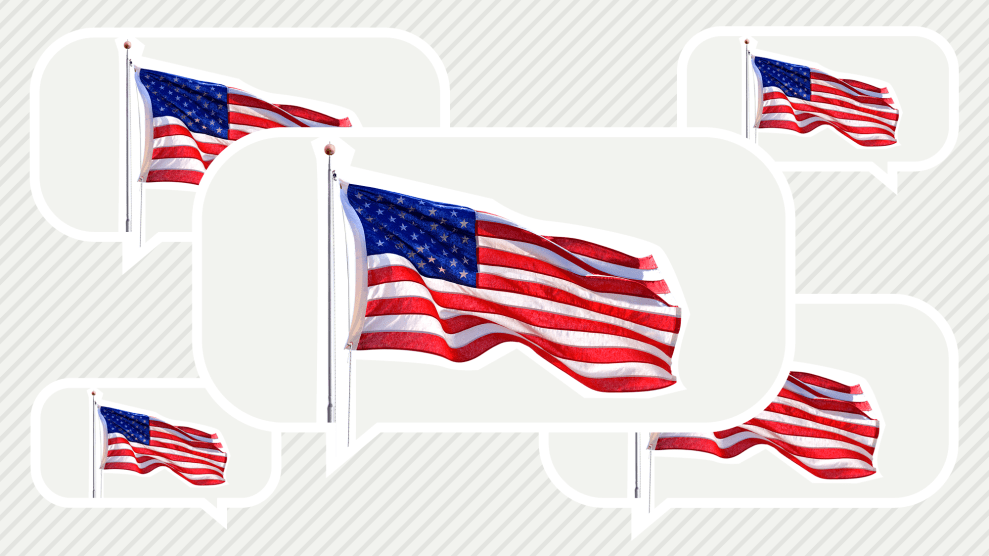 It’s a fraught time to live in America. Its borders have become militarized war zones, while larger existential questions loom just under every news story: Who has a right to be an American? And why?

This Fourth of July, we were reminded by abolitionist Frederick Douglass‘ 1856 referendum on American slavery and freedom that the question of who is allowed to lay claim to America isn’t a new one. And we asked you, our readers, what it means to be an American in today’s politically hostile climate. Plenty of you wrote us to say how ashamed you are to live in a country run by an administration that has decided to pulled out of the Paris Climate Accord and doubled down on racist and anti-immigrant policies. Many of your responses were colored by what you’re seeing out of Washington, but you also showed us it’s not just that simple.

For some, there’s pride.

“To me it means having a Constitution that confers equality before the law, and the right to participate in the government by voting and the guarantees of rights such as freedom of speech. These values are violated in ways large and small, but without the theory of them we would have no redress against injustices.” — Anna Hargrove, San Marcos, Texas

“If being American means you act like your Facebook persona all the time, then it would be impossible to get along with people. [On Facebook] You are either attacking people for their wrong opinions or getting attacked because you don’t agree with them 100 percent. But I know for a fact that people tend to not act like that in real life. The America I live in tends to have people of differing opinions come together to make progress. Getting along is hard work and Americans do that everyday and try to make real change. Of course, I’m saying this from my bubble, so take that for what you will.” — Joseph, Brawley, California

Many of you agreed it’s important to acknowledge fear.

“As a black man that moves about in this so-called ‘Civil Society’ I am always cognizant of the possibility that I could be murdered for no reason other than my skin color. And the perpetrator, if he or she is white, there would be a reason that my death is justified and celebrated by those who hate me for merely existing.” — Chuck Taylor

“Being an American under Trump’s regime is heartbreaking, terrifying and makes me want to apologize to every person of color living here or having anything to do with us. I am ashamed to be an American right now. I sign petitions, make calls and donate what I can and hope that things aren’t as hopeless as they look. I’m of ‘blue blood’ southern descent and knew that even the most educated people there are still fighting the Civil War, but the level of hate that is rising to the surface is unbelievable. I’m 80 years old and am so sad that I may not live to see our country be a place to proud of again.” — Rachel Gullett, Arizona

“Our family of four came to the US as ‘displaced persons’ (DPs) in 1954, after escaping from Ukraine to Berlin where my sister and I were born, we also lived in Vienna during and after WWII. When we became citizens, we felt like we finally belonged somewhere since my parents were without citizenship for a long time. To be American meant being what this country stood for before the Trump administration. I am afraid of the direction in which this country is being steered, feeling helpless since no one seems to understand the seriousness of Trump’s love of Putin and his total disregard/disrespect for our oldest and truest allies.” — Natalie Jarnstedt, Greenwich, Connecticut

“I am a 78-year-old woman who was once proud to be an American. It had seemed to me that anyone could work hard and achieve some success. And there were government programs to help those from poorer backgrounds. I believed that, for the most part, our legislators were looking out for all of us. I’ve learned over the years that this wasn’t quite completely true and became a bit disenchanted with the way our country was being run. But now under the Trump administration I am extremely disappointed in our country. We don’t seem to be a world leader in any area any more. Now the rich, the cowardly and the insane appear to be in charge of everything and I am very much afraid of the future.” — Anonymous

“It means loving this country for what we can be, and parts of who we are, but acknowledging how flawed we are and can be. Patriotism is living [in]your country but not blindly believing in everything that is done in her name.” — Craig Kreiser, via Facebook

“Being American means that it is my responsibility to help give to others what has been so freely given to me. My ancestors came here, starving, from Ireland and were allowed to make America their home. Who am I to say others should not have the same opportunity?” — Kathleen Olund, Duran, Michigan

And this year’s midterm elections are really, really important.

“Vote this November! Don’t let one more 4th of July come with the country being ruined. Every single week it gets worse. Last 4th of July if someone would have told you what would be happening today—you wouldn’t believe it. Just imagine how much damage another year or two will bring.

“I am still proud to be an American. Having ‘Orange Mussolini’ in the White House is embarrassing, but I’m looking forward to the people rising up to correct this embarrassment! (by voting and non-violent protest!) PEACE/LOVE!” — Louise Sumrell, Greenville, North Carolina

The responses above have been lightly edited for length and clarity.