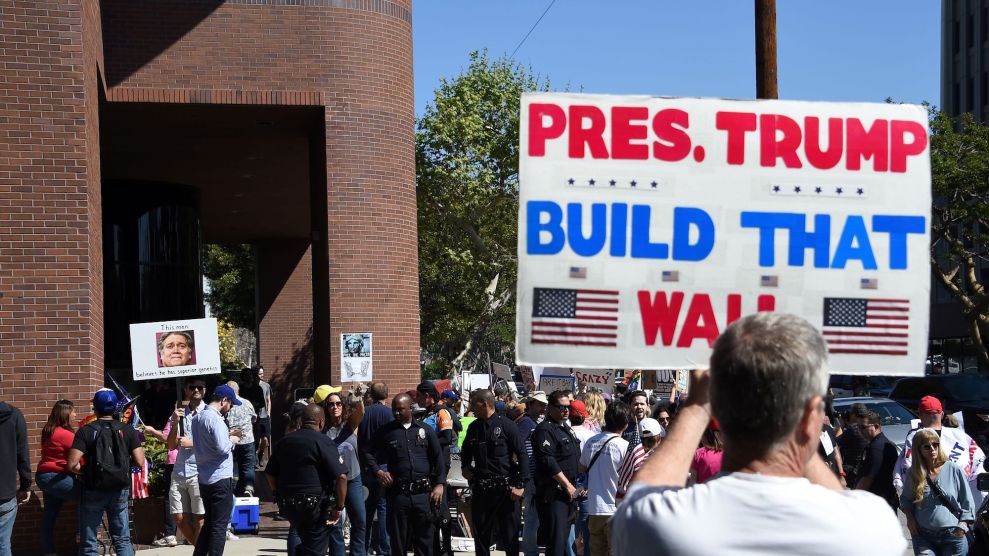 A Trump supporter faces people demonstrating against Breitbart News in March 2017 in the Brentwood area of Los Angeles, California.Robyn Beck/Getty

In June 2013, the Congressional Budget Office released its analysis of the bipartisan “Gang of Eight” immigration reform bill that would soon pass the Senate with 68 votes. The CBO, Congress’ official scorekeeper, found that the bill would cut the federal deficit by $175 billion over 10 years while giving millions of undocumented immigrants a path to citizenship. Ian M. Smith, an emerging anti-immigrant activist, saw things differently.

In a column for the conservative outlet PJ Media, Smith wrote that the CBO had overlooked a key piece of information: the cost of providing Obamacare to Mexican immigrants who are overweight. He suggested that the obesity rate in Mexico, which in reality was comparable to that of the United States, stemmed from Mexicans’ genes and was unlikely to decrease. The CBO, he argued, failed to account for this phenomenon in making its cost projections, and so“the best preventative solution might be to kill the amnesty bill.”

In October, Smith moved from the nativist Immigration Reform Law Institute (IRLI) to the Department of Homeland Security, where he worked on immigration policy. He was hired despite a long record of writing columns that portray immigration as an existential threat to the United States and an environmental disaster. Smith left DHS on Friday, according to a DHS spokesperson.

On Tuesday evening, The Atlantic published excerpts of emails that connected Smith to prominent white nationalists, including Richard Spencer. One email chain from October 2015 showed Ben Zapp, a real-estate agent with ties to the alt-right, inviting Smith and men affiliated with white nationalism to dinner at his apartment. He wrote that the gathering would “remain judenfrei,” a German term meaning “free from Jews” that was used during the Holocaust to describe the Nazis’ genocidal ambitions. Smith, who was working for IRLI at the time, replied with some German of his own: “They don’t call it Freitag [Friday] for nothing.” He added that he hoped to talk to Matt Parrott, the spokesman for a now-defunct American neo-Nazi party, later that night.

DHS press secretary Tyler Q. Houlton said in a statement responding to inquiries about Smith that DHS is “committed to combating all forms of violent extremism, especially movements that espouse racial supremacy or bigotry. This type of radical ideology runs counter to the Department’s mission of keeping America safe.” DHS declined to say why Smith left or whether the agency was aware of the contents of his political columns.

Smith is one of at least four veterans of IRLI and its sister organization, the Federation for American Immigration Reform (FAIR), appointed to political positions at DHS. FAIR calls for dramatic cuts to legal immigration and was founded by John Tanton, who once told a donor, “One of my prime concerns is about the decline of folks who look like you and me.” Tanton still serves on FAIR’s national advisory board.

That someone with Smith’s radical anti-immigration ideology was hired by DHS highlights just how eager the Trump administration has been to staff agencies with nativist hardliners.

Julie Kirchner, FAIR’s former executive director, is responsible for helping people navigate the immigration system in her role as ombudsman for US Citizenship and Immigration Services, the DHS agency that oversees legal immigration. In October, FAIR’s government relations director, Rob Law, joined USCIS as a senior policy adviser. Elizabeth Jacobs, another FAIR lobbyist, was hired by USCIS in February. (Jacobs’ author page on ImmigrationReform.com, a blog run by FAIR, has been deleted and the byline on posts she and others wrote has been changed to “FAIR Staff.”)

On July 30, in response to a public-records request under the Freedom of Information Act, DHS gave Mother Jones a list of all the political appointees who had joined the agency since President Donald Trump took office. But the department’s press office failed to respond to repeated requests for confirmation that the Ian Smith on that list was the same one who had worked at IRLI, or that he was still working at DHS. After four weeks of requests, a DHS official who requested anonymity said on Tuesday that Smith had ceased to work at DHS as of last Friday.

IRLI said earlier this month that it could not provide any information about whether Smith was working at DHS. On Wednesday, IRLI told Mother Jones in a statement that the organization currently has no ties to Smith and repudiates the views of the people with whom he was connected in the Atlantic story. The group added, “If it would come to our attention that any employees are associated with individuals and organizations that hold noxious views on matters of race and ethnicity, that may be grounds for termination.”

Biographical details about Smith mostly come from a Facebook page and a December 2016 interview with FOIA Advisor, a conservative-leaning website that provides information about filing public information requests. The Facebook page that included his name, picture, and education history was recently deleted or blocked from public view.

Smith’s background bears a striking resemblance to that of America’s most influential immigration critic: White House senior policy adviser Stephen Miller. Both Smith and Miller hail from liberal enclaves with large immigrant populations—Vancouver, Canada, and Santa Monica, California, respectively—and have a penchant for trolling the liberal values they grew up around. Smith studied English literature at the University of British Columbia and likes to cite Karl Marx and Slovenian celebrity-philosopher Slavoj Žižek as fellow immigration skeptics. On his Facebook page, he described himself as a “Continental gentleman.”

Smith is one of at least four veterans of IRLI and its sister organization, the Federation for American Immigration Reform, appointed to political positions at DHS.

After college, Smith lived in Hong Kong for seven years. He was critical of Hong Kong’s “nonsensical” birthright citizenship, a policy that is central to the US immigration system. Smith argued in a column for the right-wing site Frontpage Mag that the mainland Chinese nationals whom many locals considered “locusts” were abusing Hong Kong’s medical system. In the same post, he railed against a proposal to provide Obamacare to undocumented immigrants protected by Deferred Action for Childhood Arrivals, or DACA. He wrote that DACA recipients were “people who not only broke into our sovereign nation, but have done huge damage to our social security system and cultural fabric.” The average DACA recipient came to the United States at six years old.

Smith went on to attend law school in Australia and began writing columns about US immigration policy after graduating in 2012. The list of problems he attributed to immigration was long. He warned that Latinos would undermine support for Israel, citing a poll showing that Latinos in the United States were less supportive of Israel than American Jews. He also claimed that cutting immigration was the best way to reduce greenhouse gas emissions. “It is estimated that the carbon footprint of the average immigrant is four times higher than it would have been had they remained at home,” he wrote.

In January 2015, Smith began working for IRLI. In his interview with FOIA Advisor, Smith described his new employer as a “nonprofit law firm that represents people harmed by the government’s failure to regulate immigration.” He helped run IRLI’s FOIA program, but he also continued corresponding with people closely linked to America’s white-nationalist movement. In a March 2015 email excerpted in The Atlantic, Smith wrote that he wasn’t able to attend an event held by Spencer’s National Policy Institute because he was out of town. In May 2016, he recommended a media job applicant who he said “writes for Radix, Amren [American Renaissance], VDare and Chronicles under a pseudonym.” All four publications either explicitly back white nationalism or publish writers who do.

In November 2015, Smith wrote in the Daily Caller that Hispanic Americans could undermine support for Israel and urged two conservative Jewish billionaires “to appreciate there may be Zionist considerations to ensuring America’s historic character as well.” He also argued in the Daily Caller that the US Conference of Catholic Bishops was cynically pushing for open borders in order to gain congregants. He concluded that piece by citing a turn-of-the-century English writer: “As G.K. Chesterton would say, these are Christians who really should have been eaten by lions.”

Later that November, Smith compared the influx of Syrian refugees into Europe to the plot of a 45-year novel by the French writer Jean Raspail, The Camp of the Saints, which is a favorite among white nationalists. The book’s plot centers on a horde of 800,000 Indians floating toward the French Riviera and led by a man called the Turd-eater who eats feces. Raspail implies that the solution to the invasion would be to massacre the Indians upon arrival, but empathy gets in the way, and the Indians conquer France. Smith argued that Europeans were “dealing with their Camp of the Saints-style unarmed invasion” as Syrian refugees fled civil war.

In June 2016, Smith was invited to an event scheduled to coincide with a visit from Wayne Lutton, the editor of Tanton’s journal The Social Contract Press, which has published writings by white nationalists. (It also issued a republication of The Camp of the Saints in 1994.) Lutton frequently warned in the 1990s that white Americans were being overrun by immigrants, once saying, “We have abandoned our cities to people who haven’t even come up with a written language or the use of the wheel.” Also on the invite list for the event was self-described “white advocate” and American Renaissance founder Jared Taylor. A source told The Atlantic that Smith attended the event, although Smith told the magazine that he “didn’t attend any of the events you’ve mentioned.”

Smith is one of only nine political appointees to DHS’s policy team, according to the DHS staff list. Other members of the team have included Jared Culver, the former legislative director for Rep. Steve King (R-Iowa), who retweeted a neo-Nazi and previously said DACA recipients have “calves the size of cantaloupes because they’re hauling 75 pounds of marijuana across the desert”; Katie Gorka, who criticized the Obama administration for its “emphasis on Islam as a religion of peace” and is married to ousted White House adviser Sebastian Gorka; and Frank Wuco, who role-played as a fake jihadist while warning Americans about the dangers of Islam.

It is unclear what Smith did in his 10 months at DHS or how influential he was. But his columns reveal how he approached immigration policy. In April 2017, Smith wrote in The Hill that “injecting empathy into policy decisions can be disastrous” and lamented that immigrant advocates engendered empathy by focusing on immigrant children. One year later, Smith’s vision of an immigration agenda free from empathy was realized in a policy that separated more than 2,600 children from their parents.